People often ask how the Mesoamerican advocates get away with repudiating the prophets. There are lots of reasons, but one is effective use of M2C* artwork.
This starts with the Correlation Department.
I'm referring to the employees who work there, not any Church leaders.
I've explained before how the Correlation Department promotes M2C by refusing to acknowledge, let alone allow publication of, the teachings of the prophets and apostles about the New York Cumorah. Here's the process:
1. First, the Correlation Department suppresses the teachings of the prophets, beginning with Letter VII and continuing through General Conference addresses and materials published by the Church in the past. You can't find any references to the New York Cumorah on lds.org. today. (Fortunately, Joseph Smith had Letter VII copied into his personal history (link here) so even the historians and the Correlation Department can't completely erase the New York Cumorah, but you won't see it published in the Ensign or in any Church manuals, article, materials, or even artwork.)
2. Second, the Department claims the Church is "neutral" on the geography issue. It quotes statements from Church leaders that relate to Book of Mormon geography other than the hill Cumorah in New York, and then tells Church members these statements also apply to Cunorah. In reality, Church leaders have consistently and persistently taught two things: (i) Cumorah is in New York and (ii) we don't know where the rest of the events took place.**
3. Third, the Department approves only materials that promote M2C, such as the artwork featured below. They're especially targeting Primary children with M2C material such as this:
https://www.lds.org/manual/book-of-mormon-stories/chapter-43-jesus-christ-appears-to-the-nephites?lang=eng
4. Finally, the Department knows it is anything but neutral; it has promoted links on lds.org to organizations such as Book of Mormon Central which is dedicated "to increase understanding of the Book of Mormon as an ancient Mesoamerican codex" and other organizations that have an editorial policy of promoting M2C while (i) excluding other ideas and (ii) repudiating the prophets. In fact, there is not a single link on lds.org to any outside group or source that supports the teachings of the prophets about the New York Cumorah.
At least that is consistent. The Correlation Department doesn't even want members of the Church to know what the prophets have taught about the New York Cumorah.
_____
M2C paintings.
Two paintings that promote M2C are on prominent display throughout the Church. One is so valuable that the Correlation Department doesn't make it available for download, but it does display it in Church buildings everywhere, including at the Hill Cumorah Visitors Center in New York, as I discussed here: http://bookofmormonwars.blogspot.com/2018/04/visitors-to-cumorah-never-learn-what.html. 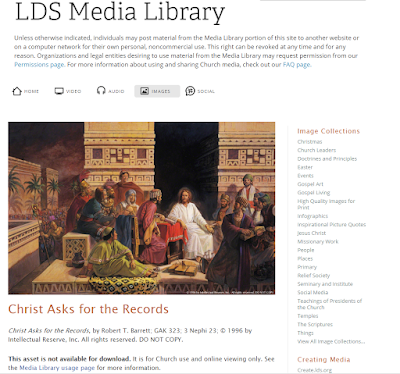 This painting, titled "Christ Asks for the Records," specifically cites 3 Nephi 23. This is the passage where Christ, at the temple in Bountiful, meets with his twelve disciples and asks about their records.

You can see this here:
https://www.lds.org/media-library/images/bring-forth-the-record-39676?lang=eng

If you look closely, you can see several sets of gold plates and rolled up manuscripts in this painting.

The painting teaches, as clearly as art can teach, that Christ visited the twelve Nephite disciples in Mesoamerica. Of course, the New York Cumorah does not exclude any other location for Bountiful.

Except the M2C scholars who continue to promote Mesoamerica insist that the New York Cumorah is too far away to be the "real Cumorah." In fact, here's how a prominent BYU scholar described those Church members who still believe what the prophets and apostles have consistent taught. 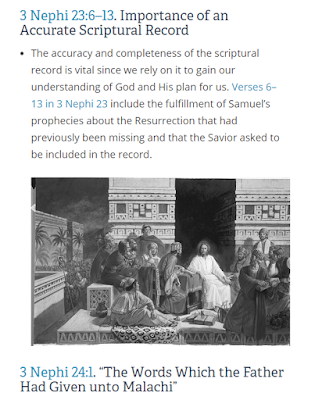 A black and white version of Christ in Mesoamerica is included in the Book of Mormon Student Manual for Relition 121-122. (This manual also has Christ visiting the Nephites at a Mayan temple on the cover.)
You can see the painting here:
https://www.lds.org/manual/book-of-mormon-student-manual/chapter-45-3-nephi-23-26?lang=eng
Note the irony of the lesson: "The accuracy and completeness of the scriptural record is vital since we rely on it to gain our understanding of God and His plan for us."
You might think the accuracy and completeness of the teachings of the prophets would also be vital, but it's not for the Correlation Department if those teachings contradict M2C.
You might not have seen my comment on this: http://bookofmormonwars.blogspot.com/2018/05/watching-general-conference-with-your.html
With artwork such as this, the Correlation Department is doing everything possible to imprint M2C on the minds of the Latter-day Saints, all the while pretending to be "neutral" about Book of Mormon geography.
Of course, if they were actually neutral, they would at least tell students (and missionaries and members generally) what the prophets have taught.
The Correlation Department, staffed by BYU/CES graduates, has implemented the teachings of the intellectuals instead of the teachings of the prophets.
_____
The second painting is even more ubiquitous. Here's one of many sites where you can see it:
https://jesuschrist.lds.org/testimonies-of-him/articles/the-living-christ-the-testimony-of-the-apostles-of-the-church-of-jesus-christ-of-latter-day-saints?lang=jpn&cid=HP16TLC

I've written about this one before:
http://bookofmormonwars.blogspot.com/2018/02/cumorah-6-education.html
There is nothing "neutral" about this painting at all, unless you want to consider Chichen Itza in the background, which wasn't built until around 600-900 A.D. Or maybe the mountains in the background represent Machu Picchu in Peru. I like to say that maybe the clouds represent North America.
But seriously, everything about this painting is wrong. The destruction occurred on the fourth day of the first month of the thirty and fourth year. But the painting shows rubble strewn on the steps even though Christ visited "in the ending of the thirty and fourth year." (3 Nephi 10:18) We think this means at the ending of the Jewish year in October, but that's another topic. The point is, the people had months to clean up and converse and repent, etc.
Plus, the scripture says the people were gathered "round about the temple" when Christ visited. Yet this painting depicts the remnants of a decidedly non-Christian Mayan temple, with an intact Chichen Itza in the background.
The best that can be said about this painting is that it depicts one of Christ's visits to his other people around the world, but it definitely doesn't depict a visit to a Nephite (Hebrew) temple.
Nevertheless, the Correlation Department has made this the pre-eminent depiction of the Book of Mormon. http://bookofmormonwars.blogspot.com/2018/02/cumorah-6-education.html
It's no wonder that so many people are confused, and so many non-LDS won't take the Book of Mormon seriously.
_____
* M2C is the Mesoamerican/two-Cumorahs theory that teaches Joseph, Oliver and all the prophets and apostles who have taught Cumorah is in New York are wrong because the "real Cumorah" of Mormon 6:6 is somewhere in southern Mexico.
**It is a sound position to say we don't know where the other events took place because there are hundreds of possibilities for sites. In considering the dozens of named sites in the Book of Mormon, we'd have to choose among the million plus earthworks in North America.
Posted by jonathan3d at 7:30 AM