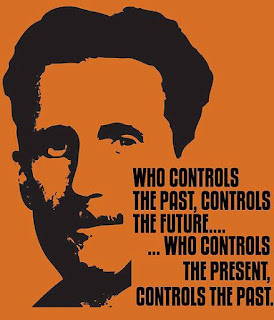 It's not an easy thing to persuade LDS people to reject the prophets. We're amazed at how effective the M2C citation cartel has been at accomplishing its goal to persuade the people that the prophets are wrong.

But those of us who have been around for a while recognize the tactics. George Orwell described them in his book, 1984. We all read his book in high school and college so we could recognize how Newspeak works.

In the last few years, I've found that my college students are largely unaware of 1984. I infer that high schools have stopped teaching it.

Students have no idea what Newspeak is.

Certainly we see these tactics at work in the media.

And we see the same tactics being employed by Book of Mormon Central America as it promotes the Mesoamerican/two-Cumorahs theory (M2C).
_____

I've only met a few of the advisers, volunteers and employees at Book of Mormon Central America. All of them are outstanding individuals, smart, diligent and faithful. Many of them are BYU students or recent graduates of BYU. Others are BYU professors and employees of CES and COB. You can see them here:

What puzzles us is how they can participate in an organization that is based on rejecting the prophets.

How is it possible?

If the good people at Book of Mormon Central America realized what's going on, they would repudiate the M2C intellectuals instead of the prophets.

The legal organization behind Book of Mormon Central is the Book of Mormon Archaeological Forum, Inc., a 501 (c) 3 non-profit public charity chartered in the state of Utah in 2004.

But when you go to the BMAF website, you see this:

This past year BMAF was acquired by Book of Mormon Central and the newsletters discontinued.

George Orwell would be proud.

That's a minor detail, but it exemplifies the way these people use Newspeak. When you cut through it, Book of Mormon Central America is owned by BMAF.
_____

The next example of Orwellian tactics is the "Mission Statement" of Book of Mormon Central America, which you can read here:

Book of Mormon Central (BMC) exists to invite all people, especially the rising generation, to:
This is a laudable set of goals, shared by all faithful LDS. They are inpirational and even quote scriptures!

These goals are designed to dupe participants into thinking they are engaged in the pursuit of truth.

But the last one is pure Newspeak, because you have to look at the mission statement of the corporate owner to understand what is meant by "scholarly evidence."
_____

And we've seen that, by its own admission, the purpose of M2C is not to seek the truth.

Instead, the purpose is set out in the Mission Statement of BMAF, the corporate owner of Book of Mormon Central:

The Book of Mormon Archaeological Forum (BMAF) is a 501(c)(3) not for profit organization dedicated as an open forum for presentation, dissemination, and discussion of research and evidences regarding Book of Mormon archaeology, anthropology, geography and culture within a Mesoamerican context.

[Now you see why they censor and attack anyone who still believes the prophets. As BYU Professor John Sorenson explained in Mormon’s Codex (Deseret Book, 2015), p. 688, “There remain Latter-day Saints who insist that the final destruction of the Nephites took place in New York, but any such idea is manifestly absurd. Hundreds of thousands of Nephites traipsing across the Mississippi Valley to New York, pursued (why?) by hundreds of thousands of Lamanites, is a scenario worthy only of a witless sci-fi movie, not of history.”

Getting back to the M2C mission statement:

Our goals are
(1) to increase understanding of the Book of Mormon as an ancient Mesoamerican codex,
(2) to correlate and publish works of LDS and CofC scholars,
(3) to help promote unity and cooperation among scholars and students of the Book of Mormon, and
(4) to provide a forum where responsible scholars can present current ideas and discoveries.

This reads like something Big Brother would announce in Orwell's 1984. It's pure Newspeak.

M2C seeks to "help promote unity and cooperation" by suppressing, censoring, and ridiculing those who still believe the prophets.

M2C defines "responsible scholars" as those who share the goal of framing the Book of Mormon "within a Mesoamerican context."

Using good Newspeak, Book of Mormon Central America acts as recdep* by creating an "archive" that aims to promote and legitimize M2C.

The fundamental premise of M2C is that the prophets are wrong about the New York Cumorah. Book of Mormon Central America uses all kinds of sophistry to persuade faithful LDS to repudiate the prophets. There are examples of Newspeak throughout the "No-wise" and other articles and videos.

Fortunately, in the age of the Internet, Newspeak can be exposed. I've only given a few examples here. With a little training in Newspeak awareness, every LDS can learn to spot Newspeak.

Eventually M2C will be exposed for what it is, and then we can all reach "unity and cooperation" by accepting the teachings of the prophets.
_____

*In 1984, recdep is the Records Department where Winston Smith works. This is a division of the Ministry of Truth that "rectifies" records.]
Posted by jonathan3d at 6:28 AM