Hope of Israel, but they don't have a chance to learn the truth 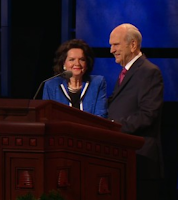 For billions of people around the world, the Book of Mormon doesn't exist. They've never heard of it. But eventually they will, as missionary work moves forward.

Worse, even within the Church today, the Book of Mormon is under challenge.

The youth of the Church--the Hope of Israel to whom President Nelson spoke on June 3--don't even have a chance to learn the truth about the Book of Mormon.

Thanks to the efforts of BYU/CES, the youth of the Church are being taught that the Book of Mormon took place in a mythical, unreal place that cannot be identified in the real world, but it looks a lot like Mesoamerica.

Worse, this teaching contradicts the teachings of the prophets. When the youth discover this, it causes them to be confused and disturbed in their faith. For many, the resulting cognitive dissonance causes them to leave the Church, before or after serving missions.

The record is clear: the prophets have consistently and persistently taught two things about the historicity of the Book of Mormon:

However, these teachings of the prophets are being systematically repudiated by employees at BYU/CES/COB.

-The Church History Department is scrubbing the teachings of the prophets from our history.
-The Church Correlation Department is claiming the prophets have not taught what they have taught.
-The visitors centers are teaching millions of people that the prophets were wrong about the New York Cumorah.
-Apologist groups such as FairMormon* are sowing confusion and doubt, enabling the critics of the Church to succeed in attacking the faith of the youth.

They are being taught that Joseph Smith, Oliver Cowdery, and other Church leaders were ignorant speculators who misled the Church about the New York Cumorah.

There is no greater impediment to the gathering of Israel than the Fifth Columnists within the Church who are teaching that the prophets are wrong about the New York Cumorah, because this teaching undermines faith in the prophets and in the Book of Mormon itself.

If and when all members of the Church are united in accepting the teachings of the prophets on this one point, faith and testimony will grow and the work of gathering Israel will move forward as it should.
_____

D&C 123: 11 And also it is an imperative duty that we owe to all the rising generation, and to all the pure in heart—

12 For there are many yet on the earth among all sects, parties, and denominations, who are blinded by the subtle craftiness of men, whereby they lie in wait to deceive, and who are only kept from the truth because they know not where to find it—
_____

Notice how Joseph wrote "among all... denominations." He did not exclude members of the Church of Jesus Christ of Latter-day Saints.

I think the rising generation in the Church is being "kept from the truth" "because they know not where to find it."

This leaves it up to parents to teach their children the truth.
_____

Well-meaning parents have a serious challenge, however. Faculty at BYU/CES are teaching them the prophets were wrong. Popular books are also misleading the youth of the Church into rejecting the teachings of the prophets.

*For a breath-taking example of disinformation tactics used to promote M2C, go here:
https://www.fairmormon.org/answers/Question:_Where_is_the_Hill_Cumorah%3F
Posted by jonathan3d at 7:10 AM