My June 26 post titled "Jack Welch tells the prophets they are wrong," generated some unintended controversy so I want to clarify it by making two points.

First, I greatly admire and respect Brother Welch. I recognized and praised his contributions in my book Moroni's America and elsewhere. He's awesome and has done immensely important research and writing on many aspects of the Restoration. His work has built and fortified faith.

Second, his influence and credibility is probably the single most important factor for the perpetuation of M2C.

In other words, I think if Brother Welch decided to accept the teachings of the prophets about the New York Cumorah, M2C would vanish. Maybe not immediately, because too many people have too much invested into M2C for them to change their minds, but gradually, and inevitably, members of the Church would unite behind the prophets at least regarding the location of Cumorah.

The New York Cumorah doesn't resolve the rest of the geography issues, of course; the prophets have been just as clear about that as they have been about the location of Cumorah in New York. But clarity and unity about Cumorah is even more important today than it was in 1835 when President Cowdery wrote Letter VII in response to attacks against the historicity of the Book of Mormon.
_____

I like to imagine what it would be like if all our LDS scholars would align themselves with the prophets, at least on the topic of the New York Cumorah.

- They would teach their students that President Oliver Cowdery was reliable and credible instead of attacking him as an ignorant speculator who misled the Church when he wrote Letter VII.

- They would teach their students that Joseph Smith was actually taught by Moroni about Cumorah instead of criticizing him as an ignorant speculator who misled the Church when he endorsed Letter VII and referred to Cumorah in D&C 128:20. 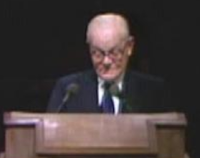 In the western part of the state of New York near Palmyra is a prominent hill known as the “hill Cumorah.” (Morm. 6:6.) On July twenty-fifth of this year, as I stood on the crest of that hill admiring with awe the breathtaking panorama which stretched out before me on every hand, my mind reverted to the events which occurred in that vicinity some twenty-five centuries ago—events which brought to an end the great Jaredite nation....the Nephites, flourished in America between 600 B.C. and A.D. 400. Their civilization came to an end for the same reason, at the same place, and in the same manner as did the Jaredites’.

People often ask me why the LDS intellectuals, as well as the employees at BYU, CES, and COB, continue promoting M2C.

No one knows what others are thinking or what motivates them unless they tell us what they are thinking, the way Brother Sorenson did in the quotation above. But it doesn't really matter why the M2C intellectuals are doing what they are doing.

What matters is that they are teaching the youth in the Church, as well as investigators and long-time members, to disbelieve the prophets.

In some cases, I think they are doing this unintentionally. That is, they simply don't know what the prophets have taught. It continues to astonish me how few members of the Church have ever heard of Letter VII. Few if any mission presidents, stake presidents, temple presidents (or their wives) have ever heard of it. Most are stunned when they find out that President Cowdery identified the New York Cumorah as a fact, and are even more stunned when they find out how ubiquitous Letter VII was during Joseph Smith's lifetime.

This is understandable because the M2C citation cartel has deliberately suppressed Letter VII and the teachings of the prophets, as I've documented many times on this blog and elsewhere.

But there are some M2C intellectuals who know perfectly well what the prophets have taught.

They simply think the prophets are wrong. Then they take it upon themselves to teach this to their students, often by simply not telling the students what the prophets have taught.

It included this graphic:
I don't think the prophets depicted in this graphic as Supreme Court Justices were wrong about Cumorah. Had it been only one or two, and had the New York Cumorah been taught as speculation, fine. That would have left the door open for M2C.

But these prophets taught the New York Cumorah specifically and consistently and persistently over generations, often in General Conference.

President Cowdery, who had actually visited the depository of Nephite records in the New York hill, declared it was a fact that the final battles took place there.

When any latter-day intellectual claims that these prophets were wrong, he/she better be absolutely positive and confident, because no matter who the lawyer is who represents him/her, I don't think the Justices are going to be persuaded.
Posted by jonathan3d at 5:48 AM