Where the evidence takes us

First, many people have asked about the Oliver Cowdery Memorial in Palmyra. I posted photos on the Letter VII blog, here: http://www.lettervii.com/2018/07/oliver-cowdery-memorial-palmyra.html.

Second, we need to address an argument made by the M2C* intellectuals. The argument we consider today is the claim by M2C intellectuals that "we go where the evidence takes us."

First, the M2C intellectuals reject the evidence provided by the prophets. President Cowdery declared it was a fact that the final battles took place in the mile-wide valley west of the hill Cumorah in New York. Joseph Smith embraced this declaration multiple times, as have all the prophets and apostles who have ever addressed the topic, including members of the First Presidency speaking in General Conference.

President Cowdery was an eye-witness to Mormon's depository of Nephite records in the New York Cumorah, as was Joseph Smith and at least some of Joseph's brothers. Eye witness testimony is strong evidence, especially when it comes from someone credible and reliable--someone such as President Cowdery.

It is laughable to watch the current M2C intellectuals declare President Cowdery wrong.

And yet, it is a very serious matter because they are teaching M2C throughout CES and BYU.

Second, instead of going "where the evidence takes them," the M2C intellectuals are selectively choosing evidence that confirms their biases.

It is axiomatic that everyone thinks his/her opinions are correct; otherwise, they would change their opinions. Opinions are manifestations of deep biases, driven largely by upbringing, environment, and peers (and possibly DNA). Everyone seeks to confirm their biases.

The M2C is a textbook example of confirmation bias.

I discussed this somewhat in my short book Mesomania. I'd expand that book with much more detail, but we're only dealing with a dozen or so M2C intellectuals, and they are much too deeply invested in their M2C ideology to change their minds, no matter how many contradictory facts they confront.

After all, these are faithful, dedicated members of the Church who openly repudiate the prophets because of their M2C ideology. It's difficult to imagine a more serious example of confirmation bias.

We are talking about BYU professors who teach their first-year Book of Mormon students that the prophets are wrong about the New York Cumorah.

But their repudiation of the prophetic evidence is not the only problem. 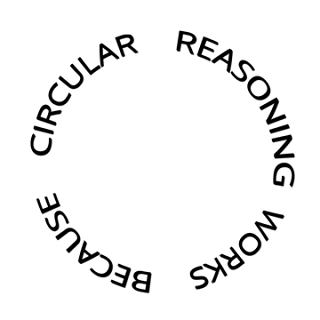 They use circular reasoning to develop the "evidence" that they claim takes them to Mesoamerica.

1. The Book of Mormon events took place in Mesoamerica (because of the anonymous Times and Seasons articles).

3. The Nephites must have experienced volcanoes because they lived in Mesoamerica.

4. Therefore, the destruction in 3 Nephi must have been caused by volcanoes.

5. Mormon just forgot to mention volcanoes, so we, the M2C intellectuals, need to fix his mistake and declare the Book of Mormon describes volcanoes.

6. The existence of volcanoes in Mesoamerica therefore leads us to Mesoamerica as the setting for the Book of Mormon.

You can see how foolish this line of reasoning is. It starts with the premise that the M2C intellectuals want to "prove," so they create these requirements that are satisfied only in Mesoamerica and then claim the evidence "took" them there.

They do this with cement cities, the north-flowing River Sidon, the written language, Mayan banners, Mayan warfare, massive populations, etc.

Literally everything you read about M2C is circular reasoning.

One of the best examples is BYU Professor John Sorenson's massive book, Mormon's Codex. The entire book is absurd once you understand the circular reasoning behind it.
_____

Another way to consider the logical fallacy of the M2C approach is that everyone uses the exact same rationale, but reaches different conclusions.

In all cases, people follow "the evidence" to the place where they wanted it to take them.

No one should be fooled by the M2C intellectuals. They have fooled themselves, but that doesn't mean we should let them continue to fool faithful members of the Church.

_____
*For new readers, M2C is the acronym for the Mesoamerican/two-Cumorahs theory, which is the idea that the hill in New York is not the "real Cumorah" of Mormon 6:6; instead, the "real Cumorah" is in southern Mexico or somewhere else in the world. Of course, this contradicts the consistent and persistent teachings of the prophets, but the M2C intellectuals openly repudiate the prophets so they don't care. Plus, they are teaching M2C at BYU and CES, so if your kids are going to seminary and institute, they are learning M2C.