The other day Book of Mormon Central re-posted No-wise #245 on Facebook.

This is a classic example of confirmation bias. 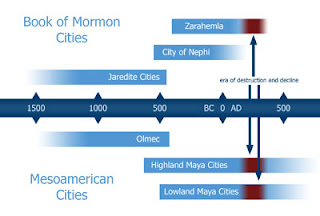 You have to read the No-wise to fully appreciate it.

The history of Mesoamerica also shows the rise and fall of two major cultures during parallel time periods (see chart).1 John E. Clark, a Latter-day Saint and prominent Mesoamerican archaeologist, noted, “The two-civilizations requirement used to be a problem for the Book of Mormon, but it no longer is now that modern archaeology is catching up.”2

The graphic shows the Jaredites vanishing around 400 B.C. That's possible, but the text suggests a later date, more likely around 200-150 B.C.

The Book of Mormon doesn't give us the date of the final battle of the Jaredites, but Limhi's explorers found the Jaredite gold plates around 120 B.C. The blades of the swords were cankered with rust (Mosiah 8:11), but not completely rusted away.

Coriantumr lived with the people of Zarahemla for 9 months, apparently within the living memory of the people who met King Mosiah. King Mosiah translated the stone around 130 B.C.

Plus, of course, the Book of Ether relates the account of Ether's family line, not the entire Jaredite nation. Moroni explained he was writing about the people who were destroyed "in this north country." Moroni later told Joseph Smith that the Book of Mormon was written not far from Joseph's home in Palmyra. These considerations suggest that only a relatively small group of the descendants of Jared and his brother and their friends was involved with the final battle of annihilation at Cumorah in New York. Perhaps the Olmecs were also descendants of Jared and his brother and their friends, but they were not Ether's family line.
_____

Notice the area marked in red, described as "era of destruction and decline." Like most civilizations, the Mayans had periodic warfare throughout their history, but the two major eras were around 200 A.D. and starting in 600 A.D.

These dates don't correspond at all with the Book of Mormon account.

The no-wise recognizes this, but has an awesome rationalization:

The preclassic Maya “experienced peaks and troughs of development, with a mini-collapse about AD 200.”6 While the final Nephite battles are fought in the fourth century AD, the beginnings of their fall are sown ca. AD 200–210, when after reaching the height of prosperity, religious corruption and social stratification again sets in and proves to be divisive (4 Nephi 1:24–29).

The scriptures relate some division in society, but it consisted of religious disputes, not warfare.

Contrary to the Mayan mini-collapse about AD 200, the Nephite society was increasingly wealthy during this time.

Contrary to the no-wise, the Nephites did not reach the height of prosperity before AD 200. In 260 AD, the scriptures tell us that

43 And also the people who were called the people of Nephi began to be proud in their hearts, because of their exceeding riches, and become vain like unto their brethren, the Lamanites.

In 300 AD, the Nephite society continued to be wealthy:

To its credit, the no-wise recognizes that such warfare and collapse is ubiquitous among human societies:

The kingdoms of Israel and Judah, and the great empires that once conquered them—Egypt, Assyria, Babylon, Persia, Macedonia, and Rome—all testify of the same fate. Archaeology and history literally the world over attest to the rise and fall of great civilizations...

"Parallels" to the Book of Mormon are useful for instruction about principles (in this case, the consequences on society of sin).

M2C is pure confirmation bias. You will see the same obvious critical thinking errors in everything published by the M2C citation cartel..

The tragedy is that the bias these M2C intellectuals seek to confirm is their bias that the prophets are wrong about the New York Cumorah.