Saints and the Salt Lake Temple 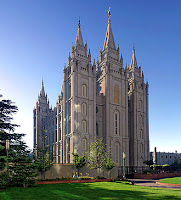 In the October 2018 General Conference, President Russell M. Nelson announced that "plans are now being made to renovate and update the Salt Lake Temple."

This brings to mind the history of the Salt Lake Temple, which is a useful metaphor for understanding the serious problem that the book Saints has brought into public awareness.
_____

When the pioneers first began construction on the Salt Lake temple, they used a sandstone foundation. The foundation was covered up during the Utah War.

They had a choice. They could either try to repair the cracks and hope the other foundation stones didn't crack, or they could start over.

An article in the Deseret News explains:

On Jan. 1, 1862, [Brigham Young] announced that the inadequate foundation would be removed and replaced by one made entirely of granite. The footings would be 16 feet thick. 'I want to see the Temple built in a manner that it will endure through the Millennium,' he later declared.

The work of rebuilding the foundation moved slowly, and the walls did not reach ground level until the end of the construction season in 1867, 14 years after the original cornerstones had been laid.”

We have a serious problem in Church history comparable to the cracked sandstone foundation.

I think the only way to fix the cracked foundation is to tear out the entire sandstone of M2C ideology and rebuild the foundation with the granite of the teachings of the prophets.

The book Saints exposed the problem when the editors intentionally censored the word Cumorah to accommodate modern ideas about Book of Mormon geography.

In their defense, the editors were doing what they thought was right. They, like most Latter-day Saint intellectuals, live inside what I call the M2C bubble; i.e., they have all been trained at BYU and CES to think of the Book of Mormon in a limited geography Mesoamerican setting that requires the "real" Hill Cumorah to be in Southern Mexico. (M2C is the acronym for this Mesoamerican/two-Cumorahs theory.)

In my view, however, the prophets and apostles have been correct all along.

There is plenty of scientific evidence to corroborate the teachings of the prophets, but since when is that the basis for belief?

It was one thing for people to speculate about different ideas. After all, the prophets always taught two things:

1. Cumorah is in New York.
2. We don't know for sure where the other events took place.

The second teaching opened the door for all kinds of speculation. Now we have BYU and CES taking speculation to the ultimate level, going so far as to teach the Book of Mormon using a map of a fantasy world, comparable to Lord of the Rings.

But the first teaching grounded the Book of Mormon in the real world and should have constrained the speculation.

For example, the New York Cumorah is inconsistent with the BYU/CES fantasy maps. Those maps, therefore, teach students that the prophets are wrong.

The New York Cumorah is not inconsistent with a Mesoamerican, Heartland, or any other geography that accepts the teachings of the prophets.

But it is inconsistent with M2C, which explicitly repudiates the teachings of the prophets by claiming that Cumorah cannot be in New York.
_____

This is no small matter. It is a serious crack in the foundation.

People--especially the youth--realize that if the prophets and apostles were wrong about such a basic and oft-repeated teaching as the New York Cumorah, everything is open to question. There have been members of the First Presidency speaking in General Conference who specifically re-affirmed the New York Cumorah, but the M2C intellectuals and their followers are teaching everyone that the prophets and apostles are wrong.

One alternative is to try to fix the cracks by censoring the word Cumorah and hoping no one will notice. That was the intent in Saints, but censorship has only brought more attention to the problem. In the days of the Internet, censorship is a foolish pursuit. Critics already know what's going on, and the worst outcome is for our youth and new members to discover Cumorah first from the critics.

Another alternative is injecting the idea that the prophets were speaking only as men. Maybe, according to this "quick fix," even President Benson was giving his own wrong opinion when he taught that

"The learned may feel the prophet is only inspired when he agrees with them, otherwise the prophet is just giving his opinion—speaking as a man." https://www.lds.org/manual/teachings-of-presidents-of-the-church-ezra-taft-benson/chapter-11-follow-the-living-prophet?lang=eng

I don't think the "opinions of men" quick-fix will endure.

The reason is obvious: it opens the door to repudiating the prophets whenever we disagree with them, just as President Benson pointed out.
_____

To repeat what I wrote at the beginning,

I think the only way to fix the cracked foundation is to tear out the entire M2C ideology and replace it with the granite of the teachings of the prophets.

For more historical background, the wikipedia article is a nice summary:

The location for the temple was first marked by Mormon prophet Brigham Young, the second president of the church, on July 28, 1847, just four days after arriving in the Salt Lake Valley. In 1901 the apostle Anthon H. Lund recorded in his journal that "it is said" that Oliver Cowdery's divining rod was used to locate the temple site.[20] The temple site was dedicated on February 14, 1853 by Heber C. Kimball. Groundbreaking ceremonies were presided over by Young, who laid the cornerstone on April 6 of that year.[21] The architect was Truman O. Angell, and the temple features both Gothic and Romanesque elements.

Sandstone was originally used for the foundation. During the Utah War, the foundation was buried and the lot made to look like a plowed field to prevent unwanted attention from federal troops. After tensions had eased in 1858 and work on the temple resumed, it was discovered that many of the foundation stones had cracked, making them unsuitable for use. Although not all of the sandstone was replaced, the inadequate sandstone was replaced. The walls are quartz monzonite (which has the appearance of granite) from Little Cottonwood Canyon, located twenty miles (32 km) southeast of the temple site. Oxen transported the quarried rock initially, but as the Transcontinental Railroad neared completion in 1869 the remaining stones were carried by rail at a much faster rate.[21]

The capstone—the granite sphere that holds the statue of the Angel Moroni—was laid on April 6, 1892, by means of an electric motor and switch operated by Wilford Woodruff, the church's fourth president, thus completing work on the temple's exterior. The Angel Moroni statue, standing 12.5 feet (3.8 m) tall, was placed on top of the capstone later the same day.[22] At the capstone ceremony it was proposed by Woodruff that the interior of the building be finished within one year, thus allowing the temple to be dedicated forty years to the day of its commencement. John R. Winder was instrumental in overseeing the completion of the interior on schedule; he would serve as a member of the temple presidency until his death in 1910. Woodruff dedicated the temple on April 6, 1893, exactly forty years after the cornerstone was laid.[21]