Many current members of the Church think the Mesoamerican/two-Cumorahs theory (M2C) has been around from the early days of the Church.

Here is one of the clearest explanations of M2C that I'm aware of:

To return especially to the location of the original hill Cumorah: We find no word by angels or by the voice of the Lord that the hill where Joseph found the plates was the historic hill. No revelation in the Book of Doctrine and Covenants so designates it, and nowhere in his history did Joseph Smith write of it as Cumorah. In Times and Seasons volume 3, page 771, he says "stands a hill," and "this hill," and the angel told him to come to "that place" each year. At the final time he says that he went to "the place" where the plates were deposited....

I have no objection to that hill being also called Cumorah, with the understanding that the ancient hill Cumorah is still undiscovered, and that sometime its secrets will be revealed and come to the knowledge of God's people....


For thirty-five years I held the error about Cumorah, until Early Cothell, of Independence, took the blinds off, and then study made all plain to me. But there have been so many controversies that I have hesitated for years about writing on this matter for publication, although urged to do so. But now, because many are dissatisfied with the old theory, I present this article in the interest of truth, that error be removed and the truth be made plain....

Notice especially the emphasis on how "study" made two-Cumorahs plain. This is the M2C orientation; i.e., unless you are trained correctly, you can't understand the Book of Mormon or the teachings of the prophets.

Or perhaps you think this passage comes from the 1980s, when David Palmer, John Sorenson, FARMS, etc., made the M2C theory popular among Latter-day Saints.

In reality, this passage is about 100 years old.

It was written by Elder H. A. Stebbins, of the Reorganized Church of Jesus Christ of Latter-day Saints (RLDS), before he died in 1920.
_____

Today's LDS students and youth know little to nothing about the RLDS. It was a group that rejected the leadership of Brigham Young. They adopted this resolution in 1854:

No. 1. Resolved, That this conference regards the pretensions of Brigham Young, James J. Strang, James C. Brewster, and William Smith and James Wood's joint claim to the leadership of the Church of Jesus Christ of Latter Day Saints as assumptions of power in violation of the law of God, and consequently we disclaim all connection and fellowship with them.

Elder Stebbins served on the committee that compiled these resolutions, which you can see here:
http://www.centerplace.org/library/Study/GCRall.htm
The passage was quoted by L. E. Hills, another RLDS, who published it in a 1924 book titled New Light on American Archaeology. 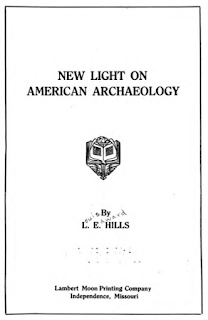 You can read it yourself here:

Notice that after quoting Stebbins, Hill went on to write, "I want later to take up the question of where Moroni was when he made the abridgment of the Jaredite record, and also show that he never left Mexico until he had completed that abridgment and nearly all of his writings."

Of course, this directly contradicts the teachings of every LDS prophet and apostle who has ever formally discussed the hill Cumorah, including members of the First Presidency speaking in General Conference.

The M2C cartel doesn't even want you to know what the prophets and apostles have taught, as we've seen over and over, with the latest example being the Saints book.
_____

This idea of "two Cumorahs" prompted Church Historian and Apostle Joseph Fielding Smith (JFS) to object. He explained that

Because of this [two-Cumorahs] theory some members of the Church have become confused and greatly disturbed in their faith in the Book of Mormon. It is for this reason that evidence is here presented to show that it is not only possible that these places could be located as the Church has held during the past century, but that in very deed such is the case.

A full discussion is here:

For many people, the choice between Hills and JFS is an easy one.

If you're a proponent or follower of M2C, you think Stebbins and Hills were correct.

If you accept the teachings of the LDS prophets and apostles about the New York Cumorah, you think JFS was right.

Regardless of whom you believe, you can find plenty of evidence from archaeology, anthropology, geography and geology to support your belief. You can interpret the text to fit your belief.