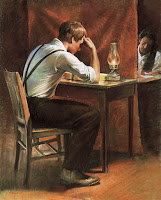 "And he has translated the book, even that part which I have commanded him..." (Doctrine and Covenants 17:6) "Day after day I continued, uninterrupted, to write from his mouth, as he translated with the Urim and Thummim, or, as the Nephites would have said, ‘Interpreters,’ the history or record called ‘The Book of Mormon.’" (Joseph Smith—History, Note, 1)

Many people say the manner of translation doesn't matter because the Book of Mormon is true regardless of how it came to be. That's fine with me. People can believe whatever they want. Most adherents of most religions accept their sacred books on faith, and that's great.

However, the Book of Mormon stands apart from all other books because Joseph presented the text as an actual translation of an ancient record that he obtained by divine intervention, the Book of Mormon is unique evidence of divine origins. The ancient plates came from a resurrected being and Joseph translated the engravings on the plates.

Lately, some faithful scholars have begun teaching that the Book of Mormon was purely a revelation, whether Joseph received it in a vision or through words that appeared on a seer stone he placed in the hat (SITH). In either case, these scholars say, Joseph didn't actually use the plates. The plates were covered with a cloth during the translation--if they were even present in the room.

If that's the case, then the Book of Mormon is on a par with other revealed books. Instead of unique evidence of God's involvement in the world, the text becomes one of many such texts, sacred because of the belief of adherents but not because it is actually a translation of an ancient record.

The translation of the Book of Mormon should be a simple concept. Joseph said he copied the characters (presumably because the engravings were so small) and, by means of the Urim and Thummim, translated them. JS-H 1:62.

One way to think of this: the "interpreters" interpreted the characters, which provided a basic meaning. Joseph then used that interpretation to translate the meaning into coherent English, using his own lexicon (mental language bank) that he had acquired during his lifetime. (I think the Lord prepared him for his role from an early age, as I discussed in A Man that Can Translate and Infinite Goodness.)

Joseph's contemporaries claimed lots of things about the translation. David Whitmer, Emma Smith, Martin Harris, Oliver Cowdery, Lucy Mack Smith, and others offered various explanations over the years. With the possible exception of Oliver, who was authorized to translate, the others necessarily related hearsay regarding the method of translation, so it's no wonder their accounts differ and even contradict one another.

In recent times, historians seem to have forgotten that Joseph translated behind a curtain or screen. He emphasized that "Again, he told me, that when I got those plates of which he had spoken—for the time that they should be obtained was not yet fulfilled—I should not show them to any person; neither the breastplate with the Urim and Thummim; only to those to whom I should be commanded to show them; if I did I should be destroyed." (Joseph Smith—History 1:42)

Joseph wasn't destroyed, which means he kept this commandment, which means he didn't show the artifacts to anyone (except presumably Oliver) until after the translation was complete. That means no one saw Joseph use these items during the translation. Some of them inferred, assumed or speculated about what was behind the screen and then related their opinions as fact.
If there was no screen, then Moroni's commandment to Joseph made no sense. The book Mormonism Unvailed realized this. The whole point of the book was to explain what was behind the "vail" when Joseph was dictating. The book ridiculed the stone-in-the-hat (SITH) explanation (and pointed out that it doesn't matter whether Joseph put a stone or U&T in the hat if he wasn't using the plates) because of the obvious point that if Joseph didn't actually translate the plates, witnesses of the plates would serve no purpose.
It was precisely because Joseph dictated from behind a screen that the Solomon Spalding theory was possible. The Spalding theory persuaded most of the world in the 1800s, which was why Oliver specifically refuted it when he rejoined the Church in 1848 by reaffirming that Joseph translated the plates with the Urim and Thummim.
I wrote, with my own pen, the entire Book of Mormon (save a few pages) as it fell from the lips of the Prophet Joseph, as he translated it by the gift and power of God, by the means of the Urim and Thummim, or as it is called by that book, holy Interpreters. I beheld with my eyes, And handled with my hands, the gold plates from which it was transcribed. I also beheld the Interpreters. That book is true. Sidney Rigdon did not write it. Mr. Spaulding did not write it. I wrote it myself as it fell from the lips of the prophet.
You can see Reuben Miller's journal entry here:
https://catalog.churchofjesuschrist.org/assets/22222322-f4fe-41e3-aa86-bfc54b94df92/0/15

Oliver's testimony is all the more significant because when he spoke, he had in his possession the seer stone Joseph had given him, the one published in the Ensign a few years ago.
He did not hold it up and display it as the means of translation.
Instead, he reaffirmed that Joseph translated the plates with the Urim and Thummim.
That said, we do have accounts of SITH (although Martin, Emma, and David didn't agree on the details). In my view, the best explanation for these accounts is that Joseph gave a demonstration of the translation process using SITH, which was the closest approximation he could come up with without violating the commandment to not show the artifacts. All along, historians have merely assumed that whatever Joseph dictated during the demonstration(s) made it into the Book of Mormon, but we can't know that because no one (other than the scribes) recorded what, exactly, Joseph dictated, and there is no chain of custody of the scribal work during the demonstrations. None of the pages of the Original Manuscript indicate where and when they were written. (In A Man that Can Translate I propose what Joseph dictated during the demonstrations.)