Readers here know that we're happy for people to believe whatever they want. But, as they say, decisions have consequences.

In my view, extrinsic evidence (historical analysis, archaeology, anthropology, etc.) corroborates the traditional teachings of the prophets regarding the origins and historicity of the Book of Mormon. However, in recent decades, those traditional teachings have been largely abandoned by many LDS intellectuals, including some of the most influential intellectuals in the Church.

That is not a criticism of anyone; it's merely a factual observation that anyone can see in the literature. I assume that everyone involved with these topics, whether students, teachers, intellectuals, leaders, members or nonmembers, acts in good faith to the best of their understanding.

This post just considers the impact of changing narratives, not their validity.

By now, most Latter-day Saints know that the growth of the Church has slowed considerably in recent years. There are myriad factors, including declining birth rates, decreased interest in religion generally, as well as doctrinal, historical, cultural, and social conflicts.

Two critical components of the Book of Mormon's authenticity, as taught by the prophets, are

(i) its origin as a translation of ancient records and

(ii) its historicity as an authentic account of actual people in the real world.

Regarding historicity, the New York Cumorah--the only definitive pin in the map taught by the prophets--was well established until an RLDS scholar invented M2C (the Mesoamerican/two-Cumorahs theory) in the early 1900s. Over the objection of LDS leaders, LDS scholars adopted M2C. The New York Cumorah was taught in General Conference in 1975 and 1978, but scholars aggressively promoted M2C in the late 1970s, and because of their positions of influence at BYU, managed to replace the New York Cumorah with M2C in the 1980s, at first among scholars. In the ensuing decades, their influence over BYU and CES students prevailed over the long-held teachings of the prophets.

A similar cycle occurred with respect to the translation of the Book of Mormon. The traditional teaching by Joseph Smith and Oliver Cowdery that Joseph translated the engravings on the plates by means of the Urim and Thummim prevailed among LDS Church leaders until 2007, which was the last time it was taught in General Conference. LDS scholars have largely abandoned the Urim and Thummim in favor of the "stone-in-the-hat" narrative (SITH), which claims Joseph didn't really translate anything but mere dictated, or transcribed, words that appeared on a stone he put in a hat.

We're all open to new information, multiple working hypotheses, etc. I can only relate my own experience and what the data shows.

In my experience, people respond less receptively to the Book of Mormon when told it originated from a stone in the hat (SITH) than when told that Joseph translated engravings on ancient plates. While the U&T is outside ordinary experience, at least it's what Joseph claimed. For people to accept SITH, they have to not only accept an even less plausible explanation (words appearing on a stone in a hat), but they have to also reject what Joseph himself taught. But since SITH has prevailed lately, I assume other people must be having success finding people who readily embrace SITH.

Likewise, in my experience people more readily accept the unambiguous teachings of the prophets about the New York Cumorah than the musings of scholars about an unknown hill in Southern Mexico, but apparently others have different experiences.

And again, I'm fine with people believing whatever they want.

Of course, correlation does not prove causation. There are lots of factors. However, it's worth considering the impact of changing the narratives regarding the origins and historicity of the Book of Mormon. 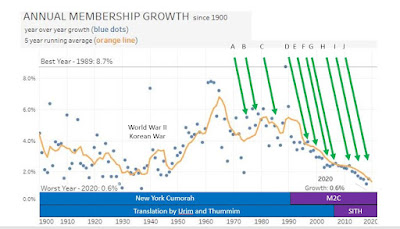 C.      1990 In response to increasing confusion about Cumorah, a letter from office of First Presidency reaffirms NY Cumorah and is widely circulated, but criticized by scholars

2004 This Land: Only One Cumorah teaches NY Cumorah

G.      2007 The last sermon in General Conference to teach the Urim and Thummim

2012 FairMormon agrees with CES Letter re: M2C and SITH

2015 Book of Mormon Central (BMC, a subsidiary of BMAF) organized, begins spending millions of dollars to teach M2C and SITH