D&C 84 and the New Jerusalem

Last week's Come Follow Me lesson focused on D&C 84. Most of the youtube commentators don't tell you how this relates to the Book of Mormon because they all believe in M2C and they can't make sense of why Ether would tell Coriantumr about the New Jerusalem in Missouri if they were both living far away in Mesoamerica.

Of course, people can believe whatever they want. I have no problem with the M2C scholars teaching and believing whatever they want. However, they owe it to their students to explain there are multiple working hypotheses, including one that accepts and corroborates the teachings of the prophets about the New York Cumorah.

Once we accept what the prophets have taught about Cumorah in New York, it's easy to see why Ether told Coriantumr about the New Jerusalem. After the final Jaredite battles ended, Coriantumr went on a journey to see the site Ether told him about, and that's how he encountered the people of Zarahemla. 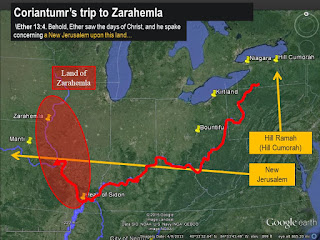 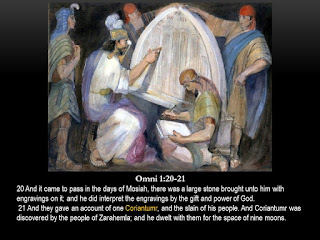 Coriantumr couldn't communicate with the people of Zarahemla, so he carved his history on a large stone. Later, Mosiah translated it. Very simple and clear, as well as consistent with relevant archaeology, anthropology, geography, etc.

The introduction to Section 84 paraphrases the original explanation for this Section, which explains that Joseph had specific questions. Because he didn't say specifically, we assume he asked about questions the returning missionaries had posed. "The elders began to return from their Missions to the eastern states, and present the histories of their several stewardships in the Lord’s vineyard; and while together in these seasons of joy, I inquired of the Lord and received the following."

Joseph's first question, given the first verses of the answer, had to do with the location of the New Jerusalem, spoken of in Revelation 3:12 and 21:2. It's an obvious question because the Lord had mentioned the New Jerusalem in previous revelations (D&C 42 and 45). More significantly, the Book of Mormon referred to it in 3 Nephi and Ether, relating that it would be located "in this land," referring to the land where the Savior visited the Nephites.

The Savior told the Nephites, "And behold, this people will I establish in this land, unto the fulfilling of the covenant which I made with your father Jacob; and it shall be a New Jerusalem." (3 Nephi 20:22)

2 Yea, the word of the Lord concerning his church, established in the last days for the restoration of his people, as he has spoken by the mouth of his prophets, and for the gathering of his saints to stand upon Mount Zion, which shall be the city of New Jerusalem.

3 Which city shall be built, beginning at the temple lot, which is appointed by the finger of the Lord, in the western boundaries of the State of Missouri, and dedicated by the hand of Joseph Smith, Jun., and others with whom the Lord was well pleased. (Doctrine and Covenants 84:2–3)

The earliest edition of Section 84 is found in the Joseph Smith Papers, here:

BTW, the term "New Jerusalem" links to this entry in the Joseph Smith Papers:

Notice the comment I bolded in red. The scholars want us to believe the Saints in Joseph's day were so ignorant that they actually believed the American Indians were Lamanites--as if D&C 28, 30, and 32 were also wrong. So far as I know, no one has claimed any modern revelation to repudiate those revelations or Letter VII or any of the other teachings about the New York Cumorah.

It's bizarre how difficult the scholars try to make all of this. The explanation that Joseph and Oliver gave is by far the simplest, clearest, most parsimonious, etc.

New Jerusalem
Summary
The Book of Mormon indicated that, in preparation for Jesus Christ’s second coming, a city should be built on the American continent and called the New Jerusalem.
1
The Book of Mormon further explained that the remnant of the seed of Joseph (understood to be the American Indians in JS’s day) would gather to this city, where Christ would return in connection with his second coming.
2
Several of JS’s early revelations stated that the New Jerusalem, sometimes referred to as Zion or Mount Zion, would also serve as a gathering place for the Saints and that the location for it would be revealed to them.
3
Other revelations prophesied that Enoch and his people would join the New Jerusalem at the time of Christ’s second coming.
4
The New Jerusalem was described as “a land of peace, a city of refuge, a place of safety for the saints of the most high God.”
5
The term New Jerusalem was used synonymously with Zion by the early 1830s.
6
While uncertainty initially existed regarding the location of the New Jerusalem, a July 1831 revelation designated Missouri as the place to build the city of Zion and identified Independence as the center place of Zion.
7
See also “
Zion
.”