Today the Joseph Smith Papers Project announced the release of the published version of the printer's manuscript of the Book of Mormon. This is a wonderful addition.

Here is the official release.

Here's a helpful article, complete with video and photos.

The Church also released an electronic version of a fantastic article by Rich Turley, Robin Jensen, and Mark Ashurst-McGee that won't be published in the Ensign until October. It's available here.

One of the interesting features of the new publication is the inclusion of photos, including some of the seer stone Joseph used during the translation. Here it is: 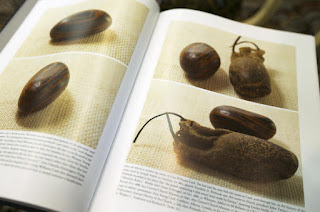 Here's a photo of the stone that appears in the article on lds.org: (NOTE: I cited a previously published version of the printer's manuscript in my book, The Lost City of Zarahemla.)
Posted by jonathan3d at 9:13 PM