Seriously... this is the map you're supposed to accept.

I've shown in over 100 posts so far that the Mesoamerican theory was based on a false premise, that it defies what Joseph Smith and two of the Three Witnesses said, and that it contradicts the text of the Book of Mormon itself.
Here's another example of why.
This is the map from p. 145 of Brant Gardner's book, Traditions of the Fathers. 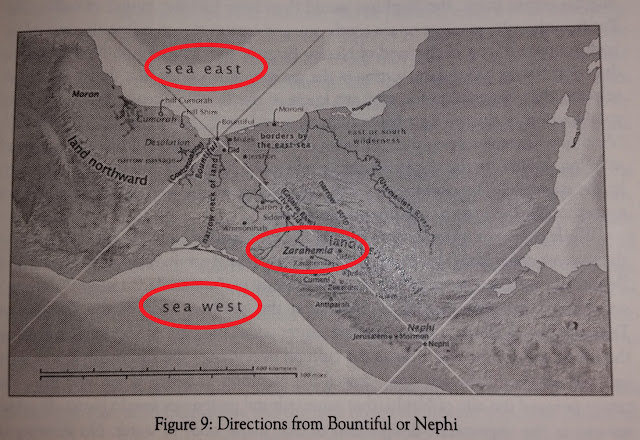 There are far too many problems to discuss them all here, but just look at the seas. Do you see the "sea north" and "sea south" that the text mentions in Helaman 3:8?
No?
It turns out that, according to Gardner and other Mesoamericanists, the sea north and the sea south Helaman mentions are metaphors! You're not supposed to see them because they don't exist in the real world. Gardner adopts John E. Clark's explanation: "The main point is that the reference to north and south seas fits nicely into the Mesoamerican scene as part of a metaphor for the whole earth and was probably used in a metaphorical sense in the Book of Mormon."
I admire the creativity of the Mesoamericanists. As I've always said, these are capable scholars with good intentions. They're good people. They're just trying to defend an indefensible position. I look forward to the day when they apply their talents to North America.
Now, you might wonder why the sea east is north and the sea west is south of the supposedly "narrow" neck of land that is 125 miles wide. The answer is that Joseph Smith didn't understand Mayan mythology so he didn't know how to translate the book correctly. Well, that's not fair. When he translated 1 Nephi, Joseph translated directions accurately because when Nephi lived in the Middle-East, he used the same cardinal directions we do today. But when he came to the New World, Nephi and his successors immediately rejected the Hebrew customs and embraced Mayan mythology and worldview.
At least, that's what you're supposed to believe.
That's what you have to believe if you still believe the Book of Mormon took place in Mesoamerica.
Posted by jonathan3d at 8:38 PM