People are still asking me about the head of Sidon. The Sorenson translation--he always writes "headwaters" instead of "head" when he refers to this--seems to have replaced Joseph Smith's translation in the minds of many.

So okay. Let's set aside the Joseph Smith translation. Let's say, for sake of argument, that the "head of Sidon" is the same as "headwaters of Sidon." Now let's look at how the term was used in Joseph's Smith's day.

"Even “headwaters” does not always mean the source of a river. In 1842, Jesse W. Crosby kept a journal about his missionary journey from Nauvoo to Michigan. “I set off on a northeasterly course towards Michigan, crossing the headwaters of the Illinois at Ottawa, thence up the Knakakee River.” The Illinois River extends another 30 miles east of Ottawa, so what was Crosby referring to? The Fox River joins the Illinois River at Ottawa. To Crosby, “headwaters” meant a confluence."

I used to live along the Fox River in Illinois. It's not a major river, but it is notable and there are several towns along the river (as in most of the Midwest, people settled along the rivers, just as they did in Book of Mormon times).

Here's a map showing the "headwaters" vs. the "source" of the Illinois River. 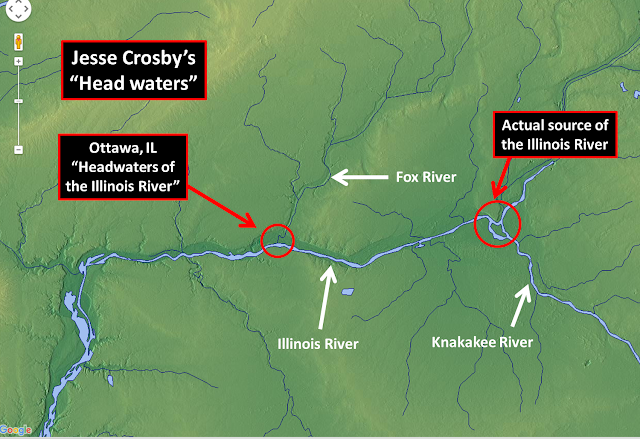 Next, let's see how Oliver Cowdery used the term.

In his Letter VIII, Oliver Cowdery wrote "This gentleman, whose name is Stowel, resided in the town of Bainbridge, on or near the head waters of the Susquehannah river. Some forty miles south, or down the river, in the town of Harmony, Susquehannah county, Pa...." I quoted letter VIII previously here: http://bookofmormonwars.blogspot.com/2015/08/oliver-cowdery-and-stone-box.html 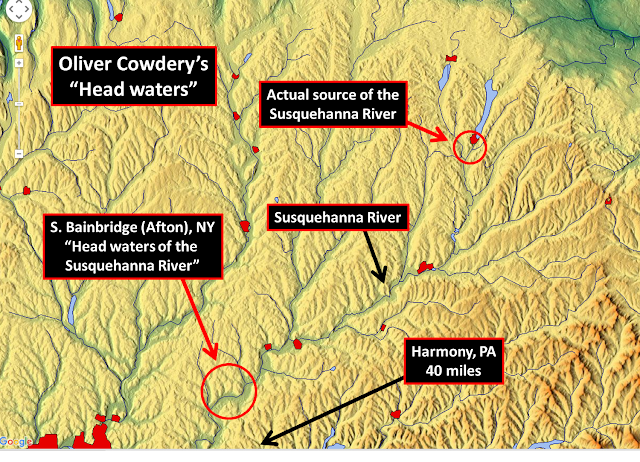 Bainbridge, NY, is at least 40 miles from Cooperstown, the location of the source of the Susquehannah River. (South Bainbridge, today known as Afton, was where Stowell lived, and it is another 5 miles downriver.

Did Oliver not know the source of the river was nowhere near Bainbridge? Of course he did. Then why did he say Stowel resided "on or near" the head waters in Bainbridge?

You can see from the map that tributaries flow into the river at or near Afton. Oliver used the term "head waters" the same way Jesse Crosby did.

Some say "headwaters" may refer to a crossing or bridge. That definition also makes sense in the Book of Mormon. One thing for sure is when Oliver wrote "head waters" he did not mean the source of the river.

These are two actual uses of the term head waters, contemporaneous with Joseph Smith, that don't mean the source. The fact that Oliver Cowdery of all people used the term to mean a confluence should be enough to settle the matter, but I suppose this debate will never be settled until Moroni sets us straight.
Posted by jonathan3d at 1:58 PM