One of the challenges of understanding history is putting ourselves in the mindset of people in history. Today, electricity and motorized vehicles are ubiquitous. Cell phones are nearly ubiquitous. [Okay, I've been a few places in the world where there is no electricity, and no motorized vehicles, and no cell phones, but I reached those places by using all three.]
When we read Church history, what sorts of things were ubiquitous that are no longer so? And what is ubiquitous today that wasn't then?
u·biq·ui·tous
yo͞oˈbikwədəs/
adjective
[Google definition]

Because this blog focuses on Book of Mormon geography/historicity issues, it occurred to me that while Letter VII was ubiquitous during Joseph Smith's lifetime, it is no longer ubiquitous today.

In fact, hardly any living members of the Church have even heard of it, let alone read it. 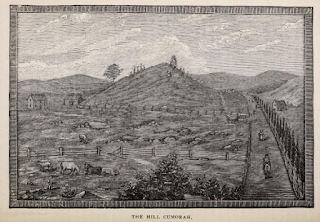 Compare our modern mindset to that of someone living in 1842 Nauvoo, Philadelphia, New York, or England. There and then, we would have sought access to every Mormon publication we could. If we had lived in Kirtland, we would have read the Messenger and Advocate--which originally published Letter VII in 1835. We would be reading the Times and Seasons and the Gospel Reflector, both of which republished Letter VII in 1841. We wouldn't have read Joseph's personal journal, but Letter VII was in there, too. If we lived in England in 1844, we would read the pamphlet that consisted solely of Oliver Cowdery's letters, including Letter VII.

Today, members of the Church who read about the history of the Church don't share that mindset. Instead, they have been taught all their lives about the two-Cumorah theory (although most of them don't realize it).

This is the theory that the Cumorah in New York was only the place where Moroni buried the plates after hauling them from far away (I won't say where because there are a variety of theories that depend on the two-Cumorah theory and I'm not criticizing any of them. I'm just understanding the mindset of people living in the past vs. people living today). The "real Cumorah," where the Nephites and Jaredites had their final battles, was far, far away (again, you can pick your place, so long as it's not New York).

The two-Cumorah theory is implicit in the Gospel Art in the LDS Medial Library at lds.org here. It is implicit in the Arnold Friberg paintings published in millions of copies of the Book of Mormon. (Although the painting "Mormon Bids Farewell to a Once Great Nation" is generic enough to accommodate New York, the rest of the paintings were set anywhere but New York.)

I mention this so that people who read Church history can put themselves in the place of people living in 1842 Nauvoo, Philadelphia, New York, England, etc.

In other words, for today's members of the Church, the two-Cumorah theory is ubiquitous. To understand the Saints who lived during Joseph Smith's lifetime, we need to understand Letter VII and, at least temporarily, incorporate that into our thinking when we read what people wrote back in 1842.

On the Letter VII blog, I'm discussing the development of LDS thought in this area, starting here.
Posted by jonathan3d at 3:21 PM