A question about LDS scholars 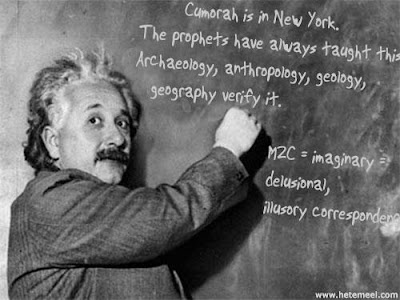 I get a lot of questions about what LDS scholars were thinking as they developed and promoted the Mesoamerican/two-Cumorahs theory (M2C).
I can't answer those questions because I don't know what they were thinking. All I have to go by is what they've published over the years. Besides, I can't speak for anyone else anyway. (I don't think any LDS scholars are reading this blog, but if they are, no offense is intended.)

Every LDS scholar I've met is a nice person, sincere, capable, wanting to do the right thing, etc. I infer from their writing that they have been trying to vindicate what they thought Joseph wrote in the Times and Seasons. But IMO they are in a difficult situation right now. Rather than be critical, we should be empathetic.

I speak from personal experience, having believed and taught the Mesoamerican theory for decades before changing my mind. It's not a simple, overnight process in most cases.

Consider this from your own experience.

If you've believed in a Central American setting for the Book of Mormon your entire life--and how could you not when Church media, LDS scholars, and most instructors tell you this over and over--you might find it difficult to change your mind and embrace the North American setting.

Many--I think most--members of the Church don't realize that the Mesoamerican setting is based on the two-Cumorah theory (Moroni's Cumorah in New York, Mormon's Cumorah somewhere in southern Mexico). Most members have never heard of the two-Cumorah theory and they find it confusing, strange, and unbelievable when they do learn that this is what most LDS scholars think. Just as Joseph Fielding Smith warned.

When you consider the North American setting, you might feel like you're rejecting something important, when in reality, the Church has no official position on the geography question. Soon you realize you are rejecting merely artists' concepts and academic theories that contradict early Church leaders anyway. You're rejecting the confusing two-Cumorah theory in favor of the unambiguous one-Cumorah in New York.

If it's difficult for you, imagine how difficult it is for those who have promoted these theories for so long. For a lifetime, in many cases.

It's the problem of cognitive dissonance. (A good definition is here.)

There are three situations that produce cognitive dissonance, which is the mental stress or discomfort people feel when:

LDS scholars who promote the Mesoamerican theory have created an identity for themselves based on that theory. (At the risk of overgeneralizing, I've listed some of the common claims we read in the publications at the end of this post.)

When information comes along that contradicts their theory, how can they respond?

They have two choices.

1. They can change their self-images and admit they were wrong about the geography.

So far, they have chosen option #2. This is completely understandable, of course. Expected, even.

To protect their self-images as experts in this field, they have been forced to create pretzel-like explanations of their reality. I've documented dozens of examples in this blog already. Consider the rationalizations for rejecting Letter VII, the imaginary interpretations of the text (seeing volcanoes and pyramids where none exist), and the efforts to preserve long-held traditions about Church history.

One of my philosophies is that eventually, the right thing happens. It will in this case, as well, even if it takes longer than we'd like.

I encourage people to read as much scholarly material as possible. Go ahead and read Book of Mormon Central, which is republishing all the old Mesoamerican material and repurposing it as KnoWhys. Or go to FairMormon, Maxwell Institute, etc. It becomes evident, very soon, how convoluted the rationalizations are.

But you have to prioritize, and if you have limited time, the single best discussion of Book of Mormon geography is the text itself, followed by Letter VII, which tells us exactly where the Hill Cumorah is. With that pin in the map, you can figure out the rest.

It's actually very simple and clear.

If you want my ideas on it, you can read my blogs and web pages, or my books on Moroni's America, either the full or the pocket edition. If you want to read more about Letter VII, you can read my little book on it. There are lots of resources on the Book of Mormon Evidence page, too.

Whatever you do, don't depend on what some scholar tells you to think.

Okay, now you're wondering why I created the blogs, web pages, and books if I'm not telling people what to think.

I don't believe in telling people what to think. Instead, my goal is to give people the information they need to think for themselves.

For example, I have a fairly detailed chart showing what people agree about and what they agree-to-disagree about, here.

The problem in the past has been that you can't find alternative perspectives in the works of LDS scholars. You can't find references to Letter VII, for example. (You can't even find it on lds.org). To their credit, Book of Mormon Central has at least published the first edition of my Letter VII book. As far as I know, it's the first and only reference to Oliver Cowdery's letter you can find on traditional LDS scholarly sites.

But that is changing.

More and more people are talking about the North American setting, whether it is referred to as the Heartland, Moroni's America, This Land, or other terminology.

Someday, I think LDS scholars will come to accept the North American setting. But don't hold your breath, and in the meantime, learn as much as you can and decide for yourself.

Common claims of LDS scholars who write about Book of Mormon geography:

1. They are experts in their fields.
2. They think Joseph Smith didn't know much about Book of Mormon geography (some think he didn't know much about the Book of Mormon itself), and they think Oliver Cowdery knew even less (and was wrong about Cumorah in New York).
3. They think Joseph relied on scholars to figure out the geography.
4. They think they have figured out the geography by building on the RLDS concept of a limited geography in Central America and by developing a two-Cumorah theory that relegates the New York hill to a place where Moroni carried the plates and other artifacts 3400 miles from Mesoamerica.
5. They think their theory is supported by archaeology, geology, etc.
6. They think similarities between Mayan culture and their interpretation of Nephite culture constitute correspondences that support their theory.
7. They think the Book of Mormon is not translated correctly because it doesn't contain the Mesoamerican references it should; e.g., the named animals are substitutes for Central American species. Joseph's translation is evidence of what he translated, but not of what was actually on the plates.
8. They think the North American setting is not supported by the text, by the teachings of Joseph and Oliver, or by the archaeology, anthropology, geology, geography, etc.
9. They think evidence from Church history that supports the North American setting is unreliable, visionary, and false.
Posted by jonathan3d at 7:30 AM