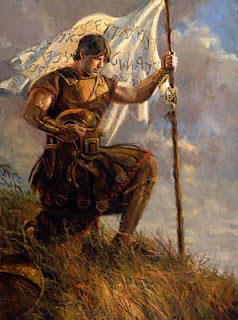 The saga of Captain Moroni and the Title of Liberty is far more meaningful when we consider it taking place in the latter-day land of liberty.

Alma 46:12 explains that "he rent his coat; and he took a piece thereof, and wrote upon it—In memory of our God, our religion, and freedom, and our peace, our wives, and our children—and he fastened it upon the end of a pole.


13 And he fastened on his head-plate, and his breastplate, and his shields, and girded on his armor about his loins; and he took the pole, which had on the end thereof his rent coat, (and he called it the title of liberty) and he bowed himself to the earth, and he prayed mightily unto his God for the blessings of liberty to rest upon his brethren, so long as there should a band of Christians remain to possess the land—"
_____

Certain LDS intellectuals don't think the Book of Mormon took place in North America because they think such an idea stems from nationalism.

They want believers in the Book of Mormon to think Captain Moroni was operating in the jungles of Central America, or in the imaginary lands currently being taught by the abstract maps at BYU/CES. According to the intellectuals who teach M2C, anyone who believes Cumorah is in New York is a nationalist.

Even if they live in another country.

And yet, most if not all of these intellectuals choose to live in the U.S.
_____

This 4th of July, think about the liberties you enjoy wherever you live in the world. Then remember what the Lord said about the U.S. Constitution:

80 And for this purpose have I established the Constitution of this land, by the hands of wise men whom I raised up unto this very purpose, and redeemed the land by the shedding of blood.
Doctrine and Covenants 101:80
https://www.lds.org/scriptures/dc-testament/dc/101?lang=eng&verse=80#p80