The implausibility of M2C in real life

Some, perhaps most, of this could be attributed to the migration of Mexican LDS to America.

But think about that a moment. 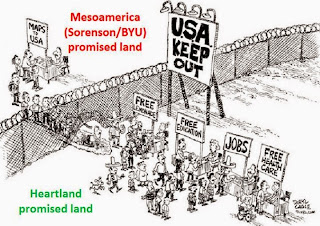 Are they migrating to or from the choice land of the Jaredites, the promised land of the Nephites, the "mighty nation among the Gentiles" foretold by Nephi in 1 Nephi 22:7?
_____

We love the people who live in Central America, including Mesoamerica. Among them are wonderful, faithful Saints. We wish they could be more prosperous and free. Many of us donate time and money to help them, but when we travel there, we see how difficult life is and how deep the problems are.

Now think about M2C (the Mesoamerican/two-Cumorahs theory) from their perspective.

They see generations of young Mormon missionaries from the United States come to their countries to share the gospel. Because they have been taught M2C, these missionaries tell the people that they live in the promised land of the Nephites, the choice land of the Jaredites, etc.

But what do the missionaries do when their missions are completed?

They return to the U.S., most of them never to return to what they taught was the promised land, the choice land.

The Saints (and investigators) in Central America observe this. They know the United States offers the blessings of liberty and prosperity described in the Book of Mormon, while their own countries, thanks largely to the corruption of their governments and the criminal organizations that prevail, do not.

Even the M2C intellectuals who promote Mesoamerica as the promised and choice land of the Nephites and Jaredites choose instead to live in the United States.
_____

When missionaries teach something that contradicts the obvious facts, how does that build faith? 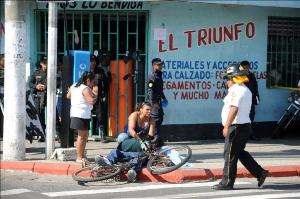 Imagine you live in Guatemala. Your home is protected by bars on the windows. You don't go out at night. If you have a business, you are likely to be robbed at gunpoint in broad daylight.

Like everyone you know, you are Catholic or Evangelical, and your faith makes life bearable despite the political and economic conditions. Many of your relatives have escaped to the United States, legally or not. You have thought about it, maybe even made plans, but it seems dangerous and difficult and expensive.

Then Mormon missionaries from the United States knock on your door. They give you a Book of Mormon and tell you that you live in the promise land of the Nephites. You live in the choice land, choice above all other lands.

You sit there, wondering if these rich Americans actually believe what they are saying.

Maybe you join the Church anyway, because the power of the Holy Ghost tells you the Book of Mormon is true even if you don't believe what the missionaries tell you about the promised land. Or maybe you like the idea that you live in the promised land and you ignore the cognitive dissonance that the idea generates.

Here's something to consider. Sacrament meeting attendance for the Central American region was around 117,000 in March of 2015. This includes all of Costa Rica, El Salvador, Guatemala, Honduras, Nicaragua, and Panama. According to http://cumorah.com/index.php, these countries reported a combined total of about 743,000 members in 2015. This suggests an activity rate of about 16%, which is consistent with other statistics I've seen from that area (as well as my own anecdotal experiences).

None of this diminishes the wonderful vitality of faithful members of the Church in those areas. Zion is where the pure in heart are, and every land is a gathering point for the people who live there. The stakes of Zion are a refuge no matter where they are located.

But maybe if the American missionaries stopped teaching the people in Central America that they lived in the promised land of the Book of Mormon, investigators (and members) would find their message more credible.
_____

People from all over the world seek to come to the United States because it remains the mighty nation among the Gentiles that offers liberty and freedom and opportunity and prosperity, thanks to the Constitution that was established by God.

This may sound nationalistic to some, but these are facts within everyone's knowledge and experience.

It's time to get real.

I think the M2C intellectuals are condescending to the people of Mesoamerica. To satisfy their selfish intellectual needs, they teach their students an inexcusable falsehood that nobody living in the real world actually believes.

I've even seen examples of M2C intellectuals claiming that the New York Cumorah is an attempt to steal the heritage of the Saints in Central America.

But none of that means the Book of Mormon events took place in Latin America.
Posted by jonathan3d at 7:05 AM