Let's get one thing right and then work on the next one.

Let's start with the New York Cumorah because it is about to become a more serious issue than ever before, thanks to the M2C editorial position of the ScripturePlus app brought to us by Book of Mormon Central.
_____

Many years ago. Joseph Fielding Smith warned that the idea of "two Cumorahs" would cause members of the Church to become confused and disturbed in their faith in the Book of Mormon. The fulfillment of that warning is all around us.

These intellectuals don't like it when I point out they are explicitly repudiating the teachings of the prophets, but rather than deal with the facts, they want their followers to remain ignorant of the facts.

Lately, some M2C intellectuals have been on social media claiming I'm lying and slandering people when I discuss the history of M2C. Of course, they never provide specifics. Some time ago, a well-known former Temple and Mission President sent an email to his friends claiming I was lying. (Fortunately, a couple of his friends were also my friends and forwarded the email to me.)

We are each entitled to make up our own minds about these issues. I'm not trying to persuade anyone here; I'm just discussing facts and explaining how I interpret them. We are all free to believe whatever we want. I just think it's important for people to make informed decisions.

The problem of censoring (or de-correlating) information is two-fold.

1. Our M2C intellectuals don't want people to be informed; they want people to take their word for it because of their credentials and positions of influence.

On one hand, it's true for most people that facts don't matter; bias confirmation is strong enough that most of us will filter out facts that contradict our biases and accept only facts that confirm our biases.

But on the other hand, many of us want to know the truth and we'll consider all relevant facts. In my view, the facts support the teachings of the prophets, starting with Joseph Smith and Oliver Cowdery.
_____

I've spelled out the facts before but there are a lot of new readers, so I'll summarize again.

Church leaders, starting with Joseph Smith and Oliver Cowdery, have consistently and persistently taught that the Hill Cumorah of Mormon 6:6 was the same hill from which Joseph obtained the plates. You can read about it in Letter VII (http://www.lettervii.com/), which was republished multiple times during Joseph's lifetime, including by his two brothers Don Carlos Smith and William Smith. Joseph also had it copied into his own journal as part of his life history, where you can still read it in the Joseph Smith papers.

The New York Cumorah has been taught by members of the First Presidency speaking in General Conference, by other Apostles, and by books published by the Church including Talmage's Articles of Faith and LeGrand Richards' A Marvelous Work and a Wonder.

Beginning in the 1980s, the New York Cumorah was de-correlated.

Certain M2C scholars began teaching that every prophet and apostle who taught the New York Cumorah was wrong. They still claim the prophets and apostles were merely expressing their opinions and thereby misled the Church.

One of the most prominent examples is Mormon's Codex, which the Foreword describes as the high-water mark for Book of Mormon studies. The book includes M2C material dating back to the 1980s. In the book, the author wrote this about the teachings of the prophets:

You can ask any M2C believer and he/she will tell you he/she agrees with Brother Sorenson. They might say something such as "I think he could have said this better," or "I wouldn't have said 'manifestly absurd,' but the prophets were clearly wrong."

No matter how they frame this, they are directly and openly repudiating the prophets every time they teach M2C.

I've discussed how the New York Cumorah was de-correlated (meaning censored) from the Saints book, which the Church historians admitted. https://saintsreview.blogspot.com/2018/10/the-historians-explain-censorship-in.html

I've discussed other examples, but some readers want evidence of specific de-correlation. 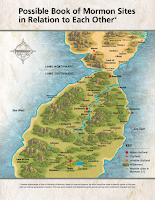 Scroll down and you'll see the map in the materials.

Look for Cumorah in the "land northward" above the "narrow neck of land." It is just to the left of "Ablom." 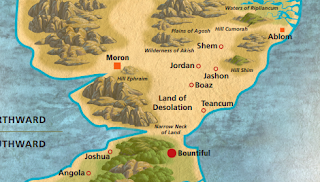 You don't need to know much about geography to know this is not a map of western New York.

This map is a direct, open repudiation of the teachings of the prophets. It teaches that the "real" Cumorah is not in New York; i.e., that there are "two Cumorahs." According to this map, the prophets and apostles who have taught that Cumorah was in New York were wrong.

As this map depicts, the New York Cumorah has been completely de-correlated from Church media, curriculum, visitors centers, etc.

Instead, the New York Cumorah has been replaced with M2C, as this Seminary map illustrates. It's basically Mesoamerica turned 90 degrees clockwise.

A fun component of the map is the caption at the bottom: "*Possible relationships of sites in the Book of Mormon, based on internal evidence. No effort should be made to identify points on this map
with any existing geographical location. The map spans Jaredite and Nephite/Lamanite periods during which settlements changed over time."

Second, "No effort should be made to identify points on this map with any existing geographical location" is a direct repudiation of the teachings of every prophet and apostle who has specifically identified the location of the Hill Cumorah in New York.

Third, the warning against comparing to "any existing geographical location" is an admission that the M2C interpretation doesn't fit anywhere in the real world, which naturally leads to the conclusion that the text is fiction. This is a major cause of the "faith crisis" that so many people talk about.

Millions of Latter-day Saints have been taught this map (and others like it such as the BYU fantasy map) over the last several years. As such, it has become the de facto interpretation of the text. Thanks to this M2C-accommodating curriculum, many if not most members of the Church cannot "unsee" the hourglass shaped geography of the Book of Mormon.
_____

Some people claim the curriculum, media and visitors centers are "neutral." We've discussed that before. http://www.bookofmormoncentralamerica.com/2018/11/non-neutral-in-gospel-topics.html


Any hint of "neutrality" has been entirely destroyed anyway by the actions of the Church-supported M2C organizations such as Book of Mormon Central. The new "scriptureplus" app explicitly teaches that the "real" Cumorah of Mormon 6:6 is in Mesoamerica. Book of Mormon Central is spending millions of dollars to spread its M2C message, using attractive videos and graphics, as well as links to its own M2C "Kno-Whys" and other resources.

There's an easy solution to at least this one problem: re-correlating the New York Cumorah.

To reaffirm the New York Cumorah and all the prophets and apostles who unequivocally taught it for 150 years would go a long way to restoring faith in the teachings of the prophets and apostles. It would reverse the impact of M2C, which, as Joseph Fielding Smith warned long ago, causes members to become confused and disturbed in their faith in the Book of Mormon.
_____

As I wrote at the outset, we are each entitled to make up our own minds about these issues. I'm not trying to persuade anyone here; I'm just explaining how I see the facts. You are free to believe whatever you want. I just want people to make informed decisions.

I've found that most Latter-day Saints, once they know what the prophets have taught, side with the prophets vs the intellectuals.

That's why de-correlating the New York Cumorah has been such a mistake, and why re-correlating Cumorah would be a simple step towards eliminating a major source of confusion in the Church.