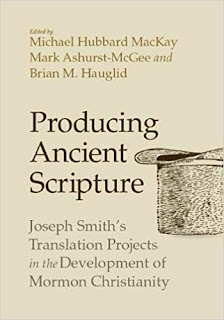 Finally, FairMormon did an interview with the editors that is a good summary of the book.

https://www.fairmormon.org/blog/2020/07/24/qa-with-editors-of-producing-ancient-scripture-joseph-smiths-translation-projects-in-the-development-of-mormon-christianity?utm_source=feedburner&utm_medium=feed&utm_campaign=Feed%3A+fairldsblog+%28FAIR+Blog%29
Posted by jonathan3d at 7:30 AM