Chiasmus and Visions in a Seer Stone

Preliminary note: I posted some comments on a debate over the Producing Ancient Scripture book here:

Readers here know that I think SITH is as much of a disaster as M2C is. Of course, others disagree.

My critics seem oblivious to the fact that I could easily make an argument in favor of SITH and M2C. One can always find information to confirm one's bias. It's easy to contour an argument to fit the evidence one chooses to accept. The proponents of SITH and M2C, as well as JDT (Joseph didn't translate) and MUST (the mysterious unknown supernatural translator) are all smart, faithful people who have their reasoning and evidence to support it.

The question is how to decide which bias is worth confirming.

In my case, I see so many downsides to SITH, M2C, JDT, and MUST that I choose not to confirm those biases.

There has been a burst of interest in chiasmus again.

BYU Studies has a web page dedicated to chiasmus.

This is all great. We can gain useful insights by looking at chiasmus and other parallel structures in the text.

True, there are critics of the concept. They focus on examples of chiasmus that are contrived or stretched, often by omitting parts of the text to make the rest "fit" into a chiastic structure. That debate, as do most debates, usually leaves both sides where they started; i.e., both sides confirm their bias and are convinced the other side is "wrong" in some way.

And that's fine. That's how our minds work. We can all believe whatever we want.

There is a separate problem, though. As awesome as chiasmus is, our scholars are ruining it by directly linking chiasmus to SITH. Here's an example from Book of Mormon Central (BMC):

Kno-why #334 considers some of the early literature about chiasmus in the Bible and explains that these references were not available to Joseph Smith in 1829. It's a good point, assuming Joseph translated the Nephite plates, as he and Oliver said he did. That would mean the Nephite authors (Mormon, Moroni, Nephi and Jacob, primarily) used chiasmus to some degree.

But as long as our LDS scholars are teaching that Joseph didn't really translate anything, that he merely read words that appeared in a seer stone or vision, it opens the door to alternative theories such as that presented in the book Visions in a Seer Stone.

Look at the illustration of SITH that accompanies Kno-why #334. This is rapidly becoming the standard narrative in the Church. In this case, the plates aren't even in proximity. In other illustrations, the plates sit on the table under a cloth.

Many LDS scholars today teach that Joseph didn't use the plates. They say Joseph didn't even use the Urim and Thummim, but instead just put his seer stone in a hat and read words that appeared.

In the SITH context, evidence of chiasmus supports the claims of those who say Joseph composed the text.
_____

Visions in a Seer Stone claims that Joseph Smith used mnemonic devices to help him "perform" the Book of Mormon as he dictated it. Here's an excerpt:

Laying Down Heads and Skeleton Outlines

Smith’s method of using a preliminary outline, or, as more commonly termed, a “skeleton” of “heads” (an outline formed with key summarizing phrases) to organize and arrange his 1832 historical narrative, was a standard technique of composition in the early nineteenth century. The explicit use of the skeletal sketch in the opening of the history, marking each stage in the sequence of the narrative with a summarizing phrase, provides one of several expressions of the method commonly known as “laying down heads.”

Both speakers and writers used this popular, widespread technique to designate and arrange the main topics of such compositions as sermons, public speeches, essays, narrations, and school lessons. In terms of application, this approach was quite simple and involved two basic steps: first, the speaker or author created a skeletal outline of his or her intended composition by using a sequence of key phrases (“heads”) that concisely summarized each of the main topics, issues, or divisions of an idea contained within the overall passage that followed. Second, using this skeletal outline as a reference guide, the speaker or author would then elaborate on each key phrase, expanding it into a fully developed passage of oral address or text. Smith’s familiarity with this technique comes as no surprise, given the ubiquity of this organizational and mnemonic approach in the early nineteenth century. Visions in a Seer Stone (p. 16).

Chiasmus is also a mnemonic device.

I was a little surprised, actually, that Davis didn't include a chapter on chiasmus. It would have strengthened his case that Joseph memorized the key parts of the Book of Mormon, used mnemonic devices to keep the story straight, and improvised the rest.

Here's how chiasmus works. To keep the reference simple, here's a wikipedia entry:

Oral literature is especially rich in chiastic structure, possibly as an aid to memorization and oral performance. In his study of Homer's Iliad and Odyssey, Cedric Whitman, for instance, finds chiastic patterns "of the most amazing virtuosity" that simultaneously performed both aesthetic and mnemonic functions, permitting the oral poet easily to recall the basic structure of the composition during performances.[6] Steve Reece has demonstrated several ambitious ring compositions in Homer's Odyssey and compared their aesthetic and mnemonic functions with examples of demonstrably oral Serbo-Croatian epic.

Here's an insightful explanation of how chiasmus aids the memory in story telling. 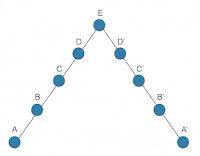 The article points out that if you rotate a chiasmus 90 degrees, you get the conventional plot structure familiar to anyone who has watched a movie.

That's what makes it such an effective aid to memory.

In my view, of course, Joseph Smith actually translated the plates, using his own language, drawn from his mental language bank. In that scenario, the structure in the text, including any chiasmus, was from the plates.

Once we insist that Joseph did not actually translate anything (or we redefine the term translate to mean anything other than the mental process of expressing one language in another language), chiasmus is more problematic.

Scholars say Joseph expressed words provided by the MUST that he saw in vision or on the stone, but that is indistinguishable from Davis' theory that he recited the text from a combination of memory clues and improvisation. The evidence would confirm both biases equally.

Not so with the bias that Joseph actually translated the characters, as he said he did.

Here's another quotation from Visions in a Seer Stone that explain the thesis. You can see how easily chiasmus as a mnemonic device bolsters Davis' theory.

Jacob’s use of only two main heads to summarize his entire sermon offers another clue about Smith’s training and exposure to contemporary sermon culture. By reducing the opening outline of Jacob’s sermon to two brief heads, which nevertheless offered enough information to trigger his memory and guide the speech, Smith provided himself with two succinct mnemonic cues that could encapsulate the entire oration. Visions in a Seer Stone (p. 96)
_____

In my view, accepting the plain words Joseph and Oliver left us is the optimum bias.

When we accept the teachings of the scholars instead, no matter how sophisticated those teachings are, we're going to discover we are undermining faith in what Joseph and Oliver taught. The credentialed class may be more adept at confirming their biases than those of less sophistication, but the "weak and simple" are the ones the Lord said would proclaim the gospel to the ends of the world. (D&C 1:23).
Posted by jonathan3d at 10:49 AM