Most Latter-day Saints accept the Church's position of neutrality regarding Book of Mormon geography, which recognizes multiple working hypotheses. We think that position best promotes harmony and unity in the Church.

To make informed decisions, we encourage people to become "engaged learners" as they study the scriptures, the teachings of the prophets, authentic Church history, and relevant extrinsic evidence including anthropology, archaeology, etc.

We accept the teachings of the prophets that the hill Cumorah of Mormon 6:6 is in New York. That is one working hypothesis. We recognize that teaching does not determine the locations of any other Book of Mormon events. The New York Cumorah accommodates theories ranging from a limited area around New York to the entire hemisphere and everywhere in between. We think extrinsic evidence supports the New York Cumorah and improves our understanding of the text.

But again, that is only one working hypothesis.

Other Latter-day Saints insist that the only possible setting for the Book of Mormon is in Mesoamerica. They teach that the prophets were wrong about the New York Cumorah because they have decided that the "real Cumorah" of Mormon 6:6 is in Mexico. This is the Mesoamerican/two-Cumorahs theory (M2C).

We recognize M2C as a working hypothesis and we are fine with people believing M2C if they want to. We hope they are engaged learners and not merely lazy learners whose beliefs are assigned to them by scholars.

M2C believers understand and accept the M2C teaching that the idea of Cumorah in New York was a false tradition that Joseph Smith erroneously adopted, thereby misleading the Church for decades until RLDS scholar L.E. Hills figured out the truth.

The M2C intellectuals formed the M2C citation cartel to aggressively enforce M2C. The biggest promoter of M2C is Book of Mormon Central, which has embedded M2C in its logo. Other members of the citation cartel include the Interpreter, BYU Studies, FAIRLDS, Meridian Magazine, etc.

On this blog, we respect the scholars and their research and we embrace relevant facts they discover, but we don't blindly accept their theories. We're happy for people to believe whatever they want, but we prefer to support the teachings of the prophets about Cumorah and we think the evidence corroborates those teachings.

The M2C citation cartel could bring about greater unity in the Church by changing course to embrace the Church's policy of neutrality, recognizing multiple working hypotheses.

A first step would require Book of Mormon Central to change its logo, which explicitly defies the Church's position of neutrality.

In the meantime, we see this (click to enlarge). 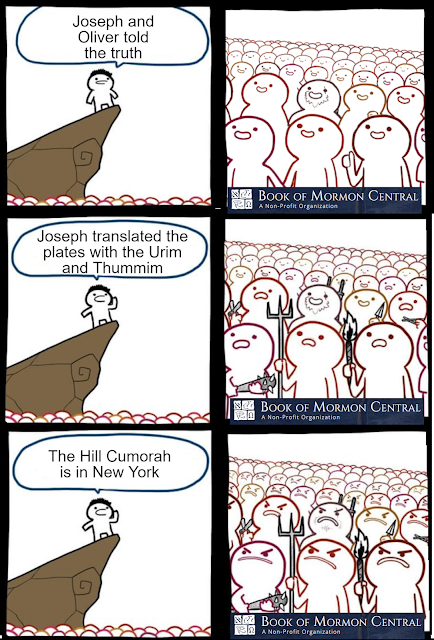