JS letter to OC, Oct 1829, and visiting with M2C/SITH scholars 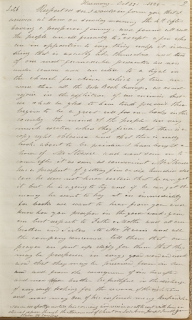 The earliest extant sample of Joseph Smith's writing is a letter he wrote to Oliver Cowdery in October 1829. It includes this wonderful passage:

The passage reminds me of what it is like when I visit with M2C/SITH scholars. [BTW, if you're reading this post on Amazon, moronisamerica.com, or another site, you're missing the additional resources, including explanations of acronyms, on the original blog, here:

We all love our critics, but it's sad to see how they still resist new ideas--especially new faithful ideas. After all, their education was supposed to give them confidence and competence instead of defensiveness and intransigence.

Serious scholars would readily and happily spell out all the facts and then compare multiple working hypotheses. But our M2C/SITH scholars continue to refuse to do that. Within the last month I met with several of them and the answer is still the same: no.

They are obsessed with trying to persuade people to agree with their theories. The last thing they want is for Latter-day Saints to make fully informed decisions.

It's the same with CES Letter, John Dehlin, and other critics. They delude their followers by pretending to seek "the truth" when in reality they share the approach of our M2C/SITH scholars; i.e., they support their personal theories with selective quotations and logical and factual fallacies instead of putting out all the evidence and showing multiple working hypotheses so fully informed people can make good decisions.

Both sides rely on lazy learners who defer to their respective "expertise."

I prefer the approach President Nelson encourages. "Good inspiration is based upon good information."

The October 1829 letter obviously contradicts Emma's famous claim that Joseph couldn't write or dictate a letter (unless he attended an intense writing school during July-Sept 1829 when he was arranging the publication of the Book of Mormon).

The letter also contains considerable non-biblical, non-Book of Mormon terminology and phrasing, another indication of the sources of Joseph's lexicon. I agree with those who still believe Joseph Smith translated the engravings on the plates "after the manner of his language."