Discussions of Book of Mormon historicity/geography and the manner of translation should never rise to the level of contention or disputation. People can believe whatever they want.

What matters most is staying on the covenant path, striving to follow and emulate Christ, and helping to build Zion by serving one another.

We've emphasized this repeatedly on this blog. I'm not trying to persuade anyone of anything, except that I want LDS intellectuals/scholars to stop misinforming Latter-day Saints. Instead, they should encourage people to consider all the facts, consider multiple working hypotheses, and then make informed decisions. On this blog, we trust people to make their own decisions.

I've used this image in my firesides and presentations: 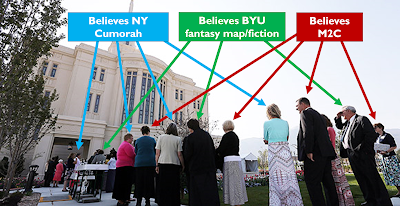 The problem with the M2C citation cartel is that they don't trust Latter-day Saints to make informed decisions. Instead, they tell them what to think. They censor information that contradicts M2C and SITH. They tell them the prophets were wrong, etc. They won't allow their students, readers, donors, and followers to compare alternative working hypotheses.

This is a problem because too many sincere people are confused when they see LDS scholars explicitly repudiating the teachings of the prophets regarding historicity/geography and the translation of the plates.

Some people will accept the M2C and SITH and remain on the covenant path. Some won't accept M2C and SITH, but they will stay on the path by adopting the BYU fantasy map, which teaches that the Book of Mormon is best understood in a fictional setting. Or they will put these issues on their "shelves" and avoid the cognitive dissonance that way. All of these can stay on the covenant path, no problem.

But many who reject M2C and SITH also reject the Restoration. Thanks to the M2C citation cartel, they have been taught that M2C and SITH are the only acceptable interpretations. They abandon the covenant path and reject the Restoration without ever learning there are alternative faithful interpretations that corroborate, instead of repudiate, the teachings of the prophets.

On this blog, we want to give people alternatives to M2C and SITH. We offer information that many people don't know about or haven't considered.

We're confident and happy with the interpretations that corroborate the teachings of the prophets, but we don't mind if others disagree. We just want them to make informed decisions.

Basically, We claim the privilege of worshiping Almighty God according to the dictates of our own conscience, and allow all men the same privilege, let them worship how, where, or what they may.

We just hope that all people, whatever their beliefs, can work together to attain Christ-like lives as they seek to establish a Christ-like society.

We think the optimum way to do that is by following the guidance of the Spirit, however that is manifest according to a person's spiritual gifts and personal situation. (Moroni 10)