Yet another video I forgot to mention - Urim and Thummim

This summer I did an interview with the Restored Gospel Podcast titled "Peepstone or Urim and Thummim? How the Book of Mormon was translated with Jonathan Neville."

The hosts are awesome, well prepared and interesting. During the interview I had to move around a few times, but the continuity is good anyway.

You can watch it here: 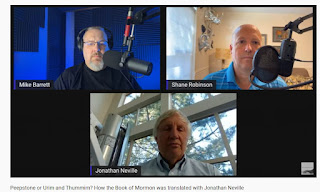 And a longer one here, with some interesting viewer comments:

That video shows a slide of Leviticus 8:7–9

9 And he put the mitre upon his head; also upon the mitre, even upon his forefront, did he put the golden plate, the holy crown; as the Lord commanded Moses.

The theory here is that when you asked God a question that involved more than a yes or no answer that the stones, and i can't help it I'm chuckling here, we used to call this the blinking light theory in bible college. The stones would light up and then the priests would write down the consonants on that stone and again whatever stones lit up those are the ones you'd write down and then you have to figure out what the message is. Okay do you like that? If you like that better than the other two, congratulations.
Again, nobody really knows precisely what the Urim and the Thummim were and how this worked the only real indication you get is First Samuel 14 when they are cast okay so there must have been some sort of casting thing casting act going on there you have it.

Questions about the Urim and Thummim have persisted for centuries. Several commentators have applied the term metaphorically, such as here:

when that of the Apostle shall be obeyed, Let him that speaketh, speak as the Oracles of God , as one that hath Urim and Thummim in his Breast, when they shall not dare to speak but what they are inwardly moved to speak by the Holy Ghost.

In 1743, Gilbert Tennent used the term this way:

4. The high Priest’s bearing the Names of the twelve Tribes on his Breast-Plate, when he appeared before God, seems to represent the affectionate Remembrance our Lord hath of his whole Church, when he intercedes for them with his Father. The Urim and Thummim on the Breast-Plate, signifying Light and Integrity, was doubtless a Figure of the Sufficiency of Christ’s Prophetical Office, to answer all the Difficulties of his People.

It was discussed during a debate about doctrinal issues at Harvard:

It is this Application of—the historical Parts of Scripture when we are reading, that must render them profitable to us; and appeals to the Experiences of the Christian, that if he hath so consulted the Word of God, he has been as plainly directed how to act, as tho’ he had consulted the Urim and the Thummim.

On another occasion, in 1748, Tennent lamented that we have no Urim and Thummim "in this dispensation."

In this Dispensation we have no temporal High-priest, with the Urim and Thummim upon his Breastplate, from whom we may expect immediate and oracular Answers about Things to come; and therefore it is not possible for us, in this State of Things, wholly to follow David’s Example.
Nor have we any Necessity for, or Promise of immediate objective Revelation, in place of the Jewish Urim, in the ordinary Times of the Gospel, from Christ our High-priest, in any Matters whatsoever, whether temporal or spiritual, by Visions, Voices, &c. seeing the Prophecy is sealed, the Canon of Scriptures is compleated, and able to make the Man of God perfect, and thoroughly furnished to every good Work.
It is enough, that we have in place of the Urim a greater Measure of the Influences of the holy Spirit than the pious Jews ordinarily enjoyed, enlightening our Minds in the Use of appointed Means, to the right understanding of the Meaning of the holy Scriptures, and enabling us to believe their divine Authority;
(18c: 1740s; 1748, N04985 / 3. Defensive War Defended,,57¶–59¶)