Another reason why U&T vs SITH matters

Critics continue to refreshen old arguments against the Restoration, such as the claim that Joseph plagiarized outside sources to produce the Book of Mormon and other scriptures/teachings. Their ongoing efforts suggest that they have some success in persuading some Latter-day Saints (and potential Latter-day Saints).
Otherwise, they wouldn't waste their time/money, unless their respective followers continue to support them to confirm their own biases.
_____
The plagiarism claim depends on the assumption that Joseph composed the text.
If Joseph actually translated the text, as he (and Oliver and their successors) claimed, then the plagiarism claims are ridiculous, as we'll see below.
However, if we read the responses to the critics from the citation cartel (FAIRLDS, the Interpreter, BookofMormonCentral), they are not all that persuasive because they agree with the critics that Joseph didn't really translate the plates!
Here's an example from Royal Skousen, who openly teaches that Joseph was not the English-language translator. 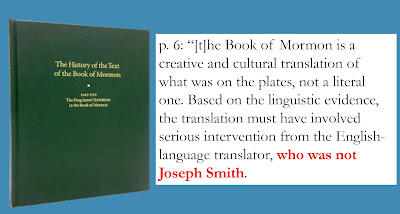 Skousen and his followers teach that an unknown entity translated the Nephite plates, inexplicably relying on Early Modern English, and made the words appear on the stone in the hat (SITH).
My term for this entity is the Mysterious Incognito Supernatural Translator (MIST).
The first obvious problem with the MIST is that people will have different ideas about the identity and motivations of the MIST. Faithful Latter-day Saints who accept SITH believe the MIST is divine. Others who reject the divinity of the Book of Mormon (but also accept SITH) claim the MIST is not divine but a deceiver, or merely the imagination of Joseph Smith.
Another obvious problem with the MIST is why the MIST would have incorporated the material cited by critics as evidence of plagiarism (i.e., composition).
When we realize that SITH constitutes an explicit repudiation of what Joseph and Oliver taught, it's understandable why so many Latter-day Saints are confused.
In my view, Joseph and Oliver taught unequivocally that Joseph translated the plates into English and thereby refuted any claim by critics of plagiarism.
It is baffling why faithful Latter-day Saints would accept and promote SITH, except for one thing: they've been conditioned to repudiate other things Joseph and Oliver taught (such as the New York Cumorah).
_____
Some people say it doesn't matter how Joseph Smith produced the Book of Mormon because they believe it's the word of God regardless. And that's perfectly fine with me.
There are people in every religion who have innate faith. I've met innumerable such people around the world in all religions. Innate faith and belief explains why religions tend to be grouped geographically and along family lines. Many people naturally accept the the religion they inherited from their parents without questioning it.
Nothing wrong with that.
The Restoration is different, though, because it is a call to action for the entire world to abandon their traditions and embrace the restored, everlasting gospel.

And now, verily saith the Lord, that these things might be known among you, O inhabitants of the earth, I have sent forth mine angel flying through the midst of heaven, having the everlasting gospel, who hath appeared unto some and hath committed it unto man, who shall appear unto many that dwell on the earth.
And this gospel shall be preached unto every nation, and kindred, and tongue, and people.
(Doctrine and Covenants 133:36–37)

One of the principal impediments to acceptance of the Restoration is the doubt cast by critics on the credibility of the Book of Mormon and the claims made by Joseph Smith and Oliver Cowdery regarding that book.
Although Joseph and Oliver claimed that Joseph translated the plates, critics insist that Joseph didn't translate anything. Some of them say Joseph composed the text or derived the text from a supernatural source. Hence, SITH.
_____
Let's look at a recent example of critics who claim Joseph plagiarized sources available to him to compose the text that he dictated. The plagiarism claim has been repeated for decades. Recently, Mormon Discussion went through the issue in detail yet again.
https://www.youtube.com/watch?v=AJTxk9W2fxQ
They posted their outline here:
https://www.reddit.com/r/exmormon/comments/y39zfa/plagiarism_in_joseph_smiths_mormonism_mormon/
One of the common sources of plagiarism for college students is Chegg.com. It seems to be a source for Mormon Discussion as well. The bolded terms and phrases in their first sentence (as well as the rest of the post) are obviously plagiarized (using their methodology).
Below is the outline for the video podcast that covers in depth Joseph Smith's Plagiarism of outside sources in order to create the standard works and Mormon Theology.
Below the original is followed by the source of the plagiarism with the link underlined.
Below is the outline
Below is the outline
Video podcast
Video podcast
covers in depth
covers in depth
plagiarism
plagiarism
outside sources
outside sources
in order to create
in order to create
There are thousands of outside sources Mormon Discussion could have used in order to create its video and accompanying outline. Obviously, I can't prove that Mormon Discussion used Chegg for its plagiarism.
But this brief exercise points out the absurdity of the plagiarism claim. The terms/phrases used in this example are common to the point of ubiquitous among English speakers. No one needs to plagiarize anything to employ this terminology because it is part of everyone's lexicon.
The same would be true for Joseph Smith--assuming that he translated the plates, as he claimed. He could hardly have translated the plates using anything other than his own lexicon, albeit guided/inspired in the process.
If Joseph did not translate the plates, however, we are left (thanks to our LDS scholars) to wonder why the MIST, who presumably had infinite knowledge and ability, would have made the word choices highlighted by Mormon Discussion and other critics.
As usual, Joseph's claims are by far the most credible and best supported by extrinsic evidence.
Posted by jonathan3d at 4:58 PM