We've been in France for the last week, attending the open house of the Paris Temple and other things. We did a fireside on Church history and the Book of Mormon Friday night, along with an all-day conference Saturday.

There is a lot of enthusiasm here for both topics. As everywhere else in the Church, we're finding that people never really bought off on the Mesoamerican setting but didn't know there was an alternative. Several told us they could never make sense of the Friberg illustrations in the Book of Mormon, etc.

As are Church members everywhere, the Saints in France have always believed Cumorah was in New York and are glad to know that the North American setting works so well with the text and related sciences. There were people from all around the world visiting the open house, and we're getting more invitations to do presentations in other countries as well as around the U.S. There just isn't enough time to go everywhere people want us to go.

I translated Moroni's America into French, as you can see from the title of the first slide in my presentation. It's available on the French Amazon page. Members who speak French around the world, especially in Europe and Africa, are enthusiastic about having these materials in their own language. 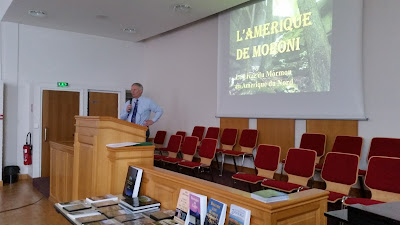 The open house of the Paris Temple has also generated positive media coverage and favorable impressions among government and religious leaders here in France. I don't have time to relate all the stories, but so many people are visiting the temple and so many are touched by the spirit there and the warmth of the members who are helping that the missionaries can't keep up with all the requests for more information.

The ward we attended had the largest congregation in their history. Many were visitors to the temple, of course, but the level of enthusiasm is remarkable. The speakers in Sacrament meeting gave exceptional accounts of spiritual events associated with the temple. In Priesthood meeting, they asked me to discuss family history, including useful apps. 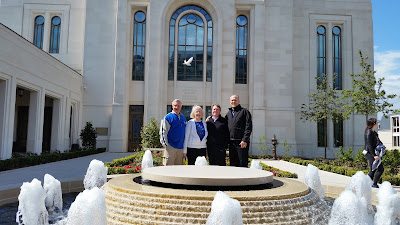 A very interesting sidenote is the translation of the Book of Mormon into French. I discuss this in my French translation of Moroni's America, and I'll blog about it in upcoming days.
Posted by jonathan3d at 9:41 PM