Brother Scott is back, worse than ever 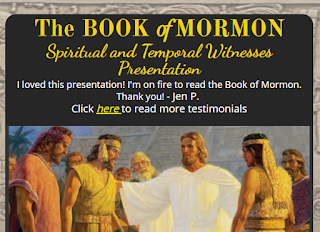 Several people noticed the ad in the print version of the Deseret News that comes with the Church News in Utah.

This "Brother Scott" is the gentleman I blogged about before.
http://bookofmormonwars.blogspot.com/2017/05/brother-scotts-book-of-mormon-witness.html
https://mormonmesomania.blogspot.com/2017/04/mesomania-for-youth.html
Only now it's even worse.
"Brother Scott" is co-opting Family Home Evenings by holding events on Mondays, Sept 11, 18, 25 and Oct 2.
Plus, he's targeting the youth.
He might as well tell kids how to resign from the Church as teach them the stuff he's teaching, because the "evidence" he offers directly contradicts what Joseph and Oliver taught about the Hill Cumorah, and he doesn't care.
Check out his web page here: http://bofmwitnesses.com/
___________
I've tried to talk to him nicely. So have others. He's completely intransigent, the epitome of zeal without knowledge. He went on a trip to Mesoamerica, apparently, and bought everything the local guides sold him (both intellectually and souvenirs).
And he's actually worse than our Meso friends at BYU because he's telling people stuff that even the Meso guys know is not credible.
One friend of mine heard him give his presentation at his ward, so he's having success getting invitations to speak in wards and stakes.
It's really tragic. A few minutes on the Internet and anyone can see his claims are nonsense. I showed just a few of them in my blogs, but I could have done more.
If he wasn't abusing the Family Home Evening schedule, I'd recommend people attend and try to talk sense to him, but don't waste your time on Mondays. He's not going to listen, anyway.
Posted by jonathan3d at 7:00 AM