Last week, to celebrate Book of Mormon Day (Sept 22), Book of Mormon Central (BOMC) announced that "People are sometimes surprised to discover that the plates of the Book of Mormon were not regularly used during the process of its translation."

This is clever sophistry. BOMC posits a particular theory as a fact, and then notes some people are "surprised" to discover this fact.

"People [Naive, ignorant LDS people, presumably, but not LDS scholars and anti-Mormons, both of whom have been claiming this all along] are sometimes surprised [other times they're not surprised?] to discover [one "discovers" truth, which BOMC will announce next] that the plates of the Book of Mormon were not regularly used during the process of its translation."

Notice how this is framed as a fact--a reality--not merely as one interpretation of many possible interpretations based on a variety of inconsistent, second-hand sources.

Instead, BOMC cites the book From Darkness unto Light which I also very much enjoyed the first time I read it. But then I read it again and reached a different conclusion.*

Basically, BOMC and other Mesoamerican advocates are promoting the same narrative as the CES Letter, summarized in this meme: 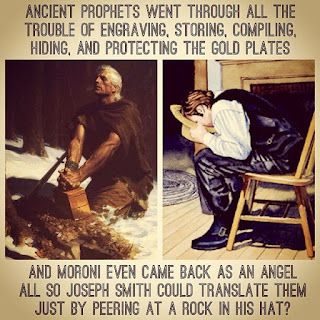 I don't think the historical sources require this theory.

In D&C 10:41, the Lord told Joseph "Therefore, you shall translate the engravings which are on the plates of Nephi."

This verse is critical because it informs us that Joseph translated specific engravings from specific plates. The BOMC/CES Letter theory would render D&C 10 moot.

I've pointed out before that Joseph didn't have the plates of Nephi at this point; he didn't get them until he arrived in Fayette.

Aside from that, consider the implications of the BOMC/CES Letter theory.

If Joseph translated the plates without looking at them, without studying them, and without even turning the plates as he went, then there was no reason for the Lord to even refer to the plates of Nephi.

For that matter, Joseph and Oliver never would have considered going back to the beginning to re-translate the Book of Lehi.

They wouldn't have known where to begin or end--and it wouldn't have mattered anyway, because, according to the BOMC/CES Letter theory, all Joseph did was read from the stone in the hat.

He and Oliver would have had no idea they had reached the end of the plates unless the stone told them, and it would not have been up to them to decide whether to re-translate the Book of Lehi.

It would have been up to the stone.

Joseph would have just kept reading from the stone in the hat.

BOMC notes a problem with their theory here: "There is also some indication that Joseph was at least occasionally aware of the relationship between the plates and the words he was dictating. He once explained that “the Title Page of the Book of Mormon is a literal translation, taken from the very last leaf, on the left-hand side of the collection or book of plates.”"

Are we to infer from this that the Title Page was the reason why Mormon and Moroni went to such effort to abridge the Nephite records and preserve them?

At BYU Education Week this year, I attended a Church history class in which the instructor taught us the BOMC/CES Letter theory that Joseph never actually used the plates. He said, "Somehow, though, Joseph knew the Title Page was on the last leaf of the plates."

He said this with a slight look of puzzlement, like how could Joseph have possibly known where the Title Page was when all he did was look at the stone in the hat?

He didn't discuss the obvious follow-up question; i.e., how could Joseph know the English version of the Title Page was "a literal translation" if he wasn't translating the actual engravings?
_____________

Mesomaniacs such as BOMC have to promote this CES Letter theory that Joseph didn't really translate the engravings because otherwise, their two-Cumorahs theory collapses.

If, as D&C 10 states, Joseph actually translated the engravings, and he had to translate the engravings on the plates of Nephi (which he didn't have in Harmony, as we know from the Title Page itself), then Mormon's depository was actually in New York, as Joseph and Oliver taught (and which others confirmed).

When Joseph Fielding Smith warned that the Mesoamerican/two-Cumorahs theory would cause members of the Church to become confused and disturbed in their faith in the Book of Mormon, I wonder if he anticipated that Book of Mormon Central would align itself with the CES Letter this way.

___________
*This book will be the subject of my first Kindle book review, which will be released in October. (By popular demand, I've written reviews of several LDS books that, to be useful, have to be long and detailed, so they are in small book format.)
Posted by jonathan3d at 4:13 PM