Since its inception, FairMormon has been leading its readers on a wrong course because it repudiates the Church's position of neutrality on Book of Mormon geography.

Because the management of FairMormon has Mesomania.

What started as a small understandable error that could have been easily corrected has, by now, misled thousands of people, LDS and otherwise.

FairMormon actively teaches its readers that Joseph Smith and Oliver Cowdery were wrong about Cumorah being in New York.

FairMormon teaches that Joseph and Oliver ignorantly speculated and thereby created a false tradition that misled the entire Church for 100 years.

Except the mistake was FairMormon's, not Joseph's and Oliver's.

That simple mistake has brought FairMormon to the point of claiming that Brigham Young falsely confirmed what Joseph and Oliver taught.

FairMormon claims that every prophet and apostle who has spoken about Cumorah, including members of the First Presidency in General Conference, were wrong.

President Uchtdorf's first talk as a member of the First Presidency, delivered in April 2008, was titled "A Matter of a Few Degrees." You can read it here: https://www.lds.org/general-conference/2008/04/a-matter-of-a-few-degrees?lang=eng

It's a classic that people still remember and discuss.

President Uchdorf related an account of a passenger jet that crashed in Antarctica because "someone had modified the flight coordinates by a mere two degrees." He explained that "The difference of a few degrees, as with the Antarctica flight ... may seem minor. But even small errors over time can make a dramatic difference in our lives."

This drawing depicts the problem. 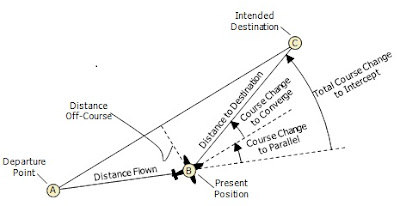 The longer you stay on the wrong course, the harder it is to get back to the correct one.

This is why FairMormon, BYU Studies, and the rest are unlikely to change course.

They would rather crash into the mountain of confusion and disturbing the faith of the members, as Joseph Fielding Smith put it, than admit error and change course.
______________

Joseph Smith and Oliver Cowdery put the Church on the correct course regarding Book of Mormon historicity and geography. They taught that Cumorah--the Cumorah of Mormon 6:6 specifically--was the hill in New York where Joseph obtained the plates.

The Church kept this course for about a hundred years before scholars from the Reorganized Church changed course and decided Cumorah was actually in Central America. LDS scholars embraced this approach, rejected what Joseph and Oliver taught, and led the Church on a different course.

The different course has led to great confusion, thanks to Church media, publications, and artwork that all depend on--and teach--the idea that Cumorah is not in New York.

Now we're at a point where a serious course correction is needed.

First, you'd see a handful of BYU faculty come out in support. Then you'd see more BYU faculty, and probably some CES people, shift to the New York Cumorah. You'd have local Church leaders saying they knew all along that Cumorah was in New York.

Which is where the vast majority of Church members are already.

It's really only among the intellectuals that the two-Cumorahs theory persists. Most members, as soon as they learn what Joseph and Oliver taught in Letter VII, embrace that teaching and reject the sophistry of the LDS intellectuals who continue to promote their Mesoamerican ideology.

A big course correction could come from BYU Studies. Maybe they would publish an article about Letter VII and the evidence that supports and corroborates what Joseph and Oliver taught.

Maybe even FairMormon would give readers an honest explanation of the North American setting.

I realize that seems unlikely, and it probably is so long as the current management of FairMormon remains in place, but hope springs eternal.

As I've mentioned before, the real tragedy is that FairMormon has so much good material on its site that most innocent members (and investigators) who go there don't realize how deeply misleading FairMormon is when it comes to Church history and Book of Mormon geography.

The Interpreter would never go along, of course, but soon enough they would be on their own island, abandoned to their fate. The Interpreter is a tragic story, as well, because they do publish some good things there. But they are even more intransigent than FairMormon, if that's possible.
_______________

I often get reports from people who have tried to talk to the LDS intellectuals who promote the two-Cumorahs/Meosamerican theories. The response is always the same. They couldn't care less about what you think. They won't discuss Letter VII and related aspects of Church history. They won't even consider a North American setting for the Book of Mormon.

It is far better for you do learn all you can. Don't rely on LDS intellectuals for information because they are pushing a specific agenda that repudiates what Joseph and Oliver taught, as well as the Church's neutrality position.

The course correction that matters most is the one we make individually.