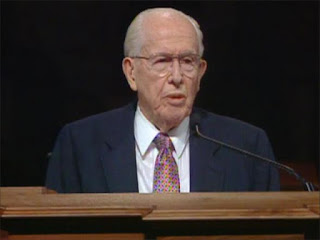 President Ezra Taft Benson focused on the Book of Mormon when he became President of the Church. In October, 1988, the last conference at which he personally spoke, he gave the classic sermon, "Flooding the Earth with the Book of Mormon."
https://www.lds.org/general-conference/1988/10/flooding-the-earth-with-the-book-of-mormon?lang=eng
This has been a landmark year in the history of the Church in the use of the keystone of our religion—the Book of Mormon. This sacred volume of scripture has brought more souls to Christ, both within and without the Church, than ever before....
The Book of Mormon is the instrument that God designed to “sweep the earth as with a flood, to gather out [His] elect.” (Moses 7:62.) This sacred volume of scripture needs to become more central in our preaching, our teaching, and our missionary work...
The time is long overdue for a massive flooding of the earth with the Book of Mormon for the many reasons which the Lord has given. In this age of the electronic media and the mass distribution of the printed word, God will hold us accountable if we do not now move the Book of Mormon in a monumental way.
We have the Book of Mormon, we have the members, we have the missionaries, we have the resources, and the world has the need. The time is now!
My beloved brothers and sisters, we hardly fathom the power of the Book of Mormon, nor the divine role it must play, nor the extent to which it must be moved.
Now, my good Saints, we have a great work to perform in a very short time. We must flood the earth with the Book of Mormon—and get out from under God’s condemnation for having treated it lightly. (See D&C 84:54–58.)
I have a vision of thousands of missionaries going into the mission field with hundreds of passages memorized from the Book of Mormon so that they might feed the needs of a spiritually famished world.
I have a vision of the whole Church getting nearer to God by abiding by the precepts of the Book of Mormon.
Indeed, I have a vision of flooding the earth with the Book of Mormon.
I do not know fully why God has preserved my life to this age, but I do know this: That for the present hour He has revealed to me the absolute need for us to move the Book of Mormon forward now in a marvelous manner. You must help with this burden and with this blessing which He has placed on the whole Church, even all the children of Zion.
Moses never entered the promised land. Joseph Smith never saw Zion redeemed. Some of us may not live long enough to see the day when the Book of Mormon floods the earth and when the Lord lifts His condemnation. (See D&C 84:54–58.) But, God willing, I intend to spend all my remaining days in that glorious effort. In the name of Jesus Christ, amen.
_______________
A lot of people are doing a lot of work to fulfill President Benson's vision.
Unfortunately, the greatest impediment is coming from within the Church, from LDS scholars and educators who continue to insist that Joseph Smith and Oliver Cowdery were wrong about Cumorah being in New York.
They continue to teach the youth that all the modern prophets and apostles who affirmed what Joseph and Oliver taught were wrong.
Until this issue gets resolved, President Benson's challenge to flood the Earth with the Book of Mormon will continue to be muddled in confusion, disruption, fantasy maps (like the one they're using at BYU) and other disasters.
Posted by jonathan3d at 7:30 AM