The last section of this series on Cumorah looks at evidence. (There are 8 sections because President Cowdery wrote 8 letters or essays, which I call the original Gospel Topics essays.)

In my view, members of the Church should accept the New York Cumorah purely because the prophets have taught this consistently and repeatedly. But that requires faith.

Instead, certain intellectuals in the Church* continue to teach members (including students at BYU/CES) that they should reject the teachings of the prophets on this topic.

I think M2C (the Mesoamerican/two-Cumorahs theory) is a disaster because:
- it contradicts the plain, repeated and consistent teachings of the prophets;
- it causes "discord, division and confusion" (see below); and
- it teaches Church members to reject the prophets whenever they contradict the teachings of the intellectuals.

A more self-serving teaching cannot be imagined; I think M2C intellectuals should be embarrassed by their teachings.

But because the M2C intellectuals have trained thousands of faithful LDS at BYU/CES for decades, the preference for "evidence" over the words of the prophets is now deeply ingrained among LDS people generally.

Consequently, this week, we'll look at the evidence.
_____

To start off, we need context. Moroni explained the concept of confirmation bias when he first appeared to Joseph Smith in 1823, he told Joseph 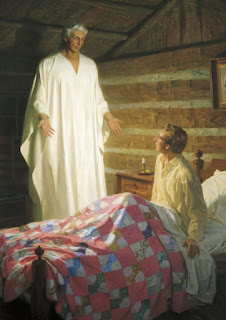 "Wherever the sound shall go it shall cause the ears of men to tingle, and wherever it shall be proclaimed, the pure in heart shall rejoice, while those who draw near to God with their mouths, and honor him with their lips while their hearts are far from him, will seek its overthrow, and the destruction of those by whose hands it is carried. Therefore, marvel not if your name is made a derision, and had as a by-word among such, if you are the instrument in bringing it, by the gift of God, to the knowledge of the people." (President Cowdery, Letter IV, found in JSP here: http://www.josephsmithpapers.org/paper-summary/history-1834-1836/68).

Joseph later summarized Moroni's words by writing that he said "that my name should be had for good and evil among all nations, kindreds, and tongues, or that it should be both good and evil spoken of among all people." (Joseph Smith-History 1:33).

Confirmation bias leads people to accept or reject Joseph Smith, just as Moroni explained. This is the threshold test for those who hear about the Restoration of the Gospel, and we see it play out on a daily basis around the world as missionaries preach the Gospel.
_____

I assume that most people who read this blog have passed the threshold test of confirmation bias; i.e., they rejoice in the Restoration and speak good of Joseph Smith's name.

What's the next test of confirmation bias for those who accept Joseph Smith as a prophet?

Confirmation bias leads people to accept or reject the teachings of the other duly ordained prophets and apostles.

This includes their teachings about the Hill Cumorah in New York.

The M2C intellectuals try to persuade Church members that we don't have to accept the prophets and apostles when they (the prophets) disagree with the conclusions of the intellectuals. That's why they openly and proudly teach that Cumorah cannot be in New York.

Elder Russell M. Ballard spoke about this in General Conference in 1999 in an address titled "Beware of False Prophets and False Teachers."

The moment an individual rises up assuming the right to control and to dictate or to sit in judgment on his brethren, especially upon those who preside, he should be promptly checked, or discord, division and confusion would be the result. Every man and woman in this Church should know better than to yield to such a spirit; the moment that such a feeling presents itself to them they should rebuke it, as it is in direct antagonism to the order of the Priesthood, and to the spirit and genius of this work. We can accept nothing as authoritative but that which comes directly through the appointed channel, the constituted organizations of the Priesthood, which is the channel that God has appointed through which to make known His mind and will to the world.

Most members of the Church, once they learn what the prophets and apostles have consistently taught, accept those teachings. That's why the M2C intellectuals do everything possible to suppress and conceal what the prophets and apostles have taught. That's also why they have gone to such lengths to imprint their M2C dogma on the minds of the Saints, starting at a young age, with media, paintings, maps, etc.

As President Joseph F. Smith warned, the result of the M2C teachings are "discord, division and confusion."

Joseph F. Smith went on to explain that "Through Joseph then, the Lord revealed Himself to the world and through him He chose the first Elders of the Church—men who were honest in their hearts; men whom He knew would receive the word and labor in connection with Joseph in this great and important undertaking; and all that have been ordained to the Priesthood, and all that have been appointed to any position whatever in this Church, have received their authority and commission through this channel, appointed of God, with Joseph at the head."

One of these, of course, was President Oliver Cowdery.

What did President Joseph F. Smith think of President Cowdery?

In 1899, 16  years after delivering the sermon that Elder Ballard quoted, Joseph F. Smith was the Editor of the Improvement Era. He was still Second Counselor in the First Presidency, this time under President Lorenzo Snow. He had been an Apostle for 33 years by that point, and had served as a counselor in the First Presidency under Brigham Young, John Taylor and Wilford Woodruff, along with George Q. Cannon.

Here's the link to the cover page:
https://archive.org/stream/improvementera29unse#page/n0/mode/2up.

Here's the link to the page where Letter VII starts.

Yet the M2C intellectuals consider themselves higher in authority than President Cowdery.

Since President Cowdery published Letter VII, every prophet and apostle who has addressed the question of Cumorah has affirmed it is in New York.

The only ones who claim otherwise are M2C intellectuals who seek to advance their own agenda that members of the Church should believe them instead of the prophets and apostles.
_____

Normally, we members of the Church would accept what the prophets teach. President Cowdery wrote Letter VII with the assistance of Joseph Smith. The other members of the First Presidency at the time approved it, as did all the members of the Twelve who ever addressed the topic of Cumorah. All of the subsequent prophets and apostles who have ever spoken or written about Cumorah have affirmed Letter VII's teaching about Cumorah in New York.

But the M2C intellectuals in the Church disagree. For decades, they have been teaching students at BYU/CES that the prophets and apostles are wrong.

They continue to do so.


All because of M2C (the Mesoamerican/two-Cumorahs theory).

Their influence has infiltrated Church media, curriculum, visitors centers, etc., as I've shown many times on this blog and elsewhere.

The influence of the M2C intellectuals is pervasive. Because they exalt their "evidence" over the words of the prophets, we will look at their evidence as well as the evidence that supports the teachings of the prophets.

I repeat what I wrote at the outset: I completely reject the M2C dogma that accepts what the prophets teach only when the prophets agree with the intellectuals.

In my view, the evidence from archaeology, anthropology, geology, and geography supports and corroborates the teaching of the prophets, but that's not the reason I believe the teachings of the prophets and apostles. My bias is belief in prophetic teachings. I think faith precedes the miracle.

*There is no need to identify any individuals, but I'm referring to "mainstream" LDS scholars. You see their work in FairMormon, BYU Studies, the Interpreter, Meridian Magazine, Book of Mormon Central, BMAF.org, the old FARMS, etc.