Last week, I noted that Lehi explained to his family what the Lord told him about the promised land.

9 Wherefore, I, Lehi, have obtained a promise, that inasmuch as those whom the Lord God shall bring out of the land of Jerusalem [i.e., Lehi's group as well as Mulek's] shall keep his commandments, they shall prosper upon the face of this land; and they shall be kept from all other nations, that they may possess this land unto themselves. And if it so be that they shall keep his commandments they shall be blessed upon the face of this land, and there shall be none to molest them, nor to take away the land of their inheritance; and they shall dwell safely forever.

10 But behold, when the time cometh that they shall dwindle in unbelief, after they have received so great blessings from the hand of the Lord—
11 Yea, he will bring other nations unto them, and he will give unto them power, and he will take away from them the lands of their possessions, and he will cause them to be scattered and smitten.

Joseph Smith translated this passage in Fayette, NY, in June 1829. The Book of Mormon was published in March, 1830. Two months later, Lehi's prophecy was formally fulfilled by the government of the United States.

Here's how the Library of Congress summarizes the history:

The Indian Removal Act was signed into law by President Andrew Jackson on May 28, 1830, authorizing the president to grant unsettled lands west of the Mississippi in exchange for Indian lands within existing state borders. A few tribes went peacefully, but many resisted the relocation policy. During the fall and winter of 1838 and 1839, the Cherokees were forcibly moved west by the United States government. Approximately 4,000 Cherokees died on this forced march, which became known as the "Trail of Tears."

The U.S. government had been forcibly removing Indians from their tribal lands before this, but this Act led to the nearly complete removal of Indian tribes east of the Mississippi (River Sidon).

Here is a map and painting of the infamous "Trail of Tears." 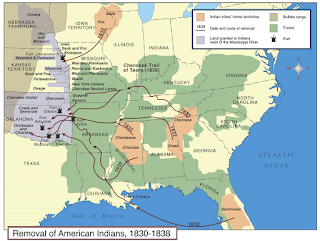 Although this map shows the removal of tribes from the southeast and upper Mississippi River basin in the early 1830s, Indian tribes from Ohio were also removed.

When you follow the history, you see how literally Lehi's prophecy was fulfilled.
1. His descendants would dwell in unbelief.
2. The Lord would bring other nations unto them (France and England).
3. Their lands would be taken from them.
4. They would be scattered and smitten.

Most Algonquian tribes allied themselves with the French until France lost its North American colonies in the French and Indian War (1756-1763). Fearing white settlement of their lands, many Algonquian-speaking peoples then sided with the British in the American Revolution, and in the War of 1812. By the 1840s, most Algonquian-speaking tribes had been forcibly removed west of the Mississippi under increasingly aggressive U.S. American Indian removal policies. 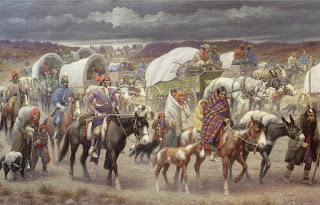 If Lehi had a vision of the future, this painting depicts it. 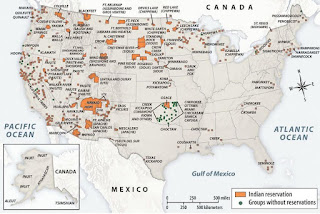 The outcome of the Indian Removal Act is shown in this map.

Notice how the area around the Mississippi and east from there has very little land left for the Native Americans who once lived there.

This strikes me as a direct fulfillment of Lehi's warning and prophecy, published in the Book of Mormon before the Indian Removal Act was signed by the President. 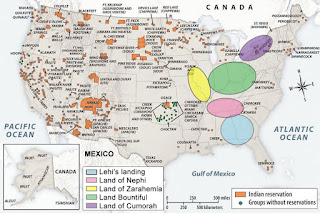 For those unfamiliar with the proposed geography in Moroni's America, which is based on the text of the Book of Mormon, here is a map showing the major areas described in the text.

Recall that Joseph Smith himself described the states of Ohio, Indiana and Illinois as "the plains of the Nephites."

You can see that description here (scroll down to the last line):
https://www.josephsmithpapers.org/paper-summary/letterbook-2/62

The Book of Mormon makes so much more sense when we heed and believe the teachings of the prophets, starting with the New York Cumorah.