The Church updated its statistics page,* which you can see here:

They have membership, unit, and other statistics by continent and country. They only show current statistics, however; they don't show the detail for prior years.

They do show aggregate historical data, such as this: 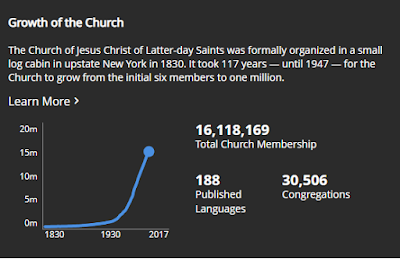 Most people are familiar with this story; i.e., the Church has grown substantially since it was founded in 1830. 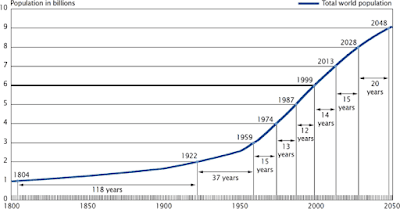 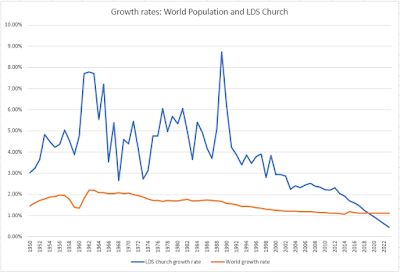 Next, I did a chart of comparative growth rates, using online data and projecting it forward. It's well known that in the last year for which we have statistics (2017), the Church's growth rate was the lowest in decades. If the current trend continues, in 2019 the growth rate of the Church will roughly equal world population growth rates.

This seems surprising to me because the Church is expanding into new countries, especially in Africa.  As the Church becomes better known in these areas, shouldn't we expect greater growth?

Most of the growth in the Church seems to be coming from Africa, at least in percentage increases. Countries with large membership, especially in the United States, will continue to have more converts, even if growth is lower as a percentage.

This chart merely reflects percentage growth based on total membership. It says nothing about activity rates, such as sacrament meeting attendance, tithe payers, enrollment in CES, etc. Activity is partly reflected by the number of units; i.e., fewer units per capita generally means lower activity rates. 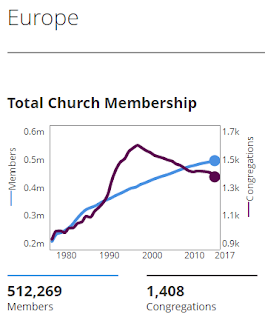 A good example is this chart of membership in Europe.

Because we don't have the historical membership broken out by country, we can't see where the growth is. I suspect much of the growth since around 2000 has been in Eastern Europe, where there was little Church presence until the collapse of communism.

The decline in the number of congregations suggests lower activity rates.

In France, for example, they are closing two branches that were operating when I was a missionary there decades ago.

What does all this mean?

There are many variables involved, and we all have our own experiences and opinions about these trends. We can't isolate one factor as the main cause of the trends. However, in my experience, the Internet plays a major role.

Most investigators are inclined to google the Book of Mormon before they pray about it. When they do so, they quickly come across negative information, such as the CES Letter (which was published in 2013). FairMormon and others responded, leading to a back-and-forth that was mostly ineffective in terms of supporting the position of the Church.

This coincides with the decline in growth rates. Correlation doesn't equal causation, but maybe in this case there is a link.

After all, if you're a sincere investigator (or a youth in the Church), and you encounter the CES Letter or other criticisms, what do you do? The critics challenge the divine authenticity of the Book of Mormon, claiming there's no evidence for it, etc.

If you go to CES, BYU, FairMormon, or Book of Mormon Central, you quickly learn that the CES Letter is correct: all of these supposedly faithful sources declare that the prophets were wrong about the Hill Cumorah in New York, which is the only specific link between the Book of Mormon and the real world.

Naturally, investigators and youth conclude that if the prophets were wrong about that, how can we trust other truth claims?

IMO, until we accept what the prophets have taught, these trends will continue.