The Keystone of the Book of Mormon

One could find support in past teachings for all kinds of theories about Book of Mormon geography, with one exception: every prophet and apostle who has addressed the topic has affirmed that the Hill Cumorah is in New York. Not one has repudiated his predecessors.

The Book of Mormon is the keystone of our religion.

In General Conference, President Ezra Taft Benson taught, "A keystone is the central stone in an arch. It holds all the other stones in place, and if removed, the arch crumbles.

Our beloved brother, President Marion G. Romney, who celebrated his eighty-ninth birthday last month and who knows of himself of the power that resides in this book, testified of the blessings that can come into the lives of those who will read and study the Book of Mormon.... 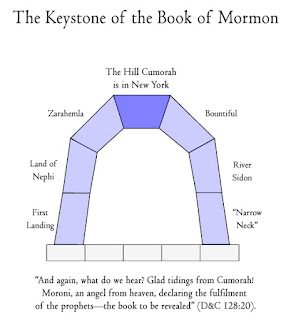 The Hill Cumorah is the keystone of the historicity of the Book of Mormon.

As the only specific location unambiguously identified by the prophets, is the touchstone between the Book of Mormon and the real world.

Remove Cumorah, and there is no keystone for the historicity of the Book of Mormon. We're left with nothing but abstract fantasy maps that portray the Book of Mormon as a myth with no connection to the real world.

In General Conference, President Marion G. Romney taught, "In the western part of the state of New York near Palmyra is a prominent hill known as the “hill Cumorah.” (Morm. 6:6.) On July twenty-fifth of this year, as I stood on the crest of that hill admiring with awe the breathtaking panorama which stretched out before me on every hand, my mind reverted to the events which occurred in that vicinity some twenty-five centuries ago—events which brought to an end the great Jaredite nation....

Thus perished at the foot of Cumorah the remnant of the once mighty Jaredite nation, of whom the Lord had said, “There shall be none greater … upon all the face of the earth.” (Ether 1:43.)


As I contemplated this tragic scene from the crest of Cumorah and viewed the beautiful land of the Restoration as it appears today, I cried in my soul, “How could it have happened?”

[The Nephite] civilization came to an end for the same reason, at the same place, and in the same manner as did the Jaredites’....

Now my beloved brethren and sisters everywhere, both members of the Church and nonmembers, I bear you my personal witness that I know that the things I have presented to you today are true—both those pertaining to past events and those pertaining to events yet to come."

The prophets and apostles have been clear and specific about two things:

1. The Hill Cumorah is in New York.

2. We don't know where the rest of the events took place.

There are many differences of opinion about the rest of Book of Mormon geography, and that's fine. These ideas can encourage people to study the text for themselves.

Different theories and different evidence may be meaningful for different people.

There is no reason to dispute about these.

People can present their ideas, along with all the relevant information including the teachings of the prophets and the available extrinsic evidence, and then let others make informed decisions for themselves.

But there is no excuse for rejecting the consistent and persistent teachings of the prophets about the New York Cumorah.
_____

When we think about the teachings of the prophets about Cumorah, we could keep in mind something else President Benson said in his talk about the Keystone:

“And your minds in times past have been darkened because of unbelief, and because you have treated lightly the things you have received—

“Which vanity and unbelief have brought the whole church under condemnation.

“And this condemnation resteth upon the children of Zion, even all.

“And they shall remain under this condemnation until they repent and remember the new covenant, even the Book of Mormon and the former commandments which I have given them, not only to say, but to do according to that which I have written—

“That they may bring forth fruit meet for their Father’s kingdom; otherwise there remaineth a scourge and judgment to be poured out upon the children of Zion.” [D&C 84:54–58]"