I don't think I've persuaded anyone of anything anyway, so it's really a moot point.

Plus, I don't think people even can be persuaded, except by depriving them of important information. 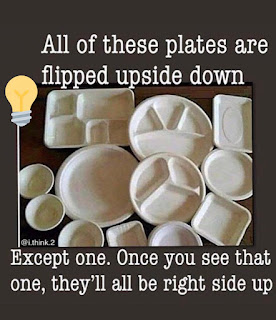 People only change their minds of their own volition. This graphic is a good example. It depicts upside down plates.

I can't persuade you that the plates are right side up. Who are you going to believe, me or your lying eyes?

Nothing I can say will enable you to see the plates being right side up. You have to discover the outlier (the fact) and experience the change yourself.

This is a nice metaphor for education. Sometimes one fact can entirely change our understanding of reality. That's why education about facts is so essential.

In my view, there's a distinction between persuasion and education. The difference is not a fine line or a grey area. It's a bright line.

I'm opposed to persuasion. I'm in favor of education. It's that simple.

I want people to be able to make informed decisions, and that means they need good information.

As President Nelson said, "good inspiration is based upon good information."

Good information is not the product of censorship. It's not the outcome of sophistry and logical fallacies.

If I was trying to persuade people, I would use the tactics employed by Book of Mormon Central Censor, FairlyMormon, and the rest of the M2C citation cartel. I would censor sources and interpretations that contradict my views. I would use logical fallacies. I would appeal to the authority of my like-minded academic peers. I would use peer-approval instead of peer-review when I publish articles. I would use my position as an employee to imprint the M2C interpretation of the text, to the exclusion of alternative views. Basically, I would use Orwell's 1984 as my handbook.

Maybe, like some M2C intellectuals lately, I would claim I'd been hired by the prophets so my personal, academic opinions cannot be analyzed, criticized, or disagreed with.

But I don't do that. Unlike the M2C citation cartel, I don't have "credentials" or any position of authority to enforce my views.

Instead, I do research to discover facts, which I then share on this blog and elsewhere. I discuss various interpretations of the facts. Sometimes the facts change the views of those who learn about them, but that's not me persuading anyone. That's people learning new facts and making informed decisions for themselves.

A big problem we have in the Church is this: as long as the M2C citation cartel and revisionist historians persist in seeking to persuade by censoring information, using logical fallacies, and appealing to their credentials, their followers cannot make informed decisions.

Education, not persuasion, leads me to discuss factual errors and logical fallacies that I see. To do that, I provide my red-line comments to academic material so everyone can see that I'm not "cherry picking" or hiding anything. I also welcome, even solicit, corrections whenever I mistake or overlook a relevant fact.

None of this is intended to persuade. It's all intended to educate, so people can make informed decisions on their own.
_____

A good example of this is a recent post about Martin Harris, which you can see here:

In that post, I set out a fact and then explain two alternative explanations. Readers are encouraged to consider the facts and reach their own conclusions. It's pure education, not persuasion.
_____

One reason I got involved with Church history and Book of Mormon historicity is because several people, including former missionary companions, family members, and business associates, challenged my beliefs in the Book of Mormon, the divinity of the Restoration, etc.

They made some good points, based on (i) facts that I didn't know and (ii) facts I had known didn't fit with the prevailing narrative, but that I had "put on the shelf."

I've since resolved what initially appeared to be troublesome facts, but those issues remain troublesome for many people. I think the problem is two-fold.

1. Many aspects of the prevailing narratives (M2C, Church history, Gospel Topics essays) are not credible because they contradict, or don't explain, important facts.

2. Church employees at BYU, CES and COB don't teach these important facts, so when people first learn the facts from critics, the critics have more credibility.

I'll be discussing all of this in upcoming posts and books, but I mention it here because it's related to my experience that education, not persuasion, is the way to go.