More on The Next Mormons - reasons for leaving

The Next Mormons book includes the results of surveys of both active and former members of the Church. The table below (11.3) ranks the top 10 "reasons for leaving." 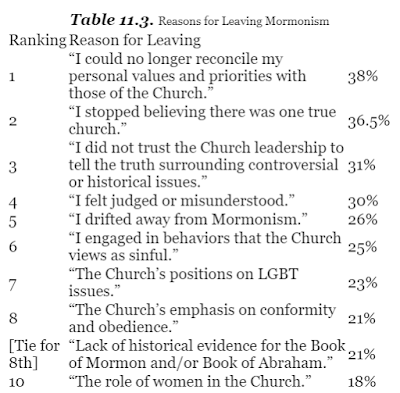 _____
#1 is the reason why people have rejected the Church (and every religion or philosophy) since the beginning of time. There's a caveat, though, that I'll address in my other blog (mentioned below).

Notice that "lack of historical evidence for the Book of Mormon" ranks all the way down to #8. That seems to be a function of how the survey was worded, because reason #2 ("I stopped believing there was one true church") ultimately represents disbelief in the keystone of our religion--the Book of Mormon.

In fact, IMO, the fantasy/mythological maps that CES and BYU are using to teach the Book of Mormon to the youth in the Church around the world will inevitably lead those youth to disbelieve in the divine authenticity of the book, regardless of what one expects from "historical evidence."
_____

There's another key point in this survey. Reason #3 is "I did not trust the Church leadership to tell the truth surrounding controversial or historical issues."

But both the Gospel Topics Essays and the Saints book have aggravated the problem instead.
_____

They refuted the claim that the Book of Mormon was fiction by declaring it was a fact that the Hill Cumorah of Mormon 6:6 was in western New York. That teaching has been reaffirmed by every prophet/apostle who has ever publicly and formally addressed the issue.

Now, both the Gospel Topics Essays and the Saints book reject that teaching.

We're told that the Church has "no position" regarding Cumorah. "No position" on the explicit teachings of the past prophets and apostles about Cumorah can only mean that they were not telling the truth, that they were wrong, or, maybe worst of all, that we cannot rely on what they taught.

There's another key point to consider.

Another table (11.4 below) breaks out the reasons by the respective generations of the respondents. Among Millennials, two reasons tied for #1:

"Felt judged or misunderstood"
"Did not trust the church leadership"

What are millennials to think when the Gospel Topics Essays and the Saints book teach them not to believe what past prophets and apostles have taught about the New York Cumorah?

The New York Cumorah was the one definite touchstone between the Book of Mormon and the real world.

Now, that one touchstone has apparently been jettisoned in favor of a contorted "Mesoamerican/two-Cumorahs" (M2C) theory that was developed by scholars who rejected Brigham Young as the successor to Joseph Smith and still relies on illusory correspondences to a Mayan culture that has nothing to do with the teachings in the Book of Mormon.

To be sure, the Gospel Topics Essay and the Saints book don't tell us we must reject what the prophets and apostles have taught about the New York Cumorah.

And, in many cases, it is LDS millennials themselves who are promoting M2C (albeit many of them are employed by Book of Mormon Central Censor, which requires them to promote M2C.)
_____

All this said, the Gospel Topics Essay recognizes that there are different views on this topic, and members of the Church are free to believe whatever they want. We're allowed to support the prophets, so long as we don't claim our views have prophetic and/or Church support.

That's the approach we take on this blog.

We're saying that two of the top ten reasons people give for leaving the Church are understandable when we're being told we can't rely on what past prophets and apostles have taught about the New York Cumorah.
_____

All this said, the answer of Joseph and Oliver to the critics of the Book of Mormon remains the best answer to critics today.
_____

Each of the top 10 reasons in the survey deserves attention.

I have another blog where I am discussing these things. In coming weeks, I'll discuss each of these "top ten" reasons.

I started with the translation issue. 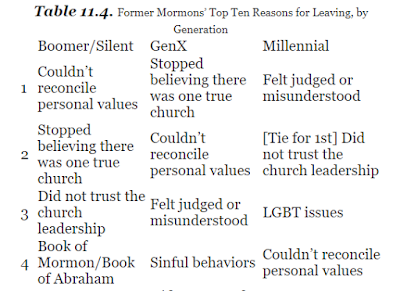