Last week, I suggested that the Hill Cumorah is the keystone of Book of Mormon historicity. According to the Gospel Topics Essay on Book of Mormon Geography, the Church has only one position, which is it has no position on the geography.

That leaves us with three Cumorahs to consider.

I'll outline them briefly here and discuss them in more detail tomorrow.
___

#1. Cumorah is in New York (teachings of past LDS prophets and apostles)

#2. Cumorah is anywhere except New York, but it is somewhere on Earth (teachings of LDS intellectuals but no LDS prophets or apostles)

#2a. Cumorah can best be understood in a fictional setting, but it existed in a real place somewhere in "the Americas" (teachings of BYU/CES)

#3. Cumorah is nowhere because it is fictional (teachings of some LDS members and most LDS critics)

Okay, I realize I just listed 4 Cumorahs, but #2a is really a hybrid between #2 and #3, so I didn't count it separately.

I'm reviewing these 3 Cumorahs because, if current trends continue, Cumorah #3 appears destined to prevail not only in the world as a whole, but also among members of the Church.
_____ 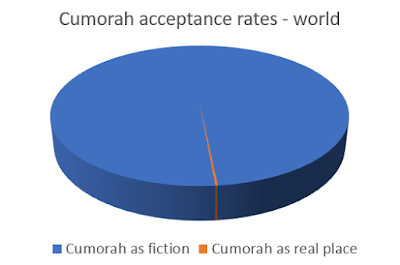 If I were to rank these different Cumorahs by acceptance rates, #3 is overwhelmingly the favorite in the world.

The percentage of the world's population that doesn't think Cumorah is fiction would show up as a thin line on a pie chart.

That's assuming every member of the Church accepts Cumorah as an actual location in the real world. 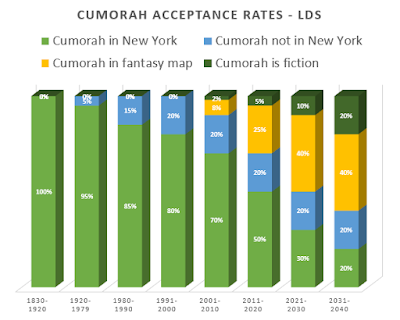 Now, let's consider which Cumorah members of the Church accept.

The conceptual graph to the left shows changes in beliefs over time.

From 1830 to about 1920, no one questioned the New York location of the the Hill Cumorah.

Letter VII was published in the Messenger and Advocate and then republished in the Gospel Reflector, the Millennial Star, the Times and Seasons, the Prophet, and the Improvement Era.

The New York Cumorah was taught in General Conference by members of the First Presidency. It was taught in doctrinal books published by the Church, including Jesus the Christ and A Marvelous Work and a Wonder.

From 1879 to 1920, the New York Cumorah was stated as a fact in the official editions of the Book of Mormon, indicated in a footnote to Mormon 6:6.

In the early 1900s, scholars from the Reorganized Church of Jesus Christ of Latter-day Saints (RLDS) opined that New York was too far from Central America to be the location of Cumorah. They speculated that Cumorah was in Mesoamerica; i.e., M2C.

Some LDS people began accepting this Mexican Cumorah. Elder Joseph Fielding Smith objected, warning that this idea would cause members of the Church to become confused and disturbed in their faith. Elder Smith's position prevailed until about the late 1950s, when more scholars began dicussing the M2C idea. By the 1970s, it was becoming more widely accepted.

In the 1970s, President Marion G. Romney and Elder Mark E. Petersen both gave General Conference addresses declaring that the Hill Cumorah of Mormon 6:6 was in New York, but M2C scholars ignored them, deeming their conference talks to be merely personal opinions that were incorrect because M2C was correct.

In 1990, the Office of the First Presidency released a letter stating that "The Church has long maintained, as attested to by references in the writings of General Authorities, that the Hill Cumorah in western New York state is the same as referenced in the Book of Mormon." The letter had been personally approved by Ezra Taft Benson, Gordon B. Hinckley, and Thomas S. Monson.

Nevertheless, M2C scholars deemed this as unofficial and incorrect. They continued teaching and promoting M2C.

Now, the anonymous Gospel Topics Essay recognizes that "individuals may have their own opinions regarding Book of Mormon geography and other such matters about which the Lord has not spoken."

The Lord has told us He speaks through his ordained leaders. Every prophet/apostle who has ever addressed the topic has affirmed the New York Cumorah. So far, no Church leaders have officially repudiated the teachings of the prophets and apostles regarding Cumorah.

Nevertheless, the Gospel Topics Essay says the Church doesn't take a position regarding these teachings about the New York Cumorah, so Cumorah #1 is just one option to consider, along with #2, #2a, and #3.

We can still evaluate the New York Cumorah using purely academic and scientific criteria, as I do in tomorrow's post.
_____

The trend toward M2C accelerated into the present (2019), accompanied by three developments.

1. CES and BYU stopped teaching students what the prophets have taught about Cumorah.

By now, most youth and young adults have been taught with these fantasy maps.

Going forward, it seems likely that the fantasy maps will become even more widespread, with the consequence that more members of the Church will naturally conclude that Cumorah is entirely fictional.

I think in the long term it is psychologically difficult, if not impossible, for someone raised to think of the Book of Mormon in terms of a fantasy map to also think of it as a real-world account of real-world people.
_____