The cement hoax is one of my favorites.

Everyone knows that Mesoamerica features impressive cities and structures made of stone and cement. I've visited many of them. Back in the day, many of these sites were completely open, with no guards or even fences. You could climb all over them, and I have.

Mayan culture is fascinating, and we're learning more and more about it all the time. My kudos to all the Mesoamerican archaeologists and linguists who are helping us understand that culture.

But it has nothing to do with the Book of Mormon.

The M2C intellectuals want people to believe that two brief references in the Book of Mormon describe the massive Mayan stone-and-cement structures throughout Mesoamerica.

Naturally, the Mayans built with stone and cement. In a jungle, wood structures don't last long.

Which explains how we know the Nephites did not live in a jungle.

The Nephites built with wood and cement, not stone and cement.

One of my favorite articles from Book of Mormon Central explains the M2C cement hoax. I commented on it here:

Here are the posts so you don't have to click through to read them.
_____

Only known Nephite cement is in New York, not Mesoamerica

I'm getting questions about cement, so I'll repeat what I've said about one of my favorite "Kno-Whys" of all time.

You can see it here: https://knowhy.bookofmormoncentral.org/content/when-did-cement-become-common-in-ancient-america

I blogged about it before: http://bookofmormonwars.blogspot.com/2016/11/cement.html. I have a few more comments below, but first, let's talk about the only known instance of Nephite cement.
_________

The only known Nephite cement was the cement that Moroni used when he built the stone box for the plates, as described by Joseph and Oliver.

Unless by now the Mesomaniacs have talked themselves into disbelieving what Joseph and Oliver said about the box, even they have to admit that Moroni used Nephite cement in New York. There is no other instance of Nephite cement that we can identify with 100% confidence.

"The box in which they lay was formed by laying stones together in some kind of cement." Joseph Smith-History 1:52.

Oliver Cowdery (who, according to Book of Mormon Central, was an ignorant speculator so you won't find this in any of their no-wise) described the situation on the Hill Cumorah this way:

"First, a hole of sufficient depth, (how deep I know not) was dug. At the bottom of this was laid a stone of suitable size, the upper surface being smooth. At each edge was placed a large quantity of cement, and into this cement, at the four edges of this stone, were placed, erect, four others, their bottom edges resting in the cement at the outer edges of the first stone. The four last named, when placed erect, formed a box, the corners, or where the edges of the four came in contact, were also cemented so firmly that the moisture from without was prevented from entering. It is to be observed, also, that the inner surface of the four erect, or side stones was smoothe. This box was sufficiently large to admit a breast-plate, such as was used by the ancients to defend the chest, &c. from the arrows and weapons of their enemy. From the bottom of the box, or from the breast-plate, arose three small pillars composed of the same description of cement used on the edges; and upon these three pillars was placed the record of the children of Joseph, and of a people who left the tower far, far before the days of Joseph, or a sketch of each..."

This was in New York, not Mesoamerica.

It shouldn't surprise anyone that Moroni knew how to work with cement in New York; he and his father Mormon wrote the Book of Mormon while they lived in what is now New York. Moroni told Joseph that the record was "written and deposited not far from" his home.

The fun part about this no-wise is how the Book of Mormon never mentions the people building with stone (except one wall in Alma 48:8). They built with wood and with wood and cement.

Helaman 3:11 And thus they did enable the people in the land northward that they might build many cities, both of wood and of cement.

And yet, all the evidence cited by the no-wise involves ancient Central Americans building with stone and cement.

This might seem like nitpicking, but it's an essential difference. If we're looking for the Book of Mormon culture described by the text, we're not looking for a culture that built with massive stones, engraved their history on stella, etc.

In fact, in a thousand years of history, exactly one engraved stone is even mentioned (Omni 1:20), and that was because its uniqueness made it so remarkable. And it wasn't even a Nephite or Lamanite who engraved it.

We're looking for a culture that built with earth and wood, primarily. They only used cement when they needed to let timber grow, because they preferred to build with timber. Only in one instance, Helaman 3, (again, so unusual it deserved special mention) with wood and cement.

Of course the Mesoamerican/two-Cumorahs advocates cite "cement" as a "correspondence" between the Book of Mormon and Mesoamerica. I'd like to know of any human society that did not use a material that could be called "cement." It's another illusory correspondence, designed to support the rejection of what Joseph and Oliver taught about Cumorah in New York.
_______________

You can see archaeological reconstructions of ancient wood and cement structures at museums in Ohio.

And they are houses, just as the Book of Mormon describes.

Naturally, we don't expect much, if any, Nephite cement to exist today. Even modern cement doesn't last a long time where there is freezing and thawing.

Notice that Moroni knew this when he buried his stone box into the hill Cumorah and kept the moisture from entering.

We all wish Joseph or Oliver had kept a sample of Moroni's cement. But at least they left us this detailed account of it.

Which, in any rational world, would be enough evidence to tell us where the Book of Mormon actually took place.
_____ 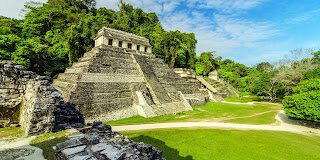 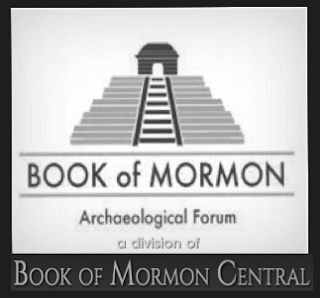 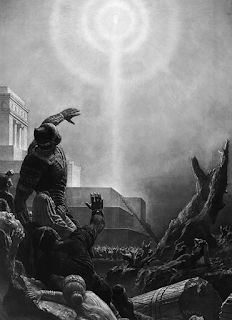 The scripture says they built houses of cement, and cities "both of wood and of cement." While there may have been Mesoamerican cities made of wood and cement, the ones cited in the 1842 Times and Seasons articles that started the Mesoamerican theory are all stone and cement (referring to Teotihuacan and the cities discovered by Stephens and Catherwood). Maybe the Book of Mormon says they built cities and pyramids out of stone and cement, but not in the version Joseph translated.
Alma 38:8 says they built walls of stone around the cities, but look at the verse in context:
Alma 48:8
8 Yea, he had been strengthening the armies of the Nephites, and erecting small forts, or places of resort; throwing up banks of earth round about to enclose his armies, and also building walls of stone to encircle them about, round about their cities and the borders of their lands; yea, all round about the land.
They built banks of earth and also walls of stone--which is what the Hopewell in North America did, including the mounds Joseph described as Nephite.
It's important to remember that they only built with cement because the lacked enough timber. This was a one-time exception. In the entire text, the only time they mention building with cement and wood was in Helaman 3.
Consequently, in my opinion these cement references in the text exclude Mesoamerica as a potential location described by the text.
Posted by jonathan3d at 7:30 AM