But they should, because it was RLDS scholars who developed the Mesoamerican/two-Cumorahs theory (M2C).

Maybe it is not a coincidence that the RLDS scholars published their book explaining M2C after the LDS Church began trying to purchase the Hill Cumorah in New York. But when we understand the nature of the rivalry, maybe that was intentional.

Either way, LDS scholars embraced the RLDS M2C theory over the objections of LDS leaders.

Today, thanks to the academic cycle, M2C is now being taught throughout the Church.

This means that RLDS scholars have prevailed over LDS leaders who objected to M2C.

In fact, M2C is the only Book of Mormon setting taught today in the Church, despite the official policy of "neutrality" expressed in the Gospel Topics Essay on Book of Mormon Geography. We see it in the visitors centers, the art and media, and in the CES and BYU curriculum. The Saints book deliberately changed Church history to accommodate M2C (discussed here: https://saintsreview.blogspot.com/).

We wonder, how did this happen?

More importantly, can the M2C hoax be exposed and rejected?

That's up for each member of the Church to decide individually.
_____

For modern LDS members, it's difficult to put ourselves in the mindset of the LDS vs. RLDS competition from the 1800s, but it was a serious rivalry. It's important to understand the history to appreciate the origins of M2C and why it remains a hoax today.

After Joseph Smith died in 1844, there was a power struggle for leadership. While most members followed Brigham Young (the President of the Quorum of the Twelve), others followed various alternatives. Emma Smith, for example, remained in Nauvoo and believed Joseph's son should succeed him as President of the Church. There's a good summary here:
https://www.lds.org/study/ensign/1979/09/nineteenth-century-break-offs?lang=eng

In 1860, Joseph Smith III, son of Joseph and Emma, was ordained President of the Reorganized Church of Jesus Christ of Latter-day Saints.

Although both churches accepted the Book of Mormon and most of the revelations in the Doctrine and Covenants, they had doctrinal differences and competing historical claims.

Each claimed to be the rightful successor to Joseph Smith, Jr.

You can see how a serious rivalry would develop.

One of the issues the two groups differed on involved the Hill Cumorah.

In the late 1800s, an RLDS scholar named Elder H. A. Stebbins began teaching that the hill in New York where Joseph found the plates was not the Hill Cumorah of Mormon 6:6. You can read his teachings in the table below. 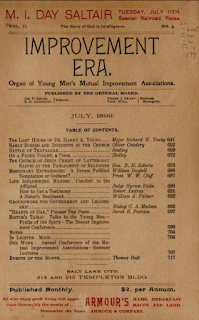 In the July 1899 issue of the Improvement Era, President Joseph F. Smith published President Cowdery's Letter VII, which declares it is a fact that the Hill Cumorah in New York is the site of the final battles of the Jaredites and Nephites, as well as the location of the depository of Nephite records (Mormon 6:6).
Here's the link to the cover page:https://archive.org/stream/improvementera29unse#page/n0/mode/2up.Here's the link to the page where Letter VII starts.https://archive.org/stream/improvementera29unse#page/652/mode/2upIn the context of the rivalry between the LDS (President Joseph F. Smith) and the RLDS (President Joseph Smith III), the republication of Letter VII just when the RLDS scholars were beginning to teach M2C is significant.
_____

Joseph F. Smith was President of the Church from 1901 to 1918. In 1909, he sent Elder George Albert Smith of the Quorum of the Twelve Apostles and his wife Lucy to Palmyra with the assignment of buying the Hill Cumorah and the Joseph Smith Sr. farm. (Geroge Albert Smith was named for his grandfather, a cousin of Joseph Smith Jr.)

Before leaving Salt Lake City, George and Lucy sewed $20,000 in cash into Lucy's skirt. When they arrived in Palmyra, they were able to buy the old Smith farm, but the owner of the Hill Cumorah, Pliny Sexton, refused to sell. Later, he offered to sell at an exorbitant price, but the Church declined to pay that much. Four years after Sexton died, the Church purchased the property in 1928.

In April 1928 General Conference, President Anthony W. Ivins spoke at length about the Hill Cumorah, re-affirming the teaching of Letter VII and D&C 128:20 that this is the very hill spoken of in Mormon 6:6. I've discussed that before here: http://bookofmormonwars.blogspot.com/2017/03/conference-classics-president-anthony-w.html

What makes this all the more interesting is the book published by RLDS scholars in 1924. Titled New Light on American Archaeology, the main author, L.E. Hills, quotes extensively from H.A. Stebbins, who Hills credited as the originator of M2C. [The text is in the table below.]
_____

Late 1800s: RLDS Elder Stebbins begins teaching that the hill in New York is not the Cumorah of Mormon 6:6.

1899: LDS President Joseph F. Smith republishes Letter VII in the Improvement Era., reaffirming the long-accepted teaching that it is a fact that the hill in New York is in fact the Cumorah of Mormon 6:6.

1924: RLDS Elder Hills publishes New Light on American Archaeology, declaring it is a fact that the Hill Cumorah of Mormon 6:6 is in Mexico.

1928: LDS Church President Heber J. Grant purchases the Hill Cumorah in New York and President Anthony W. Ivins reaffirms the fact that this is the Cumorah of Mormon 6:6.

1938: Elder Joseph Fielding Smith, a 20-year member of the Quorum of the Twelve and Church Historian, writes an editorial in the Deseret News about M2C, stating "LOCALE OF CUMORAH, RAMAH, AND RIPLIANCUM. This modernistic theory of necessity, in order to be consistent, must place the waters of Ripliancum and the Hill Cumorah some place within the restricted territory of Central America, notwithstanding the teachings of the Church to the contrary for upwards of 100 years. Because of this theory some members of the Church have become confused and greatly disturbed in their faith in the Book of Mormon. It is for this reason that evidence is here presented to show that it is not only possible that these places could be located as the Church has held during the past century [i.e., in western New York], but that in very deed such is the case."

1975: In General Conference, President Marion G. Romney delivers an address titled "America's Destiny" that reaffirms the teaching that the hill in New York is the Hill Cumorah of Mormon 6:6. 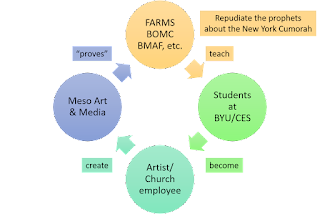 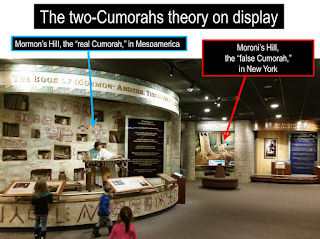 1990: In response to questions arising about Cumorah, the entire First Presidency (Ezra Taft Benson, Gordon B. Hinckley, and Thomas S. Monson) personally approve a letter that declares "The Church has long maintained, as attested to by reference in the writings of General Authorities, that the Hill Cumorah in western New York state is the same as referenced in the Book of Mormon."

2019: Gospel Topics Essay on Book of Mormon Geography released. The first version quotes President Ivins 1929 General Conference talk explaining the Church has no position on Book of Mormon sites other than Cumorah. When it is pointed out that President Ivins also specifically reaffirmed the New York Cumorah in his 1928 General Conference talk, the Gospel Topics Essay is revised to omit the original quotation from President Ivins. The essay provides no references to teachings about the New York Cumorah for readers to consider.

Current Status: Church members are free to believe whatever they want. However, previous teachings by Church leaders about the New York Cumorah cannot be discussed in Church settings, especially not at Church history sites in Palmyra. Only books and organizations that promote M2C can obtain licenses from the Church to use the current official edition of the Book of Mormon. CES and BYU specifically teach M2C as part of the official curriculum.

In the table below, you can read what RLDS scholar Hills wrote to explain M2C. Anyone who has read the material published by the M2C citation cartel will recognize the arguments.

For readers who aren't as familiar with the arguments for M2C, here is a summary:

1. Cumorah cannot be in New York because New York is too far from Mesoamerica.

2. Joseph never said Cumorah was in New York. All historical evidence to the contrary is wrong because Lucy Mack Smith, David Whitmer, Oliver Cowdery, and others are unreliable witnesses.

3. Letter VII is false because Oliver never claimed a revelation to support Letter VII. His visits with Joseph and others to the Nephite depository of records in the Hill Cumorah were actually only visions of a hill in Mexico.

4. Joseph passively accepted the New York Cumorah tradition because he was an ignorant speculator who learned Book of Mormon geography not from Moroni, but from a popular travel book published in 1841.

5. Every LDS Church leader who affirmed the New York Cumorah was wrong. Every RLDS scholar who taught M2C was correct.
_____

Here is the text of Hills' book. Click on the links to see the actual documents.