The recent leak of a draft Supreme Court opinion has made abortion a major topic in the news lately.*

As always, I emphasize that I don't care what anyone thinks. I'm interested in the psychology behind belief and the types of arguments people make. Whether you are pro-life or pro-choice, M2C or NY1C, I encourage you to look at this comparison analytically and objectively.

The key distinction between the abortion arguments is this: One side can say exactly what they think and what they want. The other has to use the fog of argument, in this case the "laundry list" persuasion tactic, because it's a little embarrassing to say in public what their position is.

We have a similar situation with the Cumorah issue. One side can say exactly what they think; i.e., that the prophets were correct about the New York Cumorah. The other has to use the fog of argument (such as the laundry list) because it's a little embarrassing in LDS circles to openly declare that the prophets were wrong about the New York Cumorah.

People opposed to abortion (pro-life) can state their reasons clearly and in public. The pro-life argument goes like this: my religious belief or intuition says that life begins at conception, that life is sacred, and that life shouldn't be ended for any reason.

It's a clean argument that people are proud to say in public, openly and without lots of rationales, explanations, etc.

By contrast, those who favor abortion access (pro-choice) tend to skirt their real argument, which is: They value their own quality of life, including financial  and personal freedom and choices, over that of a merely potential life. But that sounds selfish.

Instead, they obscure the argument with rhetoric based on choice and freedom, using "laundry list" persuasion to avoid clarity. They hope that if they give 10 reasons, people are going to think, "You know, I don't know that much about this issue, but if there are 10 reasons... Ten reasons are way more than one. Way more than three. Even if I don't understand the reasons, I don't need to get into the details when there are 10 reasons."

Making an argument based on quantity is persuasive by itself; it doesn't matter whether any of the reasons have merit.

The laundry-list tactic is designed for weak arguments. But the pro-abortion people do not have a weak argument. They have a strong argument that has one weird quality: They don't want to say it in public.

Their argument is strong from a persuasion perspective. If they said their actual argument, favoring their personal freedom over what they consider potential life, we could say, "Oh, that's a pretty strong argument, even if I don't agree with it."

They also invoke particularly tragic and rare cases that generate understandable sympathy, then transpose those exceptional situations onto the far more common cases of personal convenience.

The abortion debate is essentially a disagreement about assumptions.

To the Left, their starting assumption is this fetus might be a baby, and might not. It's a "maybe baby." They frame the debate as being over the value of the "maybe baby." If you think a fetus is something that could be, or might not be, a life, then you go the direction of why should I let my life be determined by something that's a maybe.

On the other side, people think that conception produces life that is sacred.

Many people seek to balance the two interests by recognizing exceptions in exceptional situations.

Those who accept the New York Cumorah (NY1C) assume the prophets told the truth.

Those who reject the New York Cumorah in favor of M2C (the Mesoamerican/two-Cumorahs theory) assume the prophets were wrong. 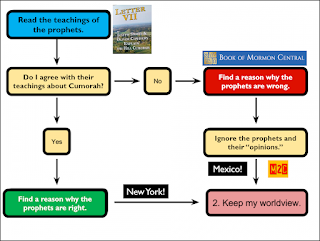 Thus, those who still believe what the prophets have taught about Cumorah (NY1C) can state their reasons clearly and in public.

It's simple and clear: we know the Cumorah of Mormon 6:6 is in western New York because (i) Moroni told Joseph Smith about it the first time they met, (ii) Joseph, Oliver (Letter VII) and their successors reaffirmed that basic point, and (iii) the extrinsic evidence corroborates those teachings.

By contrast, those who advocate M2C (or any other non-New York Cumorah) use the fog of argument, including laundry lists, to soften their repudiation of the teachings of the prophets. There are dozens of examples at FAIRLDS, Book of Mormon Central, the Interpreter, Meridian Magazine, the old FARMS database, etc.

For an LDS audience, outright rejection of the teachings of the prophets is generally unpersuasive. Knowing this, M2C proponents are clever enough to provide a laundry list of reasons, as we've seen many times on this blog. Some of them have even created numbered lists of reasons why Cumorah cannot be in New York, including the absence of volcanoes and the presence of snow.

M2C promoters make convoluted, irrational arguments such as their claim that (i) because Joseph Smith was the nominal editor of the Times and Seasons in 1842, (ii) he must have approved of anonymous editorials that claimed ruins in Mesoamerica were left by the Nephites, (iii) which means that he must have implicitly (yet silently) rejected the New York Cumorah (iv) because New York is "too far" from Mesoamerica.

They usually ignore the historical and extrinsic evidence that supports the New York Cumorah, including the fact that Joseph's own brothers republished Letter VII both before and after those 1842 editorials.

When they do address the NY1C evidence, they attribute it to a false tradition created by early Latter-day Saints who merely speculated about Cumorah. They say Joseph Smith passively adopted the false tradition. They say Lucy Mack Smith's memory was poor, or she was confused, or she incorporated false traditions. They say David Whitmer and Martin Harris and Oliver Cowdery adopted the false tradition, and that Oliver Cowdery misreported what Moroni told Joseph Smith. They say Oliver misled people when, as Assistant President of the Church, he declared unambiguously that it was a fact that the Cumorah of Mormon 6:6 is in New York.  They say all of Joseph's contemporaries and successors who have ever addressed the topic were wrong.

Because they, the scholars, know better.

Hence, the M2C advocates resort to laundry-list arguments and other sophistry to persuade the Latter-day Saints to unknowingly reject the teachings of the prophets about Cumorah!

*Pro-choice activists claim the Supreme Court decision would deprive people of abortion rights, but that's a misleading tactic of thinking past the sale because the issue is really about who decides: the U.S. Supreme Court or the states. Reasonable people can disagree about that.

Abortion advocates know that people are more likely to respond emotionally to losing something than to potentially gaining something. Loss aversion is more persuasive, so framing it as "losing a right" is effective persuasion, but it's an analytical red herring.

And, of course, the leaked opinion was a draft that might not even be the final opinion of the Court, which means this could end up be a controversy about a hypothetical.