I've often explained that I think everyone involved with Book of Mormon studies has good intentions.

Members of the M2C citation cartel promote M2C because they actually believe it and they want to use their evidence to persuade people to accept the Book of Mormon. 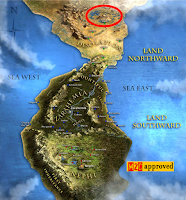 And that's fine with me.

It's the same for those who promote all of the multiple working hypotheses, whether it's Baja, Panama, South America, Heartland, Malaysia, New York, or even the BYU fantasy map. For that matter, many critics are also well-intentioned. It's easy to be confused by the various claims, particularly when leading LDS scholars explicitly reject the teachings of the prophets.

But because they repudiate those teachings, they don't like anyone to focus on those teachings. They don't want Latter-day Saints to even know what the prophets have taught about the New York Cumorah.

Incredibly, the efforts of the M2C citation cartel seeped into the groupthink among many Church historians as well.

For example, see my latest installment of my review of Real vs. Rumor, here:

I'm one of many who changed my mind about M2C after decades of accepting what the "experts" taught, including specifically Jack Welch (FARMS/Book of Mormon Central), Dan Peterson (FARMS/Interpreter), and Scott Gordon (FairLDS). They're all great people, faithful Latter-day Saints, etc., but they share a distrust of the ability of Latter-day Saints to make informed decisions.

They don't want people to make informed decisions. M2C thrives only in an environment of ignorance and control.

In fact, if you reject M2C in favor of the teachings of the prophets, M2Cers will accuse you of apostasy. It's awesome.

A much simpler, wholesome, and productive approach would be for everyone to lay out all the facts, state assumptions, inferences, and threads, and they explain hypotheses. With multiple working hypotheses, everyone could make informed decisions harmoniously.

There is zero need for or utility in contention over these issues.

But the M2C citation cartel continues to refuse to adopt this model of multiple working hypotheses.

For years, the M2C citation cartel has downplayed the teachings of the prophets about the New York Cumorah. They consistently refuse to inform Latter-day Saints about the evidence that corroborates those teachings.

It's a ridiculous claim. Everyone who knows the "Heartlander" working hypothesis knows it is based on the teachings of the prophets about Cumorah, not on any political agenda. There are Heartlanders among the Latter-day Saints throughout the world. Non-American Latter-day Saint Heartlanders couldn't care less about American politics, but the M2C proponents don't care about that reality.

At this point, the best we can do is continue to educate ourselves and those around us, encouraging them to make fully informed decisions.