How to create some doctrine

I'm offering this post in the spirit of "let's get real." I'm observing historical reality here. I'm not criticizing anyone because, as I've emphasized for a while now, I don't blame anyone for Mesomania. That said, we can't fix mistakes if we don't identify and acknowledge them.

On my Mesomania blog, I've started a series looking at the techniques that are being used to perpetuate and promote the Meosamerican theory. Some of that is technical and maybe too detailed for most readers, so I wanted to call your attention to an important point I touched on there.

Let me start by observing that you can't make this stuff up.

For many years, Mesoamerican proponents have cited a 1993 fax from "the office of the First Presidency" to support their two-Cumorahs theory. You can still see it being used on FairMormon here. I included a copy of the fax at the end of this post.

This is FairMormon's quotation from the fax:

The Church emphasizes the doctrinal and historical value of the Book of Mormon, not its geography. While some Latter-day Saints have looked for possible locations and explanations [for Book of Mormon geography] because the New York Hill Cumorah does not readily fit the Book of Mormon description of Cumorah, there are no conclusive connections between the Book of Mormon text and any specific site.
—Fax from the Office of the First Presidency to FARMS, April 12, 1993.

In at least one commentary, Mesoamerican proponents represent this as a letter coming from the office of the First Presidency.

It turns out, this 1993 fax was sent by a secretary and consists of nothing more than a plagiarized rewording of a 1992 article in the Encyclopedia of Mormonism (EOM) titled "Cumorah."

That article, in turn, was written by David A.Palmer, author of In Search of Cumorah. In Search of Cumorah is an extensive justification for the two-Cumorah theory that doesn't even mention Letter VII, let alone discuss it. It's an awesome piece of work that I've discussed on this blog before and is featured in one of my videos. Plus, it is cited repeatedly in Meso literature, including in An Ancient American Setting for the Book of Mormon, Mormon's Codex and Traditions of the Fathers, as the go-to explanation for why Cumorah cannot be in New York and is actually in southern Mexico. (Well, one of the go-to references; the others are the articles by John Clark that I've also addressed).

You can see the EOM article on Cumorah here: http://eom.byu.edu/index.php/Cumorah
or here: http://contentdm.lib.byu.edu/cdm/compoundobject/collection/EoM/id/4391/show/5649.

Now, compare the language of the fax to the article:

Fax: While some Latter-day Saints have looked for possible locations and explanations [for Book of Mormon geography] because the New York Hill Cumorah does not readily fit the Book of Mormon description of Cumorah, there are no conclusive connections between the Book of Mormon text and any specific site.

Palmer: Because the New York site does not readily fit the Book of Mormon description of Book of Mormon geography, some Latter-day Saints have looked for other possible explanations and locations, including Mesoamerica. Although some have identified possible sites that may seem to fit better (Palmer), there are no conclusive connections between the Book of Mormon text and any specific site that has been suggested.

The "fax" is just a plagiarized rewording of Palmer's article, which predates the fax.

Here is what the Palmer article looks like when it is edited to become the fax from the First Presidency.

You just have to move Palmer's first sentence to the middle, change and delete a few words, and voila, you've created an important announcement from the First Presidency that refutes Letter VII and endorses the two-Cumorah theory!

Even better: you have the First Presidency endorsing David Palmer's theory in Palmer's own words!

By citing the "office of the First Presidency," FairMormon implies that Ezra Taft Benson, Gordon B. Hinckley, and Thomas S. Monson reworded Palmer's article and faxed it to FARMS.

While it's possible the First Presidency reworded Palmer's article and faxed it to FARMS to refute Letter VII and support the two-Cumorahs theory, does anyone really believe that?

[NOTE: If it turns out that the First Presidency actually did plagiarize the EOM article and send it to FARMS for this purpose, I'll readily edit this post to so indicate here.]
_______________

I've been criticized by some LDS scholars for using the term "citation cartel," but this is such a beautiful example I'll go through it step-by-step.

1. David Palmer writes his book justifying the two-Cumorahs theory.
2. His book is cited by several Mesoamerican proponents, including some of the most prominent books that promote the Mesoamerican theory, such as An Ancient American Setting for the Book of Mormon (Deseret Book and FARMS), Mormon's Codex (Deseret Book and the Neal A. Maxwell Institute for Religious Scholarship) and Traditions of the Fathers (Greg Kofford Books).
3. Palmer he gets the job to write the Cumorah entry in the Encyclopedia of Mormonism, in which he cites his own book as authority.
4. Then a staffer from in the Office of the First Presidency plagiarizes the article by rewording it a little and faxes it to FARMS.
5. FARMS then uses it to sow doubt about the New York Cumorah.
6. FairMormon puts it on their web page to give an implied endorsement by the First Presidency of the two-Cumorah theory.
7. All the usual suspects endorse the Palmer material, including FARMS, FairMormon, BMAF, and Book of Mormon Central.

It's a wonder to behold how the citation cartel works, for sure, but this is what passes for LDS scholarship about Mesoamerica.

As far as I can tell, not a single LDS scholar or educator has objected to this methodology before.

It is this behavior that led me to the only explanation that makes sense to me: the psychology of Mesomania. 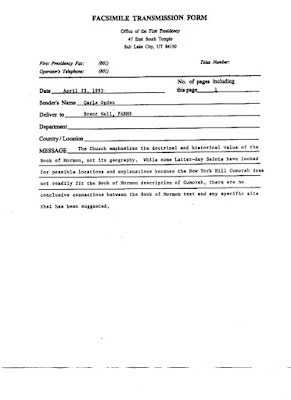 Link to FairMormon for more background:
http://en.fairmormon.org/Question:_Did_the_First_Presidency_identify_the_New_York_%22Hill_Cumorah%22_as_the_site_of_the_Nephite_final_battles%3F
Posted by jonathan3d at 10:03 AM