"Thirst was made for water; inquiry for truth." 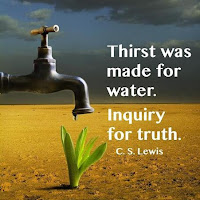 That quotation comes from “C.S. Lewis: An examined life” (2007).* It's a wonderful metaphor. So long as we continue to inquire, we can find the truth.

As we finish up the Book of Mormon in our Gospel Doctrine classes for 2017, I wanted to comment a bit on Lesson 46: By Faith All Things Are Fulfilled.

Here is the purpose of Lesson 46:

To help class members understand the importance of 1) exercising faith, 2) being humble, and 3) heeding the counsel of the prophets.
I have three general comments.

First, I hope everyone who accepts the Book of Mormon and the counsel of the prophets understands the reason why Joseph and Oliver specifically identified the location of the Hill Cumorah. Certainly they didn't have to. Joseph and his successors also didn't have to republish Letter VII (Seven) so many times. But I think they had prophetic insight and they knew the historicity of the Book of Mormon would be questioned in the future. Maybe it requires a little faith and humility to accept what Joseph and Oliver wrote, but they were clear and unambiguous. There is nothing more damaging to faith than to have LDS scholars and educators undermine the reliability and credibility of Joseph and Oliver, and I hope they stop it soon.

Second, one of the reasons why it's important to be unified about Cumorah is the portion of the lesson manual that focuses on Ether 13:1-12. "Moroni records Ether's prophecies concerning the promised land." The manual summarizes the teachings here: "Before the Second Coming, “a new Jerusalem should be built up upon this land [the Americas]” (Ether 13:6). The New Jerusalem will be a holy city built by a remnant of the house of Joseph (Ether 13:8)." It's essential to know where the promised land is because of the covenants associated with it, as Ether spelled them out.

By now, readers of this blog will detect the bit of Mesomania there. The bracketed phrase [the Americas] is a nonscriptural gloss on the passage designed to accommodate a non-New York Cumorah. I realize some will say I'm reading too much into it, but if you've read as much of the work of the Mesoamerican proponents as I have, you'd recognize it to.

Ether, observing the final battles in New York, "saw the days of Christ, and he spake concerning a New Jerusalem upon this land." He knew that "a New Jerusalem should be built up upon this land, unto the remnant of the seed of Joseph." And now Joseph Smith learned that the place would be western Missouri.

When Ether spoke of "this land," he was referring to the area encompassed by Cumorah, where he was writing, and the New Jerusalem. We learn from Joseph and Oliver that this is the land between New York and Missouri--exactly the land inhabited by the Jaredites and the Nephites. It's all spelled out for us.

Third, I like to think of Ether and Coriantumr. They knew each other well. After teaching Coriantumr's people about the promised land and the New Jerusalem, he told Ether that he would live to see "another people receiving the land for their inheritance." Coriantumr would be buried by them. Of course, this was fulfilled when Coriantumr "was discovered by the people of Zarahemla," as recorded in Omni.

I envision this happening when Coriantumr, as the last survivor, decided to travel to the New Jerusalem. Naturally he would have traveled down the rivers toward the west on his way to what we now call Missouri, but on the way, the people in the Land of Zarahema found him. I've described all of this in Mormoni's America.
____________________________

[NOTE: I cross-posted this at my Gospel Doctrine blog, here.]