Saints and the "hill of considerable size" 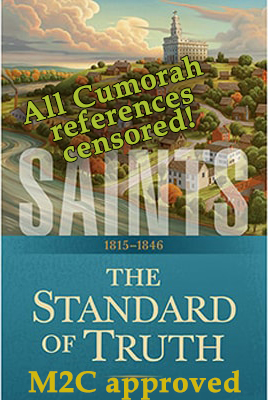 In their essay about the censorship of the word Cumorah in Saints, the editors claimed they "followed the lead" of Joseph Smith because his 1838 history did not mention Cumorah. He simply referred to it as a "hill of considerable size."

At first glance, that might look like a plausible explanation. I suppose there are some readers of the essay who wouldn't know any better.

But the editors of Saints know better.

Unlike Saints, the 1838 history was not written for members of the Church. It was written for the general public who were unfamiliar with the Church, had never read the Book of Mormon, and would have had no idea what Cumorah meant.

Explaining Cumorah would have required a long digression beyond the scope and intent of the 1838 history.

In other words, referring to Cumorah in the 1838 history would have been confusing to the intended nonmember audience.

By contrast, in his September 1842 letter to the Church published in the Oct. 1, 1842, Times and Seasons (now D&C 128), Joseph Smith referred to Cumorah without further explanation.

The reason: he was writing specifically to members of the Church who were all familiar with the New York Cumorah thanks to Letter VII, which had been republished many times, including in the Times and Seasons in 1841.

All members of the Church in Joseph Smith's day knew Cumorah was in New York.

Saints creates a false historical "narrative present" because it portrays Joseph and his contemporaries as people who had never heard of Cumorah.
_____

Sadly, there's another way to look at this.

Thanks to revisionist Church historians who are erasing the New York Cumorah everywhere they can, as they did in Saints, many of today's members of the Church, like nonmembers and like the characters in Saints, don't know what the prophets and apostles have taught about Cumorah.

Maybe the editors realized that most Church members today are ignorant of what the prophets and apostles have taught, so they figured referring to Cumorah would be confusing to readers.

There are two problems with that approach.

First, it's not the explanation they gave. Instead, they said they censored Cumorah to "uphold" their idea of "neutrality" about Book of Mormon geography, a late 20th century concept created by M2C intellectuals.

Second, creating a false narrative present to keep modern Church members ignorant of the teachings of the prophets and apostles is the opposite of the declared objective of Saints.

If the purpose of Saints is to educate members of the Church about actual Church history, portraying characters in their authentic "narrative present," then the censorship of Cumorah is inexcusable. The book should be revised ASAP.
_____

I discussed all of this on my SaintsReview blog. You can read that post here:

That post also discusses a problem in the 1838 history that has caused confusion. That history originally said that the messenger who visited Joseph Smith in 1823 was Nephi, not Moroni. It was published this way in the Millennial Star and in the Times and Seasons.

The mistake has always been blamed on a "clerical error."

That explanation doesn't make sense, though. Why would Joseph's clerks come up with the name Nephi in the first place? Would they have invented it out of thin air?

Furthermore, why would Joseph allow it to be published that way in the Times and Seasons if he was the actual editor of the paper? Why was it not corrected until after Joseph's death?

It's an interesting detail that also involves Saints, because the editors chose to include a phony story about Mary Whitmer being shown the plates by Moroni, even though she said the messenger was "Brother Nephi."

I think they used the phony story for the same reason they censored Cumorah.