My blog statistics tell me I have 122 draft posts I've forgotten about. That's more than the days left before I start a new assignment, so I probably won't post all of them.

Here's one that is timely, though. It was part of a series about "clarity vs confusion" that illustrates this table:


By now, readers here know that the M2C intellectuals and their employees and followers conflate (or mix together) the two clarity teachings so they can create the three confusion teachings.

Well, they have to admit that every prophet and apostle who has ever formally addressed the issue has confirmed that Cumorah is in New York, but they say all these prophets and apostles were wrong.

When they confuse members of the Church by conflating (or mixing up) teachings #1 and #2, the M2C intellectuals and their employees and followers can evade accountability for repudiating the teachings of the prophets.

Their treatment of President George Q. Cannon is a good example.
_____

FairMormon, a member of the M2C citation cartel, provides a list of statements about Book of Mormon geography from the 19th Century.

They just omit statements they don't want people to know about.

For President Cannon, FairMormon provides an editorial attributed to him that focuses on point 2 above. You can see it at this link. Below in this post I inserted the entire statement, including the parts FairMormon censored.

What FairMormon doesn't tell readers is that President Cannon made a very specific statement about Cumorah in a book he wrote about the Prophet Joseph Smith.

During his description of Joseph's visit to the hill Cumorah in New York, President Cannon explained what Moroni taught Joseph:

Many precious truths the angel now imparted to him: telling him that he, Moroni, while yet living, had hidden up the plates in the hill, four centuries after Christ, to await their coming forth in the destined hour of God's mercy to man; that he, Moroni, was the son of Mormon, a prophet of the ancient Nephites, who had once dwelt on this land; that to the Nephites this sacred hill was known as Cumorah, and to the Jaredites (who had still more anciently inhabited this continent), as Ramah; and much more did he impart to Joseph concerning the mysteries of the past, and the future purposes of Almighty God in the redemption of fallen mankind.

Add this to the long list of teachings of the prophets that the M2C intellectuals reject.

But M2C believers don't want to understand what President Canon said because they've been trained to believe the prophets are wrong.

(Sadly, the missionaries currently serving in Palmyra also don't know what President Canon said, a topic of an upcoming post.)

When M2C believers do actually read these words and realize their significance, they see the phrase "it is my opinion that" written in otherwise invisible ink throughout. That invisible ink entitles them to disbelieve President Canon.
_____

Look at another teaching of President Cannon's that FairlyMormon omits:

Here's an excerpt from a post on this topic that I made a year ago:

Way back in 1890, President George Q. Cannon observed in the Juvenile Instructor that the First Presidency has never published or approved of a map of Book of Mormon geography because there are so many uncertainties.
From 1880 to his death in 1901, President Cannon served as First Counselor to Presidents John Taylor, Wilford Woodruff, Lorenzo Snow, so he was well qualified to express the views of the First Presidency. He served with Joseph F. Smith, who was Second Counselor from 1880 until he became President of the Church in 1901. Joseph F. Smith was editor of the Improvement Era during this time.
In 1899, nine years after President Cannon published his comment about Book of Mormon geography, President Joseph F. Smith published Letter VII in the Improvement Era. This demonstrates that, from the perspective of the First Presidency, teaching that Cumorah is in New York is consistent with neutrality on the rest of Book of Mormon geography. That position has also been explained by other prophets.

You can read Letter VII in the 1899 Improvement Era here: 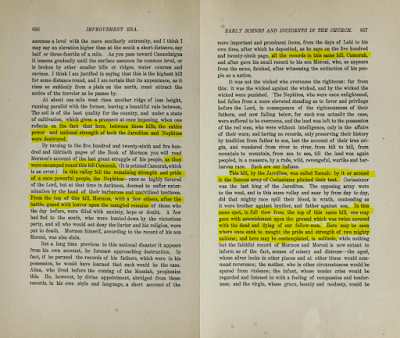 Below I provide it with the parts FairlyMormon omitted in red.

There is a tendency, strongly manifested at the present time among some of the brethren, to study the geography of the Book of Mormon. We have heard of numerous lectures, illustrated by suggestive maps, being delivered on this subject during the present winter, generally under the auspices of the Improvement Societies and Sunday Schools. We are greatly pleased to notice the increasing interest taken by the Saints in this holy book. It contains the fullness of the gospel of Christ, and those who prayerfully study its sacred pages can be made wise unto salvation. It also unravels many mysteries connected with the history of the ancient world, more particularly of this western continent, mysteries which no other book explains. But valuable as is the Book of Mormon both in doctrine and history, yet it is possible to put this sacred volume to uses for which it was never intended, uses which are detrimental rather than advantageous to the cause of truth, and consequently to the work of the Lord.
We have been led to these thoughts from the fact that the brethren who lecture on the lands of the Nephites or the geography of the Book of Mormon are not united in their conclusions. No two of them, so far as we have learned, are agreed on all points, and in many cases the variations amount to tens of thousands of miles. These differences of views lead to discussion, contention and perplexity; and we believe more confusion is caused by these divergences than good is done by the truths elicited.
How is it that there is such a variety of ideas of this subject? Simply because the Book of Mormon is not a geographical primer. It was not written to teach geographical truths. What is told us of the situation of the various lands or cities of the ancient Jaredites, Nephites and Lamanites is usually simply an incidental remark connected with the doctrinal or historical portions of the work and almost invariably only extends to a statement of the relative position of some land or city to contiguous or surrounding places and nowhere gives us the exact situation or boundaries so that it can be definitely located without fear of error.
It must be remembered that geography as a science, like chronology and other branches of education, was not understood nor taught after the manner or by the methods of the moderns. It could nto be amonst those peoples who were not acquainted with the size and form of the earth, as was the case with most of the nations of antiquity, thought not with the Nephites. Their seers and prophets appear to have received divine light on this subject.
The First Presidency has often been asked to prepare some suggestive map illustrative of Nephite geography, but have never consented to do so. Nor are we acquainted with any of the Twelve Apostles who would undertake such a task. The reason is, that without further information they are not prepared even to suggest. The word of the Lord or the translation of other ancient records is required to clear up many points now so obscure that, as we have said, no two original investigators agree with regard to them. When, as is the case, one student places a certain city at the Isthmus of Panama, a second in Venexuela, and a third in Guiana or northern Brazil, it is obvious that suggestive maps prepared by these brethren would confuse instead of enlighten; and they cannot be thus far apart in this one important point without relative positions being also widely separate.
For these reasons we have strong objections to the introduction of maps and their circulation among our people which profess to give the location of the Nephite cities and settlements. As we have said, they have a tendency to mislead, instead of enlighten, and they give rise to discussions which will lead to division of sentiment and be very unprofitable. We see no necessity for maps of this character, because, at least, much would be left to the imagination of those who prepare them; and we hope that there will be no attempt made to introduce them or give them general circulation. Of course, there can be no harm result from the study of the geography of this continent at the time it was settled by the Nephites, drawing all the information possible from the record which has been translated for our benefit. But beyond this we do not think it necessary, at the present time, to go, because it is plain to be seen, we think, that evils may result therefrom.

Bio (from wikipedia): Cannon was born in Liverpool, England, to George Cannon and Ann Quayle, the eldest of six children. His mother and father were from Peel on the Isle of Man. His father's sister, Leonora Cannon, had married future Latter Day Saint apostle John Taylor and was baptized in 1836. News reached the elder George Cannon and four years later, when Taylor came to Liverpool, the entire Cannon family was baptized into the Church of Jesus Christ of Latter Day Saints; George Q. Cannon was 13 years old at the time. Cannon's siblings were Mary Alice Cannon (Lambert), Ann Cannon (Woodbury), Angus M. Cannon, David H. Cannon, and Leonora Cannon (Gardner). In 1842, the Cannon family set sail for the United States to join with the church in Nauvoo, Illinois. On the voyage over the Atlantic Ocean, Cannon's mother died. The motherless family arrived safely in Nauvoo in the spring of 1843. George Sr. married Mary Edwards in 1844 and had another daughter, Elizabeth Cannon (Piggott).
In Nauvoo, Cannon's father sent him to live with his uncle and aunt, John and Leonora Taylor. Cannon worked in the printing office of Times and Seasons and the Nauvoo Neighbor for Taylor, who was an editor of both periodicals. In June 1844, Taylor accompanied Joseph Smith, Hyrum Smith, and Willard Richards and others to Carthage Jail. There, Joseph and Hyrum were killed, and Taylor sustained serious bullet wounds. Cannon tended the printing affairs while Taylor recovered. This training would serve him well in later life.[3] Cannon's father died in 1845.
In 1846, Taylor traveled to England to organize the affairs of the church after Smith's death. Meanwhile, Cannon accompanied Taylor's wife and family as they moved to Winter Quarters, Nebraska. When Taylor returned, Cannon traveled with the entire Taylor family to the Salt Lake Valley, arriving in October 1847.
Posted by jonathan3d at 7:00 AM