Yesterday I attended the FairMormon annual conference in Provo, Utah. It cost me $50 to see 7 presentations. 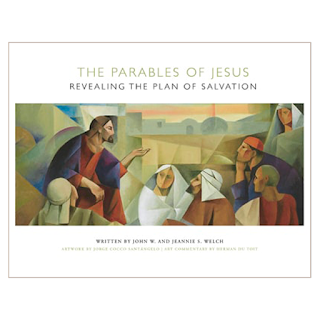 The first was excellent. John W. Welch and his wife Jeannie gave a presentation on their impressive book titled The Parables of Jesus: Revealing the Plan of Salvation. It contains wonderful illustrations by  Jorge Cocco Santangelo.

If you're familiar with the parables, you'll enjoy their thoughtful and even innovative observations. I highly recommend this book.

During his presentation, Brother Welch discussed the many ways that these parables can be interpreted. They have been interpreted artistically, theologically, linguistically, and any other way you can think of.

There is a tremendous irony here that did not seem to occur to Brother Welch, but was obvious to his audience (at least to me).

Brother Welch has been advocating M2C for decades. He has enforced M2C at FARMS, BYU Studies, and Book of Mormon Central.

He refuses to allow Book of Mormon Central to even show a comparison of M2C with other interpretations of the text, especially any interpretation that would support the teachings of the prophets about the New York Cumorah.

Brother Welch is a wonderful scholar and educator. He's a great person, a faithful member of the Church, etc. But he has this obsession with M2C that continues to puzzle me. I think M2C is undermining his legacy and reputation, and it's all so unnecessary and even tragic.
_____

The other presentations yesterday were fine. Nothing notable, except two funny incidents during the Q&A.

One speaker discussed the Eight Witnesses. During Q&A, someone asked what he thought about the two sets of plates (referring to the Harmony and Fayette plates). He said he was unfamiliar with that idea (naturally, because he only reads M2C material).

But Scott Gordon, the President of FairMormon who knows about the two sets of plates because he was in a presentation I gave about that history, leaned into the microphone and said, roughly, "That would make things more complicated." The audience laughed.

Readers here know how the two sets of plates makes things more complicated for M2C advocates. If the Hill Cumorah really is in New York, their whole theory collapses.

Afterward, I gave the speaker a copy of Whatever Happened to the Golden Plates? Whether he reads it or not is another question, of course, and I suspect that if anyone from FairMormon saw he had a copy, they would tell him not to read it, the same way an Evangelical would tell someone not to read the Book of Mormon. M2C cannot survive without censorship.

The second funny incident was during another Q&A. The speaker was asked what he thought about the Heartland movement. I'm told he replied, "They're a bunch of crazy fundamentalists."

That comment says it all. Now, if you still believe what the prophets have taught, you're ridiculed by the FairMormon intellectuals as a "fundamentalist."

That pretty well sums up the M2C citation cartel.
_____

Today one of the speakers is Tad Callister, who will discuss his latest book, A Case for the Book of Mormon. I posted a review of that book here:

It's a brilliant piece of marketing. Brother Callister quoted extensively from the M2C citation cartel and praised their work. In return, Book of Mormon Central heavily promotes his book. They posted positive reviews on the Deseret Book web page, etc. It turns out that Brother Callister is donating the proceeds from the book to Book of Mormon Central.

Everyone who buys a copy of the book is contributing to the dissemination of M2C around the world.

We have to admire their audacity.