Informed decisions: why not?

There is a lot of talk lately about a "faith crisis," both within the Church and in society as a whole. Here's a graphic depicting a recent values survey by the WSJ. 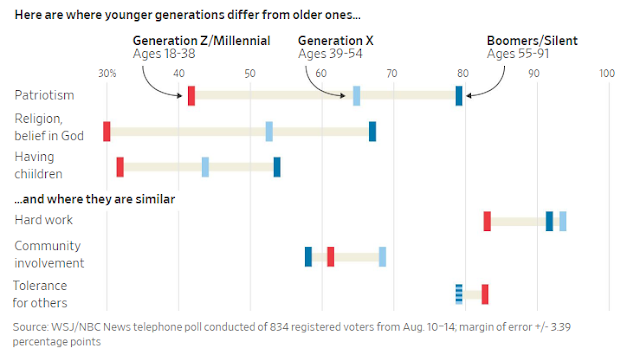 People propose lots of ideas about why younger generations think differently. Everyone has his/her own theory, experience, anecdotes, etc., but there is a general consensus that young people don't like being told what to think. This leads them to truly hate censorship and being lied to.

I do, too. Most people do, or at least claim they want to.

For decades, I delegated my inquiries about Book of Mormon historicity and Church history to LDS scholars. I thought they had evaluated all the relevant evidence and reached solid conclusions. I accepted M2C on that basis. I was busy with my career, family, etc. We can't research everything.

But eventually, problems with M2C led me to seek more information. I discovered I had been misled by these LDS scholars, who had suppressed important information (and continue to do so). I sought information from a variety of sources to make informed decisions. That's what led me to reject M2C after 30 years of relying on these influential LDS scholars.

I suspect that many people, once they discover the ongoing censorship from M2C intellectuals, become disillusioned and don't look further. That's an understandable reaction. It is the approach taken by the M2C citation cartel that is inexcusable.
_____

The entire world deserves to know about these things. People everywhere deserve the opportunity to make informed decisions about the claims of the Church.

And so do the members.

This is why I object to the ongoing practice of so many LDS intellectuals to portray their own opinions at the only truth. They are especially arrogant and unjustified to teach people to repudiate the teachings of the prophets just because they disagree with them or think they've expired.

The specific examples we focus on in this blog are M2C and the peep stone-in-a-hat theories. This week we'll look in more depth on how those ideas have been promoted and will be promoted like never before in the next few months.

All I've ever asked of these intellectuals is to allow members to learn about all the facts so they can make their own informed decisions. Side-by-side comparisons are especially helpful, but the M2C intellectuals and revisionist Church historians refuse to allow that.

But we should all be able to agree that full disclosure is the only way people can make informed decisions that endure.

Instead, we have an M2C citation cartel that censors everything except M2C. We have revisionist Church historians who have embraced the peep stone-in-a-hat narrative and impose it on everyone else.

Members of the Church, as well as people everywhere, deserve to know that there are still many members who believe the teachings of the prophets, starting with Joseph Smith and Oliver Cowdery, regarding such basic ideas as the New York Cumorah and the translation of the plates. These aren't crazy "fundamentalists" as some LDS intellectuals claim (such as one of the speakers at the recent FairMormon conference), but these are rational, faithful, spiritual people who are well informed and have made decisions based on all the facts.
_____

There's a highly ironic article in Meridian Magazine, a member of the M2C citation cartel.

Jeff Lindsay makes some good points in the article. What he wrote here about the Book of Abraham also applies to M2C, but he seems oblivious to that because he is an influential proponent of M2C.

There are many times when the proclamations of scholars clash with religious belief. Sometimes good scholarship leads the way to revising old misunderstandings, and other times when questionable scholarship undermines faith improperly. In this case, there may be some unfortunate biases that have influenced the work and teachings of two prominent scholars. Their particular perspectives should not be viewed as definitive or endorsed by the Church. It’s possible for since [sincere] and devout members of the Church to hold their particular viewpoints, but it’s important for members to recognize the gaps in their work in order to leave room for other possibilities.
_____

(If you're not on Mormon-Library@yahoogroups.com, you should be.)

The review mentioned something important so I'll quote it here:

It is interesting that Brooks' conclusions corroborate a highly confidential report put together by an anonymous group of Mormon scholars in 2013 for the General Authorities titled "LDS Personal Faith Crisis." Although that report is not generally available, I was able to obtain a copy, and the similarities with Brooks' conclusions are striking. A lengthy summary of that report may be found here: https://www.ldsdiscussions.com/blog-faith-crisis-report#!

Since the General Authorities have not chosen to make that report available even to members, this book by Brooks may serve as a more accessible answer to those Mormons and non-Mormons who ask why a devout Mormon would leave the church.http://associationmormonletters.org/blog/brooks-disenchanted-lives-apostasy-and-ex-mormonism-among-the-latter-day-saints-reviewed-by-richard-packham/

I also have a copy of the "LDS Personal Faith Crisis" study, which was a factor in the development of the Gospel Topics essays. It includes about 40 pages of case studies that are similar to the personal experiences people write to me about all the time.

I think it's apparent to everyone by now that the Gospel Topics Essays have, by and large, failed to fortify faith. Instead, they have caused many people to lose their faith. IMO, the primary reason is not because they're "revealing" anything new, but because of their equivocal approach to the issues.

We'll discuss that more later this week.
Posted by jonathan3d at 10:00 AM