I was going to discuss the FairMormon conference, but I've been hearing a lot about the peep-stone vs. Urim and Thummim issue so let's discuss another element of that saga. There's plenty of time to discuss FairMormon later.

And for those asking, I will discuss the connection between the peep stone narrative and M2C.

But today we need to discuss an important news item.
_____ 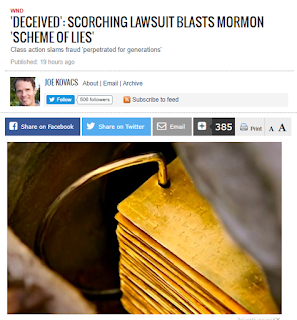 A federal lawsuit has been filed based on the claims of the revisionist historians.

Basically, this is the case:

the plaintiff is claiming she was deceived because for decades Church leaders have taught Joseph Smith's version of Church history instead of William E. McLellin's, but (according to her and the revisionist Church historians), McLellin was correct. 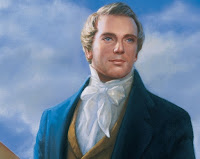 Joseph Smith: I translated the engravings on the plates with the Urim and Thummim that I found with the plates.

This was also taught by Oliver Cowdery and all their successors as leaders of the Church of Jesus Christ of Latter-day Saints.

William E. McLellin: Joseph didn't translate the plates; he just read words that appeared on a peep stone in a hat.

This was also taught by David Whitmer and others who left the Church of Jesus Christ of Latter-day Saints, along with revisionist Church historians, the Saints book, the Gospel Topics Essay on Book of Mormon Translation, Anthony Sweat's artwork, etc.


Now that our revisionist Church historians have established McLellin's version instead of Joseph's, this plaintiff says she was deceived.

Aside from the legalities, I often hear about members who have left the Church after these Gospel Topics Essays were posted. In some cases, the former members said they never knew this "history," even though there's nothing in those essays that hasn't been around for a long time. The distinction between the peep-stone-in-a-hat and the Urim and Thummim has been clear since at least 1834, although our revisionist historians have recently created a false historical narrative present to combine the two narratives.

In most cases, I don't think it's the information in the essays that is the problem.

Instead, it's the idea that the revisionist Church historians are promoting McLellin's version instead of Joseph's that people find troubling.

Seeing McLellin's version being taught through Church media is highly troublesome for many people, especially when BYU professors are saying his version is correct and Joseph's is not.

If the lawsuit makes it past a motion to dismiss, what would the defense be? What would you say to this plaintiff? What do you tell friends and family who are troubled by this issue?

Do you follow the teachings of the revisionist Church historians and tell them you now accept McLellin's version of the translation instead of Joseph's?

Or do you tell them you still accept the narrative taught by Joseph and Oliver instead of McLellin's?
_____

I haven't seen the complaint in this case, but based on the news report, there are several possibilities.

When I was practicing law, I would occasionally attend meetings of trial lawyers who discussed and coordinated approaches to large-scale litigation. They would strategize about forum selection, ideal plaintiffs, new theories of liability, etc.

This case could be a one-off, isolated situation that will be dismissed on motions. Or, it could be part of a large-scale coordinated effort that will eventually involve thousands of plaintiffs.

Either way, it seems likely that the case will focus more attention on the Joseph Smith vs. William E. McLellin issue like never before.

It's easy to imagine the presentation of the case. The plaintiff enters into evidence (i) the teachings of the prophets over the years, starting with Joseph and Oliver; and (ii) the work of the revisionist historians who claim to be telling the "real" story (McLellin's version).

Next, someone will probably sue because our M2C intellectuals have determined that Joseph, Oliver and all the other prophets/apostles were wrong about the New York Cumorah, as we'll see on display at the FairMormon conference....

Interesting times.
Posted by jonathan3d at 7:00 AM