In a day when the Gospel Topics Essays, the Saints book, Book of Mormon Central, the Interpreter, and even the Ensign openly teach things that, in past generations, were taught only by critics and apostates (things that were specifically opposed by Church leaders at the time), it doesn't seem surprising that the topic of "faith crisis" is on the minds of so many members of the Church.

Readers contact me all the time with questions about friends, family, and ward members who have left, usually over credibility issues; i.e., they can no longer believe the basic truth claims because LDS intellectuals have promoted such hoaxes as M2C, the peep stone-in-a-hat, and the unreliability of the teachings of the prophets.

Note this: we're talking here about Church employees and intellectuals. No member of the Quorum of the Twelve or First Presidency has ever repudiated the teachings of their predecessors about the New York Cumorah or these Church history issues.

The specific example I discussed in a recent series on this blog involves the peep stone vs. the Urim and Thummim. This week, this and other revisionist Church history ideas will be featured prominently at Education Week.

I love Education Week. There are dozens of inspiring, faith-affirming classes that are awesome.

However, I estimate that about a week from now, as they leave Education Week, tens of thousands more Latter-day Saints will leave Provo believing that Joseph Smith did not translate the Book of Mormon with the Urim and Thummim that came with the plates.

Instead, they will believe he translated the Book of Mormon by reading words that appeared on a peep stone in a hat, while the plates sat nearby, useless and covered with a cloth.

Of course, this means that Joseph and Oliver misled the Church when they consistently and persistently said Joseph translated the Book of Mormon by using the Urim and Thummim that came with the plates.

But according to Book of Mormon Central and other M2C intellectuals and revisionist Church historians, Joseph and Oliver misled the Church about lots of things.
_____ 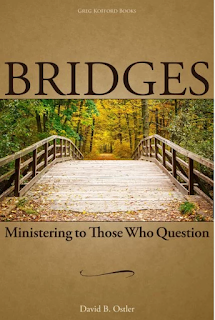 This example surfaced in comments to a review by Jana Riess of the book Bridges: Ministering to Those Who Question by David B. Ostler.

In the absence of information, leaders sometimes “jump to conclusions because they need to explain it and understand it.” These include the ideas that people are lazy, they are sinful, or they got offended.

Ostler decided to test those ideas on two different populations. In addition to the Faith Crisis Member Survey mentioned above, he also conducted a parallel “Local Leader Survey” in which he asked bishops, Relief Society presidents, and other leaders why they think people leave.

The disconnect was startling. For example, 84% of local leaders said that people leave because they don’t want to live the commandments, but only 9% of Faith Crisis respondents said that actually applied to them.

Instead, they said they were concerned about problems in Church history, the Church’s stance on LGBT issues, unequal gender roles, judgmentalism, and other issues.

The topics of LGBT, gender roles, and judgmentalism are outside the scope of this blog, but many of the concerns about problems in Church history are unforced errors that past prophets and apostles addressed repeatedly in the clearest words.

But today's M2C intellectuals and revisionist Church historians have erected barriers to faith that are very difficult for many people to overcome.

These intellectuals seem to enjoy the complexity of remaining faithful in the face of all these supposedly perplexing issues they raise. But really, the explanations given by Joseph and Oliver are simple, straightforward, and, by virtue of their callings, prophetic.

Rather than accept what the prophets have taught, our intellectuals send people down the rabbit holes of Mesoamerica, two Cumorahs, the peep stone-in-a-hat, and so much more.


_____
The comments to Riess' article include the following exchange. The comments from Danny are typical of many of those who have left the Church or have declined further meetings with the missionaries.

What else are people such as Danny supposed to conclude once they read the hoaxes perpetuated by modern intellectuals?

Howard Kay • 5 days ago
I think there are a few aspects of this situation that Dr. Riess' article touched on, but did not emphasize. (? Perhaps the book did not get into these?)

That's the idea of "how did these bishops (et al) 'know' why these Mormons left? What was the source of their "knowledge"?

It would appear that in fact they had no real knowledge of the reasons these individuals left. Rather, they appear to have made up reasons that would be satisfying to the LDS authorities.

The first obvious question that raises is, "why?" My guess is that the "answers" were very satisfying to all concerned, and reinforced their ideas about LDS beliefs and culture.

And I think this situation raises another interesting question: is there any in-depth curiosity among LDS authorities about these matters? My guess is that they learn quickly that curiosity is not a good characteristic!

worried American citizen  Howard Kay • 5 days ago
Or, perhaps those who left did not provide the "real" reason they left. Bishops are aware of many situations, but not al, and have no way to determine if anything they are told is the true and real issue, versus a distraction from or scapegoat for the true and real issue.

Danny  worried American citizen • 4 days ago
Your response presumes there is an inquiry by the bishop into a person's reasons for leaving. My experience, and plenty of others anecdotally, is neither most bishops nor most members want anything to do with that conversation. After tireless and faithful service of 50 years, my wife and I resigned. Except for a brief visit from a leader, crickets for years after. We've remained cordial to those we bump into once in a while. All those people who used to come up to us and tell us how much they loved us on Sunday? Not so much.

It seems that cognitive dissonance is mistaken for a "loss of the Spirit", rather than for what it really is--two mutually incompatible ideas vying for the same space. Just one example of many: Claim: Joseph translated the gold plates using the Urim and Thummim. Dissonance: No, Joseph used a seerstone he placed in a hat. The same seerstone he used when convicted of being an unruly person (bilking neighbors through treasure-seeking). More dissonance: Wait, we weren't taught about a seerstone in a hat in church. Why don't ANY of the church illustrations use in ANY programs show him with his face buried in his hat? And, if he was able to use the seerstone, then why did God make Moroni lug his abridgment around to hide it from the Lamanites?